British Columbia’s largest professional organizations have reported sluggish growth during the last year and over the past five years.

The median number of members at British Columbia’s top professional organizations grew just 0.6% over the past five years, according to data collected on Business in Vancouver’s Biggest Professional Organizations in B.C. list (https://biv.com/lists).

While this five-year growth was small, the median number of members recovered to above 2017 levels after falling in 2020 by 3.4%. The average number of members grew an even smaller 0.2% over the past year, suggesting that smaller organizations on the list grew more than larger companies higher on the list. Membership at organizations on the bottom half of the list grew an average of 4.2% in last year. That was almost triple the 1.6% membership growth rate for organizations in the top half of the list. Chartered Professionals in Human Resources (B.C. and Yukon) (No. 11) boasted the largest one-year growth on the list, increasing 13.3% to 6,800 members in 2021 from 6,000 in 2020 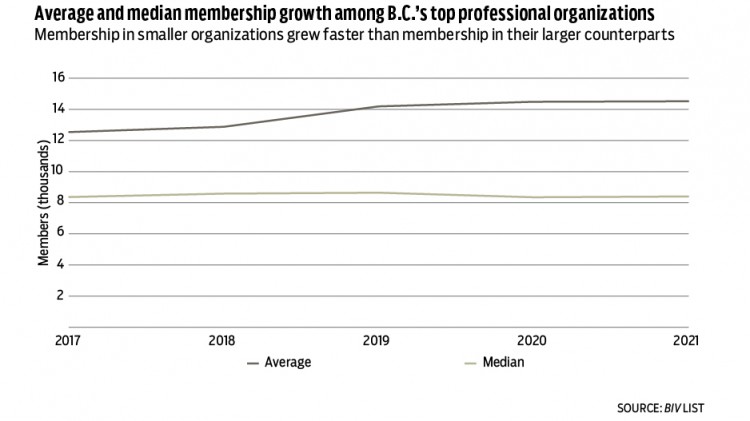 The five-year average growth in the number of members is significantly larger than the one-year average growth because of a jump in average membership in 2019. That year’s average growth rate was inflated as a result of the formation of the BC College of Nursing Professionals (BCCNP). The largest of its three component groups was the College of Registered Nurses of BC, which previously held the No. 1 ranking on BIV’s list. The BCCNP’s 2019 membership was 59,461, 10.8% higher than the combined 53,642 members of the three organizations before amalgamation. (BCCNP was amalgamated last year into the British Columbia College of Nurses and Midwives, ranked No. 1 on this year’s list.)  •