Metro Vancouver might miss out on Step 2 travel business boost

Some B.C. regions are expected to fare better than others now that British Columbians are free to travel around the province without restrictions.

Loosened restrictions that were confirmed June 14 are likely to be a boon to areas such as the Okanagan or Tofino, but Metro Vancouver tourism might not see the same bump in visitor traffic because its tourism businesses rely more heavily on U.S. and international visitors than do other parts of B.C.

The Lower Mainland is expected to reap some benefit from welcoming visitors from the rest of B.C., but the biggest wish of the region’s tourism advocates is for Ottawa to create a clear plan for opening international borders to non-essential visitors.

The U.S. border is set to stay closed to non-essential travel until at least June 21, and industry insiders told BIV that they expect its closure to leisure travellers to be extended by weeks, or even months.

Prime Minister Justin Trudeau said on the weekend that he spoke with U.S. President Joe Biden about how to reopen the two countries' border, while the two were at the G7 leaders' summit in Cornwall, England. He did not reveal any concrete details of an agreement with Biden, or with U.S. offiicials.

Trudeau is set to speak with provincial premiers on June 17 with more details on a plan for the border's reopening to leisure travel.

Forcing international tourists and business travellers to quarantine, or finance a three-day stay in a hotel, is an obstacle to rejuvenating the tourism sector, Tourism Vancouver CEO Royce Chwin told BIV.

Chwin said Metro Vancouver’s visitor economy includes a substantial amount of business travel and convention business, and this also needs to resume for hotels to thrive.

He added that large Vancouver conventions that have more than 1,000 attendees combine to generate more than $1 billion in economic activity annually pre-pandemic.

The B.C. government’s advisory for British Columbians to avoid non-essential travel to the rest of Canada is set to end no earlier than July 1, when its Step 3 of the restart plan is slated to kick in.

Despite this restriction, there remains no legal barrier stopping people from leaving the province. There is a fear, therefore, that some B.C. residents will travel outside the province to spend vacation money, instead of spending it closer to home.

This angst was amped up on June 9, when the federal government said that starting in early July, Canadians, permanent residents and essential workers who are fully vaccinated will not have to quarantine when returning from abroad. This new policy is to be in effect even though no national or global vaccine passport system yet exists to verify claims from these people that they have been vaccinated. 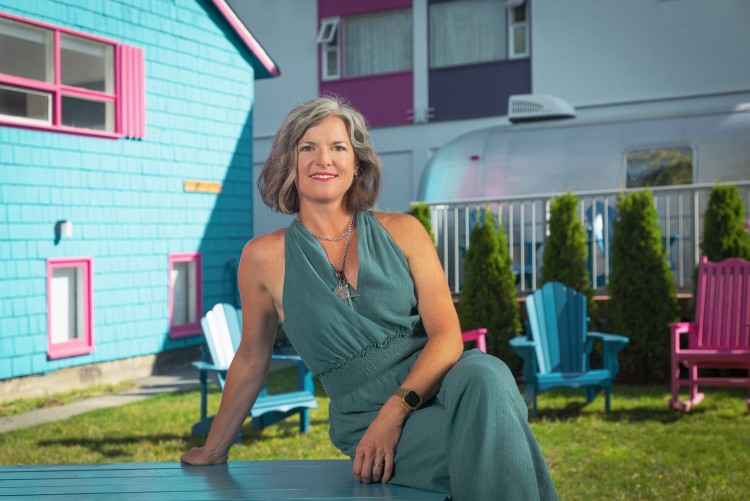 (Image: Mandy Farmer, who owns Hotel Zed and Accent Inns, plans to offer guests a 20% discount on their stays this summer | submitted)

To prevent British Columbians from being enticed to venture outside the province, government marketer Destination British Columbia has launched a summer campaign to keep B.C. travellers closer to home. It is set to include multicultural and social media, as well as advertising on television and in community newspapers and other print media.

Some B.C. hotels outside Metro Vancouver saw a surge in summer bookings when Premier John Horgan, on May 25, announced that British Columbians could travel freely around the province as early as June 15, British Columbia Hotel Association CEO Ingrid Jarrett told BIV.

Some hotels – in Tofino, Parksville, Qualicum and the Okanagan – could already be full, she said.

“What we need B.C. residents to do is to travel to Vancouver, and enjoy Vancouver this summer,” she said. “That is not something that B.C. residents historically do. A lot of B.C. residents have very specific places that they like to go to, and those places, for the summer, like last summer, are already full.”

Mandy Farmer, who owns the five-hotel Accent Inns chain and the three-location Hotel Zed chain, said bookings at her hotels increased after the premier’s May announcement, and she is hopeful that a torrent of new bookings will occur now that travel restrictions within B.C. have officially ended.

After all, BC Ferries' website crashed soon after the government's announcement yesterday that, starting today, travel around the province is allowed.

“We have really big expectations for Tofino,” she said. “We saw that last summer was really busy in places like Tofino, Kelowna, and even Kamloops, as a stopping-off point. The quieter properties were ones such as one near Vancouver airport.”

Farmer said her hotels operated at about 20% occupancy for much of the pandemic, and she hopes some of her busier hotels will be at 80% occupancy during the peak 2021 summer season. To encourage business, she is offering 20% off rates.

She is particularly urging Metro Vancouverites to visit Victoria, where she has both an Accent Inn and a Hotel Zed.

"Victoria is such a great destination," she said.

"It's quick to come over, on the ferry, and there's lots to see and do. One thing I love about COVID-19 is that it has really brought out our patio scene. Victoria is such a stunningly beautiful city. We've got all these patios now, and we've got an amazing local craft brewery scene." •