Despite record hatchery releases in 2019, commercial catch was one of lowest on record in 2020

The global abundance of Pacific salmon in 2020 was the lowest since 1982, according to new data released by the North Pacific Anadromous Fish Commission (NPAFC).

That’s despite a record number of hatchery fish being released the year before in 2019, which suggests ocean conditions – temperatures and abundance of nutrients, zooplankton and other food sources – are behind low ocean survival rates.

The NPAFC measures abundance of Pacific salmon based on commercial catch reporting from the five member countries: The U.S., Russia, Japan, Canada and South Korea.

According to commercial catch reporting, 322 million Pacific salmon were caught by commercial fishermen in 2020 – 606,000 metric tonnes – which was the lowest since 1982.

In Washington, Oregon, and California, the commercial catch for chum and sockeye salmon in 2020 was the lowest on record in 2020. 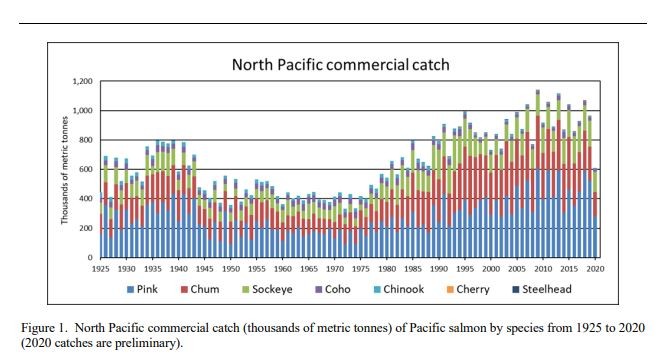 The main species for the commercial salmon industry are pink, chum, sockeye, coho  and chinook, with pink salmon accounting for nearly half (46%) of the harvest by weight, followed by chum (27%), sockeye (23%) and coho (3%). Chinook, Japanese cherry salmon and steelhead account for only 1% of the commercial harvest.

By far, Russia has the largest share of the commercial salmon catch, at 48%, followed by the U.S. (mainly Alaska) at 41%, and 10% by Japan. Canada’s share of the global Pacific salmon commercial catch is just 1%; South Korea’s is less than 1%.

Efforts are currently underway to get a better understanding of what happens when salmon migrate to the open ocean through a winter survey, an effort that was initiated by Dick Beamish, scientist emeritus from Fisheries and Oceans Canada’s Pacific Biological Station in Nanaimo.

In 2019, he assembled a team of scientists to conduct an open ocean survey.

This year, more salmon research surveys are planned for the western and northern Bering Sea, the northwestern North Pacific, and the southern Sea of Okhotsk.