Metro Vancouver’s biggest law firms have recovered from the downturn they suffered with the onset of the COVID-19 pandemic.

Over the past year, the average number of lawyers in the region grew by 3.3% to 83.8 in 2021, according to data collected on Business in Vancouver’s Biggest Law Firms in Metro Vancouver list (page 12).

That growth allowed top law firms to regain the loss in the average number of lawyers they suffered in 2020. Last year, during the pandemic, that number fell by 0.25% from 2019.

However, the median number of lawyers grew last year, despite the pandemic, and boasted twice that growth in 2021. This suggests that smaller companies lower on the list grew more than larger companies higher on the list.

Over the past year, No. 19 Cassels Brock & Blackwell LLP recorded the highest percentage increase in its number of lawyers by far: 29.4%, which is nearly double that of No. 16 Bennett Jones LLP, which had the second-highest growth rate on BIV’s list at 16.7%. 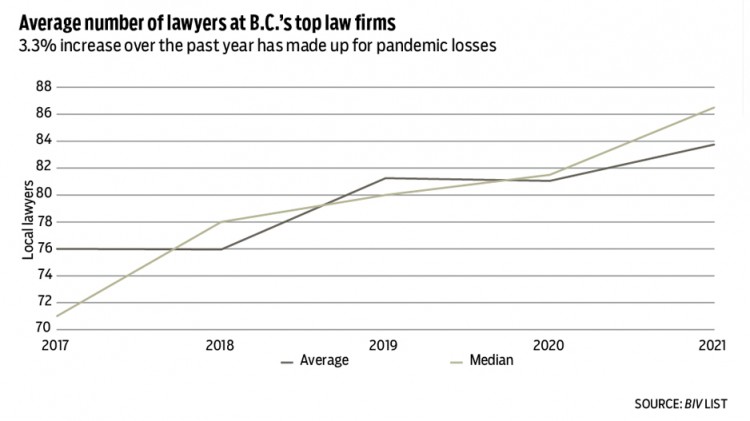 The average one-year growth in the size of companies on the list also doubled as the average increase in their number of lawyers increased 6.4% in 2021 compared with 2.6% in 2020.