By Nelson Bennett | July 22, 2021
Teal-Jones log broker Jack Gardner: “if you just removed all the old growth, mills would be down” | Rob Kruyt

B.C. is at another crossroads when it comes to logging on Vancouver Island, and how the B.C. government ends up trying to balance economy with ecology could have implications for the coastal forest economy and B.C.’s international reputation.

The last War in the Woods in Clayoquot Sound ended in 1993 with 900 arrests, international reputational damage and the eventual loss of timber cutting rights for forestry companies. The coastal annual allowable cut has shrunk by 8.5 million cubic metres since the 1990s, according to one estimate. The creation of the Great Bear Rain Forest alone took 6.4 million hectares. Only 295,000 hectares were preserved for logging.

Two companies – Teal-Jones and Western Forest Products (TSX:WEF), which have large tree farm licences on Vancouver Island, stand to be the biggest losers, if more old growth is removed from the coastal annual allowable cut.

“If you just removed all the old growth, mills would be down – three or four sawmills,” warned Jack Gardner, log broker for Teal-Jones. “It would [have] a big impact on the pulp mills, because at the end of the day, they rely on our byproduct to run their mills. Over 50,000 jobs are reliant on old-growth logging on the coast and in the Interior.”

Old growth makes up 27% of B.C.’s annual allowable cut (AAC), and 50% of the coastal AAC, said John Innes, dean of the faculty of forests at the University of British Columbia. He said a ban on old-growth logging would be “dire” for the coastal forest industry.

“Fifty-five per cent of the forest that’s cut annually on Vancouver Island is still old growth,” he said. “So if you were to stop that, you’re basically taking almost 50% of the cut away.”

The Pacheedaht, Ditidaht and Huu-ay-aht First Nations, which have their own economic interests in forestry, are also concerned about campaigns to further restrict access to old growth, and are increasingly impatient with anti-logging activists in their territories. In April, the Pacheedaht asked anti-logging protesters in their territory to “stand down” – a plea that has been ignored.

“It’s totally disrespectful,” said Robert Dennis Sr., chief councillor for the Huu-ay-aht First Nation. “They have total disregard for First Nation governance and authority, and that bothers me greatly.”

The Huu-ay-aht First Nation now owns 35% of Western Forest Products’ TFL-44. It also has a woodland licence and timber from its treaty lands. Old growth makes up 30% of Huu-ay-aht territory, which includes a portion of the Pacific Rim National Park, Dennis said.

In response to an Ancient Forest Alliance call for a halt to old-growth logging on Vancouver Island, the Huu-ay-aht warned that might infringe on the rights of those First Nations involved in forestry.

“The Ancient Forest Alliance report gives little consideration to the economic and social needs of First Nations,” the statement reads. “Just like the rest of B.C., we need to develop a strong and vibrant economy so we can look after the needs of our people. We will follow the guidance of our elders and citizens to make the decisions we think are right – we are asking others to respect that process and follow our direction on our territory.” 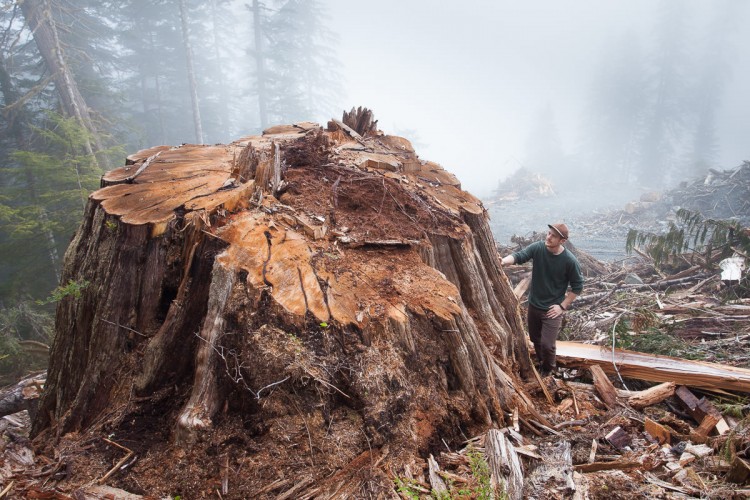 Ongoing protests against logging old growth on Vancouver Island have not yet reached the epic proportions of the Clayoquot Sound protests, but it is still early days.  To date, there have been more than 370 arrests for breaching an injunction, according to the Canadian Press, and a number of protests camps remain, despite an agreement between First Nations and the B.C. government to defer logging in the Fairy Creek watershed and Central Walbran for two years, and the striking of a new independent old growth advisory panel.

Jens Wieting, senior forest and climate change campaigner for the Sierra Club BC, said anti-logging campaigns continue because the announced moratoriums don’t cover all of the “at-risk” old-growth forests on Vancouver Island.

“We have not yet seen meaningful deferrals consistently addressing at-risk forests,” Wieting said.  The two deferrals are “steps the right direction, but they left out a lot of at-risk old growth forests,” he said.

The big concern is not old-growth forests in higher elevations, he said, which are less productive and less valuable to forestry companies, but in valley bottoms, where most of the cedar and Douglas fir giants are still found.

Environmentalists appear to be winning the battle for hearts and minds in B.C. A recent survey by Insights West and the Sierra Club found high levels of public support for more old-growth protection. B.C. government assurances that much of B.C.’s old-growth forests are already protected from logging can’t compete with photos of ancient cedar giants sawed off at the base in the scarred landscape of a recent cutblock.

But the whole debate around old-growth logging is confused by conflicting definitions and estimates.

Second-growth forests, after all, can contain very large trees that are already 250 years old. Some would consider these trees old growth. One definition of an old-growth forest is an intact watershed that has never been logged or otherwise disturbed by human activity. The B.C. government defines it as any forest with very old, large trees.

B.C.’s Old Growth Forests: A Last Stand for Biodiversity, a recent report by three independent forestry researchers who have since been appointed to the government’s five-person old-growth advisory panel, concluded that only 8% (415,000 hectares) of original intact old-growth forest remains in B.C. It also concluded that old-growth ecosystems with large ancient trees make up just 3%.

Not everyone agrees with their methodology, however. Innes said the estimates are based on a vegetation resources inventory, which underestimates productivity of mature forests. He took the unusual step of publicly weighing in on the controversy around logging and old-growth forests in a July 2 post.

“There has been a great deal of obfuscation, to the extent that the facts are quite difficult to ascertain,” he wrote. “For example, it has been stated that there is only 3% of old-growth left in the province of British Columbia. This is untrue.”

He cited provincial government estimates that there are 13 to 14 million hectares of old-growth in B.C., of which 10 million hectares are protected or otherwise excluded from the timber harvesting land base.

Resource Works recently pointed out that some estimates fail to include “millions of protected hectares of the Great Bear Rainforest.” According to Resource Works, Carmanah Walbran Provincial Park covers an area of 16,365 hectares, and the Clayoquot Sound Biosphere Reserve has a land base of 148,489 hectares, where industrial logging is banned and only selective harvesting is allowed.

Innes believes it is possible to save the colossal “monumental” trees from the chainsaw without a wholesale ban on logging in old-growth forests.

“We are talking about the giant trees,” Innes said. “There aren’t that many left. That’s where we’re getting into these small-percentage numbers that people are throwing around.”

“Within our area-based tenures, 70% of the old growth within Western’s tenure is already protected.”

In September 2020, the B.C. government released the report of its Old Growth Strategic Review Panel, and to date 11 areas containing old growth in B.C. have had harvesting deferrals implemented.

One of the tasks of the new advisory panel will be to create new inventory maps to guide the government in further decisions to protect the most at-risk areas of old growth. •