By Glen Korstrom | July 6, 2021, 8:09am
New Downtown Vancouver Business Improvement Association CEO Nolan Marshall: “Its diversity of uses, and the diverse audiences that those different uses will attract, is really the future of Granville Street” | Chung Chow

Optimism about post-pandemic vibrancy is rising on Granville Street in downtown Vancouver.

Granville Street restaurant owners and merchants are eager to welcome new business this summer, when part of the street closes to traffic on weekends to become a pedestrian mall.

As of press time, city staff were devising final details for the plan, which is expected to start July 24-25. Council unanimously endorsed the proposal, which has full support from area advocates, such as the Downtown Vancouver Business Improvement Association (DVBIA).

Excitement about future tenants in what is dubbed the Granville Entertainment District is also emerging.

Italy’s Crossmedia Group plans to lease 18,000 square feet in a project set to break ground later this year at 950 Granville Street, between the Roxy Cabaret and the corner 7-Eleven at Nelson street.

Developer and Bonnis Properties co-principal Kerry Bonnis told BIV that Crossmedia has agreed to lease a street-front retail unit in his planned new building, as well as an entire floor above, which would serve as a venue for a series of rotating exhibits.

The project is set to break ground this fall. The building will be four storeys tall, though Bonnis said it is engineered to allow for more storeys because he is still negotiating with the city to try to get additional density. If he gets approval to build higher, he will be able to pivot to the higher density even after construction has started. 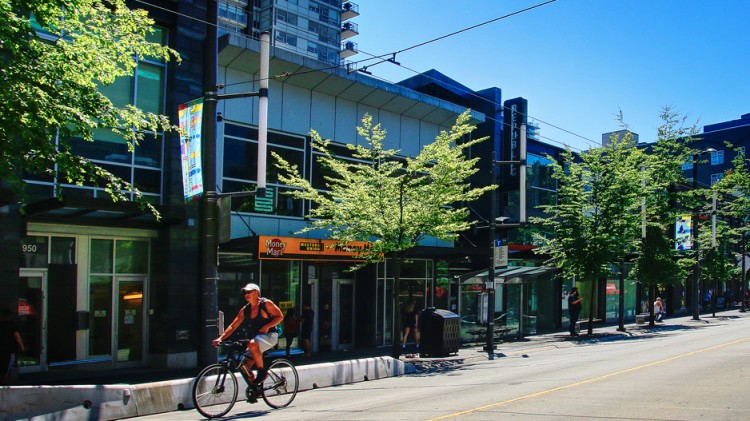 Bonnis and his brother, Dino Bonnis, own many properties on the Granville strip. The duo are seeking to rezone their property at the site of the Commodore Ballroom, to add storeys of office space above the landmark entertainment venue.

The Bonnis Properties work could help revitalize Granville Street, which has been in decline for the past decade, and where retail vacancies have soared in recent years.

Resonance recently produced a report on Granville Street for the DVBIA and documented the rise in vacant retail units.

However, Justason Market Intelligence (JMI) data shows that despite the street’s retail decline, it remains the top destination street for Metro Vancouverites.

JMI surveys in 2017 and 2019 found 51% of Lower Mainland residents said Granville Street was where they spent the “most time” when they visited the downtown peninsula. That beat Robson Street, which was the top destination for 46% of respondents in 2017, and 47% in 2019.

One big push now, according to Resonance’s report, is to transform Granville Street into a 24-hour, largely commercial street that has office tenants providing pedestrian traffic during the day, while entertainment and hospitality venues draws visitors by night.

“You don’t want a street that is entirely nightlife or entertainment,” said new DVBIA CEO Nolan Marshall. “Its diversity of uses, and the diverse audiences that those different uses will attract, is really the future of Granville Street.”

There are office tenants on the street.

Deloitte moved about 700 workers in 2019 to 78,000 square feet of renovated space at 939 Granville Street, which for decades had been the Tom Lee Music building.

The COVID-19 pandemic, however, prompted office employees at that address, and other nearby buildings, to work from home.

Deloitte managing partner for B.C., Étienne Bruson, told BIV that he expects his team to vacate its space on Granville Street and move into 117,000 square feet at 400 West Georgia Street when Westbank completes that 24-storey tower – likely in spring or summer 2022.

In many North American cities, central business districts are dominated with office skyscrapers, and work is the prime reason many visit. JMI’s surveys, however, have consistently found, since 2008, entertainment is the main reason most Metro Vancouverites visit the downtown peninsula.

Arguing that commercial density is the lifeblood of businesses on the strip, landowners and developers have long wanted faster zoning approvals, and city staff who are willing to entertain more density.

One common objection heard from panellists on a recent DVBIA webinar on Granville Street, and from Bonnis, is directed toward city council’s move to bring housing to the street.

“We will fight tooth and nail to ensure that there’s not an expansion of residential,” Bonnis said.

One of Bonnis’ bugbears is the B.C. government’s strategy to buy hotels and convert units to house homeless people.

“People in need, whether they be homeless, or they need social housing, they should have housing with dignity,” Bonnis said. “Putting them in a hotel room? That’s not the way to have a more inclusive city, and they shouldn’t be put on commercial streets.”

The last time the city spent money to redesign Granville Street was the 2008-09 initiative that included installation of the street’s distinctive vertical light columns, as well as benches and flex-parking zones that allowed cars to park on sidewalks at certain times. 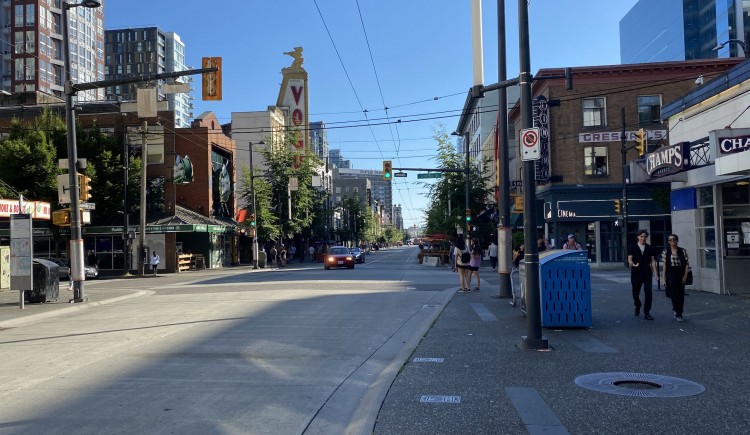 Granville Street would then have two lanes for vehicle traffic throughout the downtown area, with some of that being exclusively for buses.

Widening sidewalks into curb lanes south of Smithe Street would mean that the temporary patios that now sit in those lanes could be on sidewalks.

“That would be a great change,” Bonnis said. “We could make a lot of the current temporary patio locations permanent.” •