Hotel executives are pleased that B.C. so far has no requirement for them to confirm guests' vaccination status

While B.C. tourism and hospitality operators are eager to welcome foreign travellers, most realize that reopening international borders is no panacea.

Opening the Canada-U.S. border to fully vaccinated Americans starting August 9 and international borders to fully vaccinated foreigners starting September 7 is important, however, because foreign travellers will help fill hotels and restaurants, and they tend to spend more money than the average domestic visitor.

Advance notice of the new rules also provides clarity as to when non-essential visitors will be able to visit.

That provides hoteliers with at least a timeline for when to hire more staff. Their challenge now is to find and entice workers to accept hospitality jobs.

Even with new hires and a reopened border, many executives in the hotel sector say they expect this summer’s revenue to be far below that of 2019.

“In the short term, for Whistler, this summer is pretty brutal,” said Listel Hotel’s vice-president of hotel and restaurants, John Nicholson.

He explained that people tend to book vacations at least several weeks in advance, and that with COVID-19 still circulating, some people remain reluctant to travel.

One thing that Nicholson is pleased with is that his hotel employees are not expected to have to ask customers for proof of vaccinations.

"It's not for us to police, or anything," Nicholson said. "It's up to the government."

Public Safety Minister Bill Blair urged travellers to use Canada’s ArriveCan app, and said customs officials will accept “digital or paper proof of vaccination,” leaving the door open for a potential slough of judgment calls when individuals provide an array of vaccination certificates that are not all standardized.

Even if visitors do scan paper documents, issued locally, into the app, it coud be challenging for border officials to verify authenticity. This is in part why those who use fake documents to falsely claim that they are vaccinated face fines up to $750,000, and up to six months in prison.

Prime Minister Justin Trudeau said earlier this month that he was working with other countries to create an “internationally accepted proof of vaccination” for international travel, and added that provincial governments are free to create programs that involve digital or paper documents that would be necessary for someone to go to a restaurants, concerts or other events within that province.

Manitoba, for example, has created such a program.

The U.K. and Italy are some of the other countries that are putting in place similar systems to prevent those who are unvaccinated from entering various venues.

The trend prompted British musician Eric Clapton to stir controversy last week when he said that he would not perform in any venue that barred unvaccinated people from entering.

Florida is doing the exact opposite of these countries. That state passed a law that bans businesses from requiring proof from customers that they are vaccinated. This prompted Norwegian Cruise Lines to file a lawsuit against the state because, it said, Florida's law "threatens to spoil [the cruise line's] careful planning and force it to cancel or hobble upcoming cruises, thereby imperiling and impairing passengers' experiences and inflicting irreparable harm of vast dimensions."

B.C. provincial health officer Bonnie Henry said earlier this year that she opposed creating digital or physical cards for people to prove their vaccination status in order to enter a workplace or social venue. On July 27, however, she said that B.C. could "absolutely" go the route of France and have vaccination passes.

She specifically mentioned nightclubs as an example of a venue where these passes might be required.

"If I was running a nightclub, I would want to make sure that my staff are protected," she said. "Yes, we absolutely can say, 'To come in here, you have to be immunized.' That gives people the level of comfort that they are in a safer environment."

British Columbia Restaurant and Foodservices Association CEO Ian Tostenson, in contrast, said he would like his organization's members to be able to accept all guests regardless of vaccination status. He thinks that restaurant owners should be free to require vaccination certificates for entry into their establishments but he advises them not to do that, as it can put staff in a difficult position and may prompt altercations.

The Surrey Board of Trade has written to Prime Minister Justin Trudeau, B.C. Premier John Horgan and B.C. Health Minister Adrian Dix expressing support for what it calls a "Canada-wide approach to COVID-19 proof-of-immunization that could be easily used to confirm vaccination status for international and domestic use."

Even if B.C. does not create a vaccination-card system aimed at keeping unvaccinated people from socializing or getting into workplaces, the hospitality sector will be operating in a context that is far from ordinary.

“There’s no return to normal,” said Naramata Inn principal Kate Colley. “There’s not a quick fix to normal. It’s not going to be: ‘Oh, as soon as this is done, the border will open, and we’ll be back to normal.’“

She added that many potential customers remain reluctant to travel.

“There’s a bit of a disconnect between what customers think [about hotel safety] and what the real state of the hospitality industry is at the moment.”

Wildfires in the Okanagan have prompted evacuations, and hotel stays for evacuees, helping hotel owners.

Uncertainty about the threat, and the extent of Okanagan wildfires, however, only exacerbates reluctance to travel, Colley said. 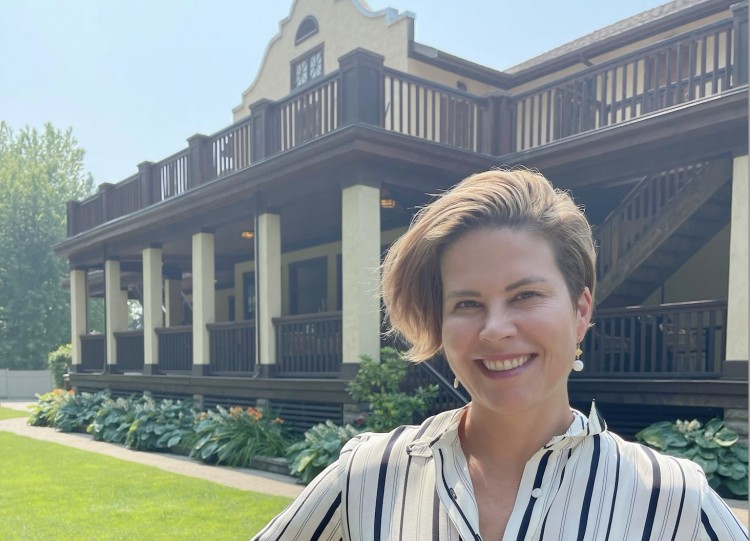 (Image: Naramata Inn principal Kate Colley fears that British Columbians' concerns about forest fires in the Okanagan could deter them from travelling to the region in the weeks and months ahead | submitted)

Stephen Roughley has a different take on recent events.

As general manager of the Victoria Marriott Inner Harbour and the area director for the Lower Mainland and Vancouver Island for Atlific Hotels, Roughley said the move to open international borders to non-essential travel will provide a huge bump in public trust.

It is “a really solid thing” to be opening borders, he said.

“There’s definitely a confidence through this. It’s really about the confidence in saying that it’s safe, and confidence that vaccinations have been completed. That’s a really good start.”

Only fully vaccinated Americans will be able to drive across the border for leisure, however, and the latest data shows that only about half of all U.S. residents are in that category.

Despite this, more confidence and predictability is on the way, Roughley added, because of the federal government’s recent announcement that it will allow large cruise ships to dock at Canadian ports starting November 1.

Major cruise lines are not likely to launch voyages to Alaska until spring 2022, but Roughley said the early end of the ban on cruise ships is likely to help cruise-voyage sales, and therefore be a boost for the tourism sector.

Recruitment could be a challenge

While all this is good news for the industry, the challenge of recruiting staff could become a more serious problem.

“This workforce shortage is what is holding us back,” BC Hotel Association president and CEO Ingrid Jarrett told BIV.

“Many workers transitioned into other occupations, such as into health care. There are thousands of hospitality workers that are now contracted by the government to facilitate the vaccination clinics.”

She added that her industry was facing a recruitment problem before the pandemic, and that the worker exodus from the sector during the pandemic has made the situation even worse.

While some see the tourism sector as the home of minimum-wage jobs, Jarrett said this is not the case.

Average compensation for hospitality-sector workers tends to be about $54,000 per year in B.C., she said. •