As condos move in, Kindred Community Farm Sanctuary needs to move out

By Hayley Woodin | July 9, 2021, 7:30am
Keryn Denroche is the volunteer executive director of Kindred Community Farm Sanctuary, which is actively looking for a new home | Chung Chow

Hundreds of individuals have been making donations to Kindred Community Farm Sanctuary, which has been looking for a new home for months.

“We've been actively looking for a new home, because we're in the middle of a rezoning in South Surrey. The property we're on is slated for condos,” said Keryn Denroche, the non-profit’s founder and executive director.

Kindred, which runs animal-assisted intervention programs, has until the end of September to find a new location for its 30 rescue animals.

To date, the organization has raised more than $417,000 – efforts which include two sizable donations from anonymous donors.

The non-profit is nearly halfway to raising the $1 million down-payment it needs to secure what Denroche hopes will be several acres of farmland.

“We put out a vision for a permanent home. We’d never have to move again with 10 acres of farmland,” she said.

In a normal year, Kindred helps hundreds of humans heal from trauma by pairing them with rescue animals who have also experienced abuse and trauma.

One of the programs Kindred offers is Healing for Healers, which has been helping local nurses work through the stress and trauma they’ve experienced as a result of the pandemic.

“A lot of it is that they have been unable to do self care,” Denroche explained. “Working with horses was a way to really slow them down. You have to be in the moment when you're with a large animal,” she added. “That's how we can get them in touch with how they're feeling … and help them through the pandemic. It’s pretty powerful.” 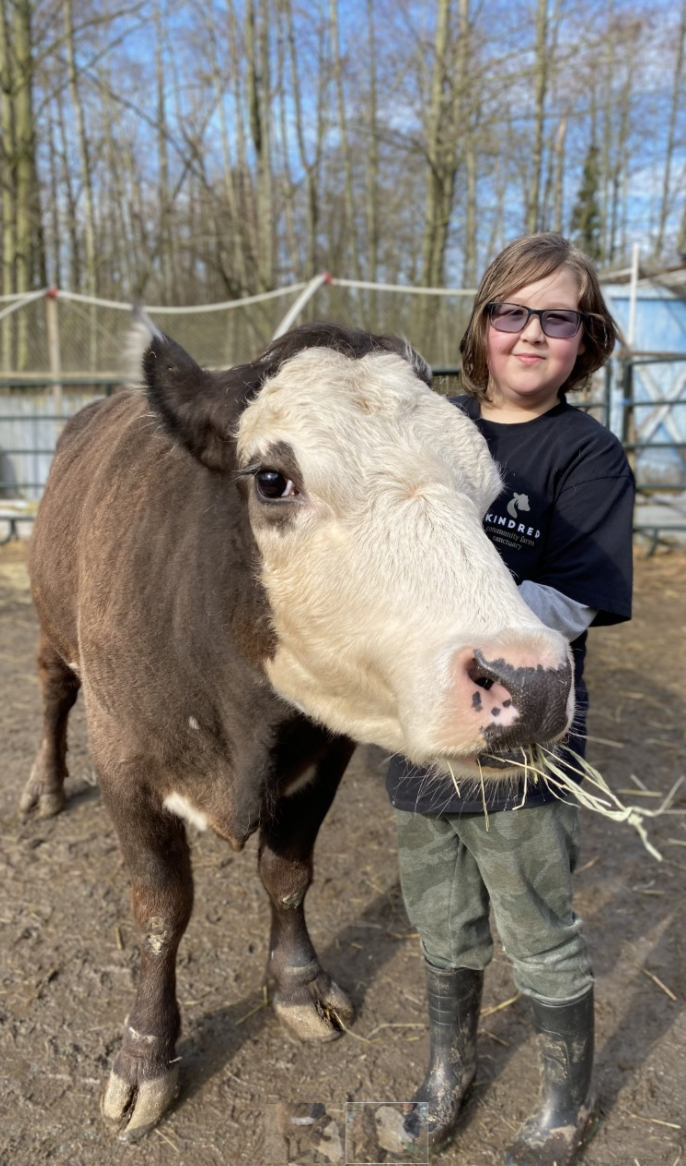 Logan participated in Kindred's programs for children, where he got to meet and connect with Gracie the cow, who is also partially blind | Submitted

It takes approximately $125,000 a year to keep Kindred operational. The organization relies almost entirely on about 100 volunteers, including Denroche. It has one part-time staff person – a clinical counsellor.

Denroche said that Kindred has had many conversations with the City of Surrey, the Township of Langley and other local agencies about its urgent need for a new space.

Over the past year, the organization has seen increased demand for its services, and continues to help those in need.

"I think mental health is such a high priority right now."