On Monday, city council advanced the bid by Marcon to build a 38-storey tower at the northwest intersection of Como Lake Avenue and Clarke Road

Burquitlam is about to get another high-rise.

Monday (July 26), city council advanced the bid by Marcon to build a 38-storey tower at the northwest intersection of Como Lake Avenue and Clarke Road.

Located in the Oakdale neighbourhood and close to the Burquitlam SkyTrain station, the future building will “celebrate this corner,” Marcon owner Nic Paolella told council during the two-hour public hearing, and provide a gateway to the city.

The building will have 333 condo units, 18,000 sq. ft. in common amenity space, ground-level commercial and three floors for office. As well, the Evergreen Extension line will cross over a tip of the property.

But its rental requirement will shift to another building, which also received second and third readings on Monday for rezoning.

As a result, the “density transfer” between the Como Lake/Clarke building and the rental complex, at 631 and 633 Smith Ave. and 708, 712 and 716 Dogwood St., will see the Como/Clarke property built exclusively for market units — a move that Coun. Bonita Zarrillo was against. 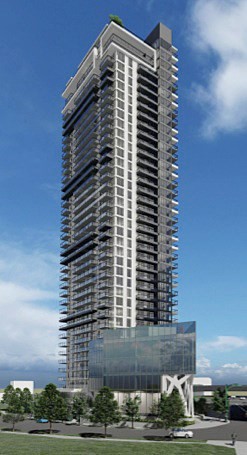 An artist rendering of the view from southwest, of Como Lake Avenue and Clarke Road in Coquitlam | Photo: City of Coquitlam

By comparison, the six-storey Smith/Dogwood building will have 126 rental suites, of which 37 units are designated as below-market and would be run by a non-profit housing provider.

During the public hearing, neighbours for both sites cited increased traffic with the extra density.

And, for the rental building application, the city received two letters and a petition with 31 names from homeowners in the Novella complex, across the street, in opposition. In general, they voiced concern about the potential loss of view and other negative impacts to their property values.

Still, Mayor Richard Stewart said the two-project combination is “everything that we’ve been pushing hard to achieve” and results in more rental housing than the city would have been able to incentivize for a developer.

As well, the rental building will be wood frame, meaning it will be able to go up quicker than a concrete structure. “We need more purpose-built rental,” the mayor said. “This is really important that it be done fast.” 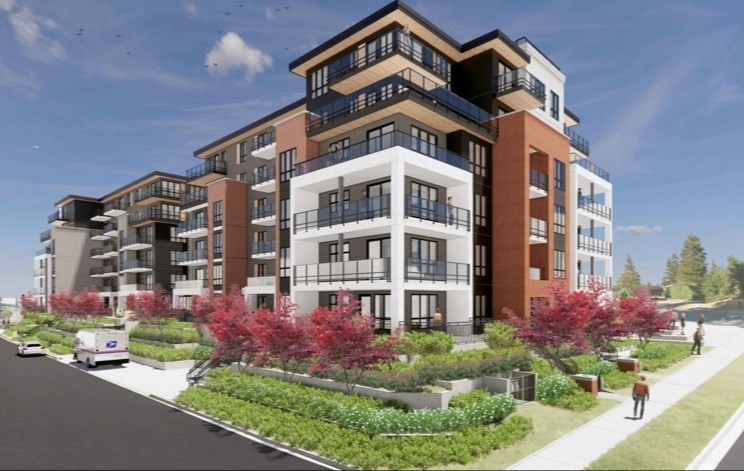 An artist rendering of the rental building (view from Smith Avenue and lane) | Photo: City of Coquitlam

Coun. Dennis Marsden credited Marcon for its community outreach, noting it was the first company in Coquitlam to ask for feedback during the COVID-19 lockdown last year via online platforms.

A few years ago, during discussions about the Burquitlam-Lougheed Neighbourhood Plan, council talked about “making sure what we didn’t see was these boring rectangles in the sky,” Marsden said in reference to the Como Lake/Clarke building. “This isn’t that. It’s got some very interesting lines to it.”

He also commented on the offices in the podium, and the jobs they will bring in for the city. 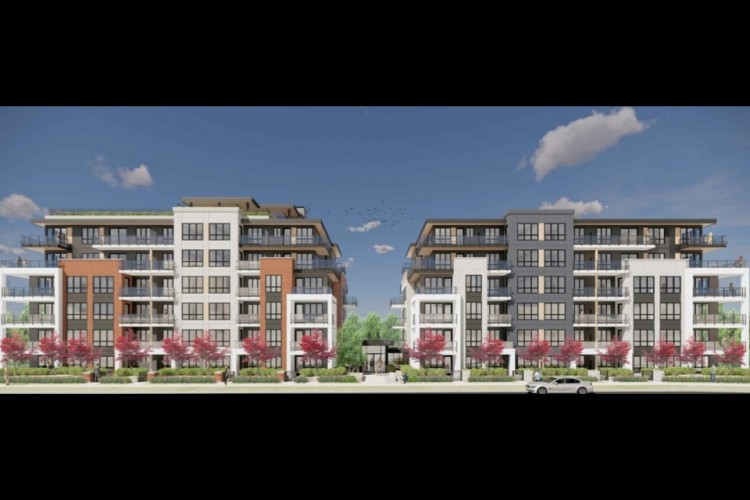 An artist rendering of the purpose-built rental complex at Smith/Dogwood | Photo: City of Coquitlam

If the Como Lake/Clarke building is approved at the fourth and final stages, the city would gain $4.3 million in development cost charges (DCC); $6.8 million density bonus fees; and $260,000 in voluntary community amenity contributions. As well, the municipality would profit from the sale of the proposed lane closure and surplus property.

As for the Smith/Dogwood rental property, which received unanimous council consent, the city would reap about $1.3 million in DCC plus $235,000 in community amenity contributions.

The Como Lake/Clarke high-rise is expected to take up to four years to construct.