Lougheed set for a boom with new strata and rental towers, plus an expanded community centre

While purpose-built market rental construction has been slow in recent years, Metro Vancouver condominium developers have started to pivot towards rental construction, according to Mark Goodman of Goodman Commercial, who publishes the Goodman Report on the multi-family market with partner Cynthia Jagger.

And one of the biggest pivots is in Burnaby, where a developer is looking at a massive rental development in the Lougheed area.

The movement to rentals should not be surprising: sales of multi-family rental buildings are on a frantic pace this year, notching $1.64 billion worth of transactions through the first six months of 2021.

First-half sales were 45% higher than the entire 2020 annual total and appear on pace to hit the third-highest annual sales volume ever recorded, according to Goodman.

The developer is claiming the title of “largest rental housing development in Metro Vancouver” for its project. 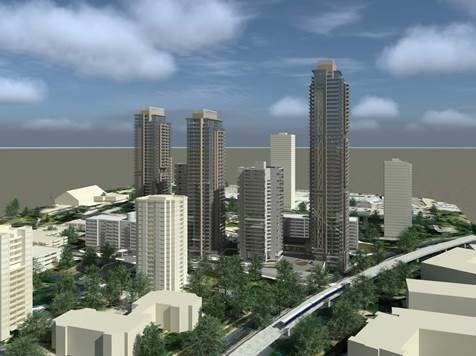 An artist's rendering of the proposed towers for the new Lougheed Village development. The three tallest towers in the image are the proposed buildings, totalling 1,200 rentals between them | Photo: Starlight Developments

In all, Starlight Developments is planning its Lougheed Village development at Erickson Drive and Salish Court – near to but not part of the major City of Lougheed development at Lougheed mall. The project is set for 1,200 units between three purpose-built rental highrise towers.

With 1,200 new units planned for the development, Lougheed Village is expected to house a total of 1,728 units, with the site already home to 528 rental suites in four highrise towers.

The three new towers are expected to reach 48, 39 and 36 storeys, according to Starlight, and the existing buildings have been renovated in recent years.

“What makes this project significant is not just the addition of 1,200 new rental suites, but also the preservation of 528 existing residences,” Starlight head of development and construction Josh Kaufman said in a news release. “We’re extending the life of the existing suites and transforming the community through the addition of three new towers and best-in-class resident amenities and landscaping.”

The latest estimate of the city’s vacancy rate sits at 1.3% (one- and two-bedroom suites) to 1.7% (three-bedroom), with the vacancy rate at 1.5% for studios. According to the housing needs report, a “healthy” vacancy rate is considered to be between 3% and 5%.

In its news release, Starlight noted it plans to build everything from studios to three-bedroom apartments, along with amenities such as a daycare, a gym, a pool, kids’ play structures and gardens.

The project came after Starlight bought the property in 2015 from Beach Properties of Vancouver, which may have made as much as $70 million on the sale. The 7.3-acre parcel also contains 50,000 square feet of retail space.

It was sold based Starlight Investments in a deal brokered by Lance Coulson, senior vice-president of CBRE National Apartment Group.

“This is one of the largest single multi-family property transactions in B.C. history,” said Coulson.

Beach Properties purchased the complex in May of 2012 for a reported $90 million. Citing confidentially agreements, Coulson could not release the most recent sale price, but two industry sources have estimated it sold for $160 million.

The Lougheed area is seeing big changes coming. The City of Burnaby is readying plans for a $252-million community centre, complete with a pool and expanded library.

The City of Lougheed, owned by Shape properties, also has big plans for the mall, with new towers and a redeveloped shopping centre.

• Westbank and QuadReal have revised plans at the Oakridge redevelopment in Vancouver to include a 100% 52-storey rental building, which, if completed, would be Metro Vancouver’s tallest rental tower.

• Westbank and Crombie Real Estate Investment Trust have revised plans for the Safeway site redevelopment at Broadway and Commercial, increasing the rental units from 160 to 452 units while reducing its strata units

• Marcon, in partnership with QuadReal, have submitted a rezoning application for a 11.6-acre property in Coquitlam Town Centre. A purpose-built rental complex with 126 rental units is included in the first phase.