When completed in 2028, the project will create B.C.’s second-largest shopping mall

The $5 billion, 5,500,000-square-foot, mixed-use project to redevelop Oakridge Centre is the largest development under construction in Metro Vancouver.

It was also on the drawing board the longest before construction started in 2019.

Back in 2019, the two-phase project had a comparatively small first phase. The plan was to build half the project, with half of the retailers allowed to stay open. Those businesses would then shift to the newly built space so vacated space could be torn down to complete the project’s second phase.

The COVID-19 pandemic changed all that.

“Recognizing that we had a hard retail future ahead of us for the next 18 months, at a minimum, we made the decision [in spring 2020] to close the retail down completely and bring on phases of the mall that would have been in Phase 2 into Phase 1.”

Only Crate&Barrel has remained open, and that is because the retailer has ground-level space in the only building on the site that is not part of the redevelopment. 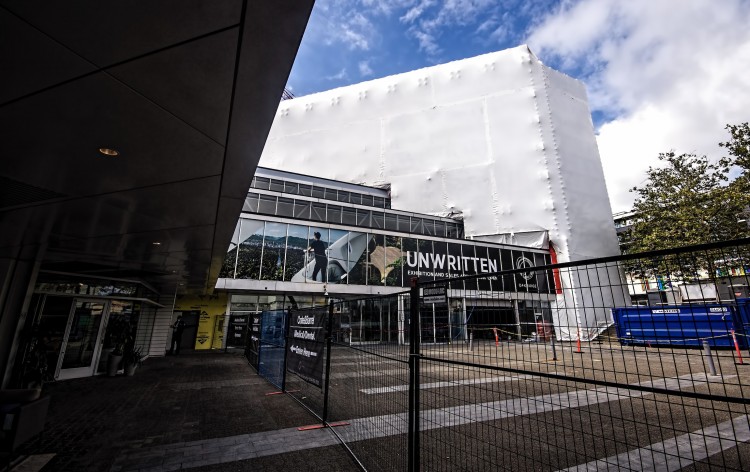 (Image: Security fencing is at Oakridge outside Crate&Barrel | Chung Chow)

Because almost all retailers have vacated the mall, the completion date for the redevelopment’s larger Phase 1 is set to be complete by 2024, instead of 2026. The smaller second phase is not scheduled to be finished until 2028.

When Phase 1 is completed, Oakridge will have about 1.4 million square feet, which would make it the province’s third largest mall, after the 1,573,600-square-foot Metropolis at Metrotown and the 1,500,000-square-foot Park Royal in West Vancouver.

Phase 2 would add approximately 100,000 square feet to Oakridge Centre. That would be enough for it to move into a tie as the province’s second-largest shopping centre.

“The mall creates the podium for the entire development,” Mabberley said.

“Residential towers grow out of that. There’s residential at the bottom of every tower, in the sense that all of the buildings are on top of the mall.”

Helping provide a customer base for retailers in the shopping centre will be approximately 6,000 residents living in 3,500 homes in 14 towers on the site, she added.

A 103,000-square-foot community centre is another amenity to draw visitors.

So is the approximately 450,000 square feet of office space, sufficient to accommodate 4,000 office workers.

When former site owner Ivanhoé Cambridge planned in 2014 to redevelop the mall, its its executives envisaged four levels of underground parking, which, because of an underground aquifer, turned out to be a huge challenge.

After Ivanhoé Cambridge sold the site for an undisclosed amount in early 2017, new owner QuadReal decided that the redevelopment would be viable without a fourth level of underground parking because the site would still have 6,000 parking spots.

To add accessibility, the development team has appealed to TransLink to allow it to build an underground hallway, filled with retailers, which would punch a hole through a wall and lead directly to the underground level of the Oakridge–41st Avenue Canada Line station.

TransLink has yet to approve that plan, but said in an email that it is “optimistic these discussions will lead to an agreement.” 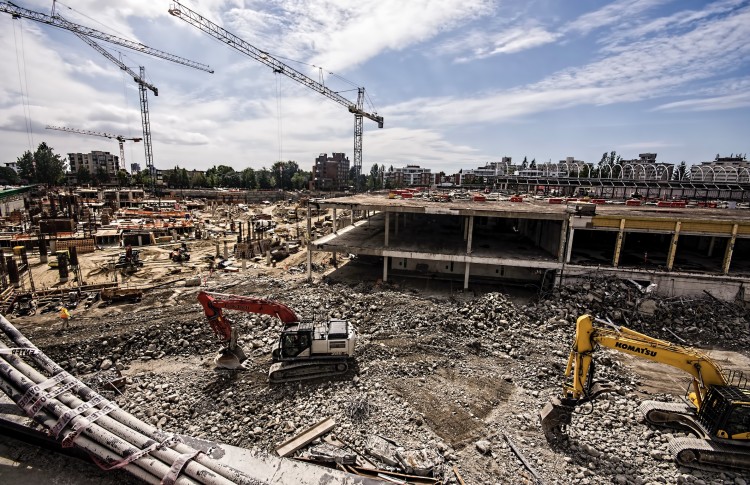 (Image: Most of Oakridge is now a construction site | Chung Chow)

The previous 574,000-square-foot Oakridge had been known for having a large food court, and the plan for the redeveloped Oakridge is to have a 100,000-square-foot food hall with sufficient space for nearly 30 vendors.

Stages for entertainment will be located around the site. A pedestrian-only outdoor high street is set to be another attraction, as is the nine-acre park on the shopping centre’s roof.

Retail consultant, and Retail Insider Media owner, Craig Patterson told BIV that he thinks Metro Vancouverites will flock to the redeveloped OakridgeCentre because it will be a showpiece that attracts luxury tenants, such as Valentino, which may otherwise have located downtown.

Patterson said tenants are increasingly averse to setting up shop in downtown Vancouver largely because of its growing number of homeless people, drug users and visible social problems.

He added that shopping centre owners can ban entry to people who appear intoxicated or who otherwise are thought to potentially cause problems.

While Mabberley said there are no confirmed tenants for the future Oakridge shopping centre, aside from Crate&Barrel, Patterson believes former tenants, such as Apple Inc. (Nasdaq:AAPL) and the Hudson’s Bay Co. (TSX:HBC), will return.

“It’s going to become the most productive shopping centre in Canada, in terms of sales per square foot,” he said.

“Oakridge is going to be a runaway success for retail, and it’s going to be the place to be for quite a while for people – especially when it’s raining.” •