B.C. weathered COVID-19 storm better than its retail counterparts across the country

Retail sales have been roaring back across Canada.

In comparison, British Columbia’s year-over-year retail sales growth in April 2021 was below the national average, increasing 47.6%.

However, that’s largely because, among the country’s four largest provinces, British Columbia’s retail sector was the least affected by the pandemic and therefore did not need as large of a retail sales rebound to return to pre-pandemic levels.

From February to April 2020, retail sales fell 32.8% Canada-wide. Quebec led the way with a 39.6% decline in sales. On the other hand, B.C.’s sales dropped by only 23.3% – five percentage points fewer than Alberta, which had the second-lowest decline. 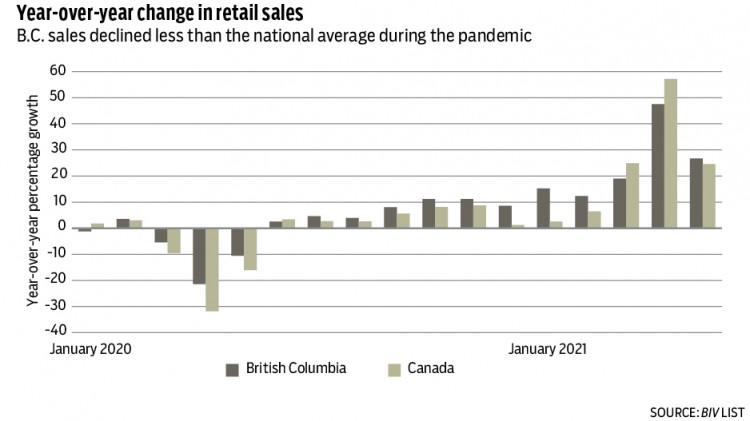 Despite having the slowest annual retail sales growth among the four largest provinces, B.C.’s retail environment is stronger than ever. In 2021’s first five months, B.C.’s retail sales were 14.4% higher than sales in 2019’s first five months. This was almost double the national average of 7.8% and significantly higher than sales in Ontario and Alberta, which grew 1.5% and 8.9%, respectively.

While retail sales are surpassing pre-pandemic levels, they are levelling off, as much of the consumer pent-up demand has been fulfilled.

Across the country, sales have slowed for the past two months. Despite large year-over-year growth, April sales dropped 5.6% from March, and May sales were down an additional 2.1%.

In the same way that B.C. did not suffer as steep a fall or as swift a recovery as other provinces, its retail sales decline in May was only 1.4% compared with April, the lowest month-over-month decrease of the four largest provinces. •