B.C. government data released August 31 back up health officials' assertions that unvaccinated people are driving the province's fourth wave of COVID-19 outbreaks, with older people suffering the most severe consequences once infected.

The 187 COVID-19 patients now in B.C. hospitals is the highest total since June 9. Of those 103 people are in intensive care units (ICUs). Those wards have not been as filled with COVID-19 patients since May 21.

B.C. health officials detected 655 new COVID-19 infections in the past 24 hours, raising the number of those actively battling infections to 6,045. The Interior Health region remains the province's hot spot for new and active cases.

The province's positive-test rate, for 9,281 tests, exceeded 7% for the first time in many weeks.

Data for that finding came from August 20 through 26 for cases, and August 17 though 23 for hospitalizations and deaths. 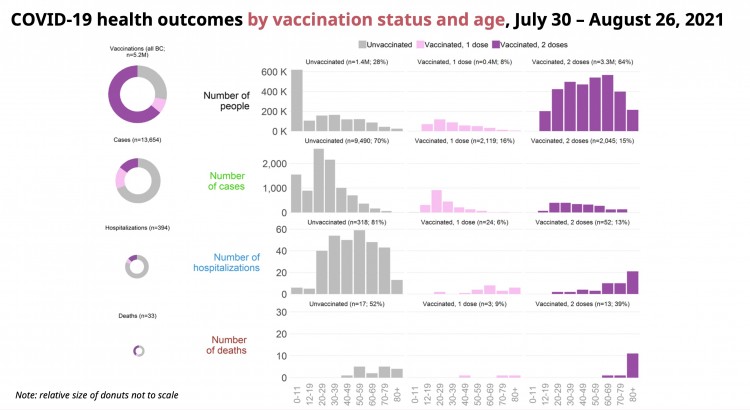 The other key lesson in new government data is that older people continue to be more susceptible to serious bouts of COVID-19, and to die from the illness. The 80-to-90 age group saw 11 deaths between July 30 and August 26. The second highest age group for deaths was for those aged between 70 and 79 years, which had seven deaths.

Among the unvaccinated, there were six people who were younger than 60 years old who died from COVID-19 between July 30 and August 26. Of those, five were in the 50-to-59 age group, and one was in the 40-to-49 age group. This is despite most British Columbians being fully vaccinated during this time frame.

Similar government data showed that new cases and hospitalizations were more likely among those who were unvaccinated. When fully vaccinated people did have serious bouts of COVID-19, it tended to be among older people.

"This tells us that vaccines are working," said provincial health officer Bonnie Henry. "They're preventing thousands of cases and hospitalizations from occurring, because they are protecting people across the age spectrum. They're making a difference." 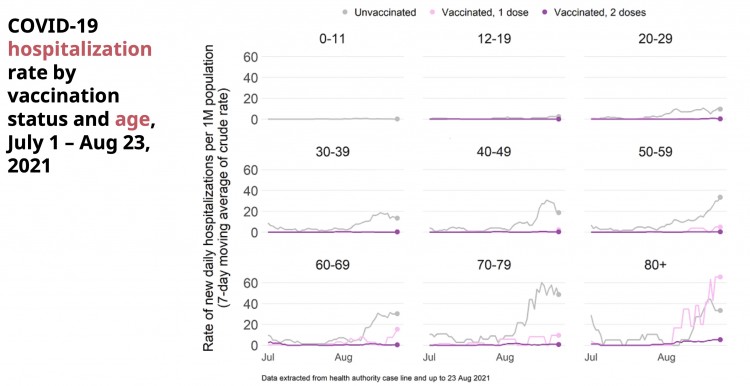 Both Henry and Health Minister Adrian Dix stressed that the rate that COVID-19 is now spreading is much too high.

"We see fewer people in the hospital right now than we did at the height of the third wave, where I think it reached about 503," Dix said. "We're seeing that we're at about a third of that level. It has still put significant pressure on those [hospital systems] regionally."

Despite these heightened calls for people to get vaccinated, vaccinations have declined considerably. Part of the reason is that the vast majority of British Columbians are already fully vaccinated. Another is that large vaccination clinics, such as the one at the Vancouver Convention Centre, have closed. Smaller pop-up vaccination centres are increasingly being used.

In the past 24 hours, health officials provided a total of 10,759 vaccine jabs, with 4,739 going to unvaccinated people, and 6,020 being to people needing second doses. The last time fewer total vaccine jabs were provided to British Columbians in a day was on March 9, when 10,041 of the 10,054 doses provided were to unvaccinated B.C. residents.

The government's math holds that 84.3% of the province's eligible population, aged 12 years and older, has been vaccinated at least once, with 76.5% of eligible people being fully vaccinated.