A Burnaby Asian food app that has been a sensation – growing across Canada and into major U.S. markets like New York and Los Angeles – has added an English version that includes a bazillion new options.

Fantuan has launched an official English app in Ontario and B.C., including Fantuan's HQ region of Burnaby. Fantuan has also welcomed a new diverse group of delivery staff, helping build bridges between cultures.

Fantuan says it grew by nearly 400% last year, and is seeing enormous demand across Canada and the United States.

“Throughout the pandemic, Fantuan has offered lower commissions, higher pay, and more opportunities to people affected by the pandemic (especially at-risk minority groups whose jobs were negatively impacted),” the company said in a statement.

The newest Fantuan feature allows users to have the app’s drivers run errands for them, like delivering flowers.

“Say you have a package that needs to be picked up in Vancouver, but you don’t have time, out drivers will pick it up for you,” the company said.

The main focus, of course, is on delivering food – mostly Chinese food. Fantuan orders are roughly 60-per-cent Chinese food and 40 per cent split between food from other Asian countries, such as Vietnam, Japan and Thailand, as well as fast-food outlets like Subway.

A person orders food from the hundreds of restaurant partners and a driver is notified through the app with a map to the eatery to pick up the food, as well as GPS directions to the customer’s home. Fantuan charges restaurants a lower percentage than other delivery apps.

Fantuan is the brainchild of Randy Wu, who came up with the idea while a student Simon Fraser University.

Wu noticed that life for many foreign students was difficult, especially when it came to feeding themselves. One reason was that many students didn’t know their way around the areas outside of their school’s campus. Another was that few students own a vehicle. 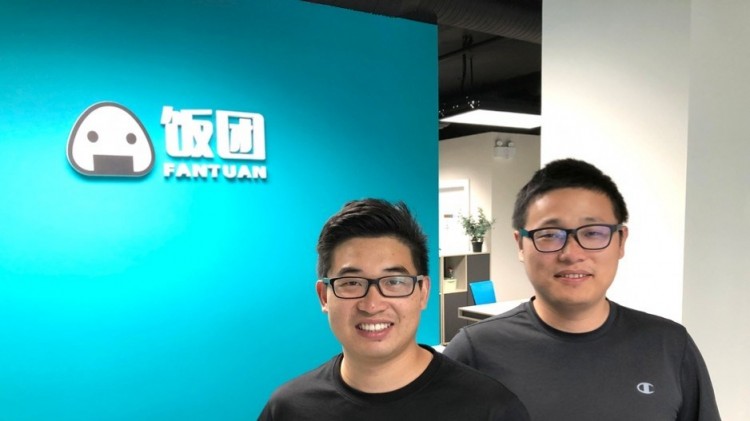 Randy Wu (left) and Feng Yaofei, founders of Fantuan, have based their company out of Burnaby. (via Chris Campbell/Burnaby Now)

So he went about developing a service in which Asian students could order the food they love and have it delivered to their door.

It is called Fantuan (Mandarin for rice ball) and it grew so fast that Wu took that gigantic risk by quitting school in 2014. The risks continued when, for an entire year, he didn’t tell his parents he was no longer a student.

In hindsight, founding the Fantuan app – along with Feng Yaofei – wasn’t really a risk at all because the company has exploded in the past few years.

There is also an English version of the app in the works before the end of the year. Fantuan has also expanded its app from food deliveries to other features, including self-pickup (with discounts), online reviews of the restaurants it delivers for, and online shopping in which users can order grocery items and have them delivered.