Here's why you'll see a bunch of new beers now

Some call them the only truly seasonal beers of the year.

It's fresh hops time in B.C.

For brewers that means trips to farms throughout the reason to get the freshest buds they can and using them right away to capture the unique and short-lived flavours.

"Traditionally hops are dried because so they can be used later in the year," says beer author and BC Ale Trail content manager Joe Wiebe. "Fresh hops, or wet hops, have to be used immediately or they spoil, usually within a day or two."

Hops are one of the four main ingredients of most beers; they bring a variety of flavours and are the stars of beers like IPAs and anything described as "hoppy." They're grown on tall vines and the buds they produce in August and September have been used to flavour and preserve beer for centuries, Wiebe explains.

Once the beers are brewed it's pretty stable, he adds, so cans of fresh hop beer are fine weeks after the brew.

"Fresh hops, because they're fresh, are still largely water. So you're not getting as big of a dose of bitter," says Main St. Brewing head brewer Azlan Graves. "It's a more subtle flavour, sometimes it can be herbal depending on the variety, or juicy."

Graves was up at Myrtle Meadows hops farm near Pemberton this August to pick up a load of fresh Saaz hops for Main St. Brewing fresh hops beer this year, ‘Before The Fall.' It's a hommelbier; Graves describes it as a saison developed in the southwest part of Belgium where hops are grown. It was released just before the Labour Day weekend.

"We're using BC grown Saaz — Saaz is a European noble hop variety, so that was part of the reason for choosing the hommelbier style," he explains. "We're using a traditional European hops to do a more European style ale."

He made sure to go up early in the harvest to get younger hops, noting he prefers the slightly less mature buds for this year's beer. It makes 'Before the Fall' one of the first fresh hops beers of the season, as Saaz already has an earlier harvest date (typically Aug. 19 to 25) than other strains.

Also from B.C., he notes, is the strain of yeast they used. It's a new one developed at Renaissance Yeast Labs at UBC based on European strains. 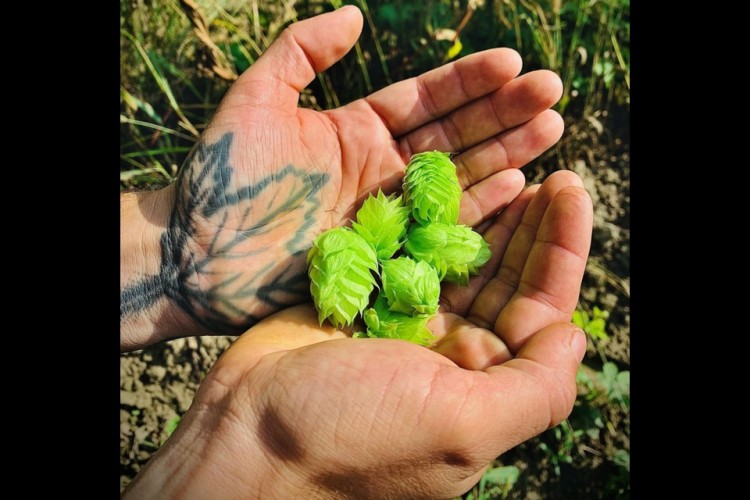 Hops used to be one of the most common crops in B.C., but production fell off.

"Historically hops used to be a major crop in B.C. from the 1920s to the 1970s in the Fraser Valley," says Wiebe. "The profit part of it wasn't as good so farmers switched to other things. It was almost totally gone in the 1980s when the craft beer movement started."

"Lots of little farms have started in the last 10 years."

The first fresh hops beer Wiebe knows of, in B.C., was Sartori Harvest, an IPA from Driftwood Brewery in Victoria. It's become famous now, in B.C. beer circles.

One of those new farms is Myrtle Meadows, though it's one of the largest hops farms in the country. It's run by Eelco de Zwaan and his family; when Graves was up there to pick up some of this year's harvest he toured the property a bit with Eelco and his daughter Noor.

Other farms, Wiebe notes, have started their own breweries as well, using their own fresh hops for their own fresh hops beers. And breweries will go to great lengths to get their hands on the fresh stuff; one brewery based in Prince Rupert (Wheelhouse Brewing) has a history of stopping in Chilliwack on their way home from the Great Canadian Beer Festival in Victoria.

More recently fresh hops beers are booming; Wiebe says each year a dozens of breweries come out with creations.

"We have a fresh hop festival in Victoria, Fresh to Death," he says. "For that event we've been able to put together 30 fresh hop beers on top, and that wasn't all of them."

Graves says there's a few he always looks forward to as well, including Satori Harvest.

"Brassneck always does awesome stuff and as neighbours it's awesome to go over and see. I know they were up at Myrtel Meadows getting hops as well, a couple days after us, so I imagine they have stuff quickly on the way," he says. "Last year Dave over at Russel did a really awesome rice lager with fresh Saaz. I'm always curious to see what he'll be doing."