Could a 500-foot tower be coming to Vancouver’s False Creek South?

By Mike Howell | October 13, 2021, 9:53am
The city released a “conceptual development plan” for the 80 acres of land it owns and manages on the south shore of False Creek | File photo: Dan Toulgoet

The city has released a “conceptual development plan” for 80 acres of land it owns and manages on the south shore of False Creek that contemplates tripling the number of housing units and adding new buildings of six to 28 storeys high.

Taller buildings such as a 500-foot residential tower near the Granville Bridge would be situated at the edges of the property while lower buildings would be built in the middle of the neighbourhood, which runs between the Burrard and Cambie bridges.

An artist’s rendering of potential development shows a build-up of at least seven taller buildings on the west side of the Cambie Bridge, near the Canada Line station. Expanding Charleson Park and other green space is also contemplated in the plan, which goes before council next week.

“It is important to note that these potential heights and densities have not been reviewed by [senior managers] or any other city staff from a regulatory perspective, and thus do not reflect forms of design that have to date been approved or considered to be supportable from a land use planning or regulatory perspective,” said the report, which was posted to the city’s website Tuesday. 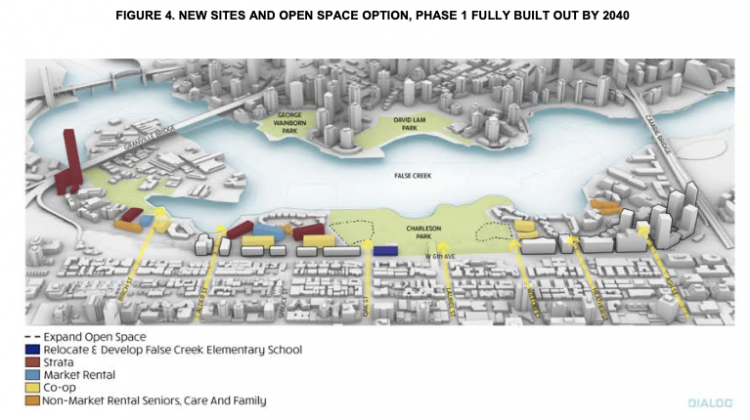 The plan suggests increasing the number of housing units from the current 1,850 to 3,770 over the next 20 years in the first phase and 6,645 by the second phase. The goal is to have a housing tenancy mix of approximately one-third market strata leasehold, one-third market rental and one-third non-market/co-op housing units.

There is also potential to relocate and expand capacity at False Creek elementary school, although that move would require approval from the Vancouver school board.

The report emphasizes the need for funds from senior governments and “partner funding” for new co-op and non-market housing, and potentially for other social and cultural amenities and public infrastructure contemplated in the plan.

“Should this funding not be secured, this would have a material impact on the recommended conceptual development plan, in which case [senior managers] will bring alternative strategy options back to council for consideration,” the report said. 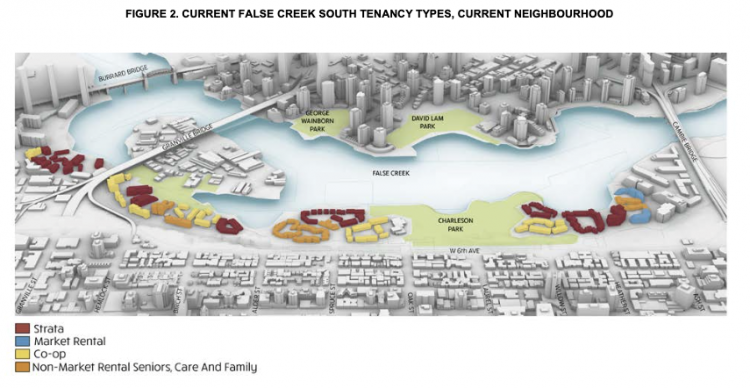 Central to the plan and a concern for existing residents is the need for the city to enter into formal discussions to sort out more than 700 leases. Staff says in the plan that it will begin negotiations regarding strata leasehold and co-op leases in the coming weeks

For leases associated with non-market rental, non-market seniors’ rental and community care facilities, the city expects the leases will terminate at the end of their terms. The buildings will then be transferred to the city and redeveloped as part of phase one of the plan.

Currently, the neighbourhood has six co-ops, four market-rental buildings, six nonprofit buildings and 13 stratas. There are seven forms of tenancy on city land in False Creek South, including a floating co-op of 55 homes.

The area, which was transformed in the 1970s and 1980s from industrial land into primarily a residential neighbourhood, has a population of 5,597 residents — on both city and non-city land.

Median age of residents is 54.3 and median household income is $78,176, with 13 per cent of the population considered low-income.

While there has been new housing built and proposed around False Creek in the past two to three decades, no new housing has been built in the False Creek South neighbourhood since the 1980s.

The city’s future plan also aims to make the neighbourhood more diverse and equitable, with only 17 per cent of its current population represented by visible minorities, whereas Vancouver as a whole is at 52 per cent.

The plan calls for any new developments and utility networks in False Creek South to be designed to withstand future impacts associated with climate change, including increasing heat, rainfall and sea level rise.

Soil remediation is also anticipated prior to development.

“There is significant opportunity for council to use these valuable city lands to advance important public policy objectives, including the potential to create a large number of new affordable homes, address sea level rise, enrich the neighbourhood’s cultural, social and recreational amenities, open up pedestrian, bicycle and vehicle access to this neighbourhood to better connect it with the rest of the city, and, increase the diversity among this  community’s population,” the plan said.

“Consideration of these important policy goals must also take into account the existing residents, businesses and non-profit agencies in the neighbourhood.”