Workers to begin relocating to Sea Island by year’s end

By Tyler Orton | October 20, 2021, 7:14am
General Fusion is set to move its headquarters from Burnaby to property at Vancouver International Airport in Richmond later this year | Maxvis/Getty Images

General Fusion Inc. took a hop across the pond earlier this year to start work on a demonstration plant for its fusion power technology.

The B.C. cleantech firm is now taking a hop across Metro Vancouver for its new headquarters as it plans to quadruple its workforce in the coming years.

Workers are set to begin relocating from Burnaby to Richmond later this year after General Fusion revealed Wednesday it’s signed an agreement with Vancouver International Airport (YVR) to lease a 60,000-square-foot facility on airport property.

The new facility on Sea Island will host the corporate offices, many of its engineering labs and serve as the primary site for development of its fusion technology.

A prototype facility, which is expected to be operational by 2025, was previously announced to be under development at the U.K. Atomic Energy Authority’s Culham campus in southern England.

“We really worked hard to look around. Not only Canada but a bunch of other jurisdictions. But ultimately this was something that was really important to us because this is the thing that's going to fuel our growth,” CEO Christofer Mowry told BIV in June, adding the demonstration plant needed to be in a location close to an established, globally recognized fusion research centre.

“We've got our feet firmly planted in Vancouver … But it's also a story about spreading our wings and being a part of the global energy industry in a big way.”

He revealed back in the spring a new headquarters was needed to offer more space and “a better place to the host the world when they come in and see us.” 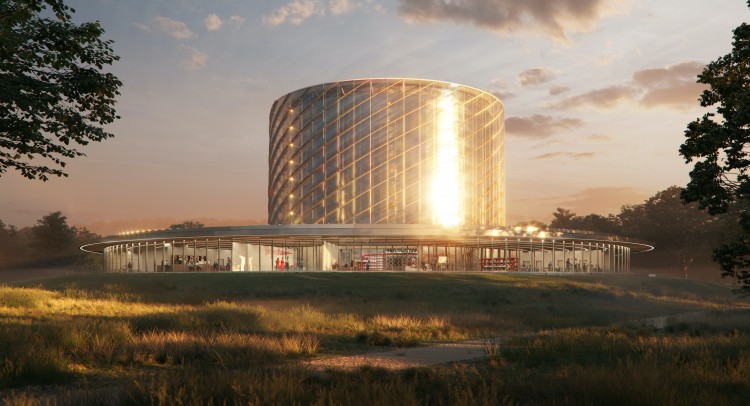 Artist's rendering of General Fusion's demo plant, set to launch in the U.K. in 2025 | Submitted


The company currently employs 140 workers and General Fusion said in a release it would be quadrupling its headcount “over the next few years” as it draws closer to commercializing its fusion technology.

Fusion energy is produced when atoms are fused, kicking out neutrons, which then power a reaction that can generate heat. It is most often associated as a process that occurs in the sun.

Producing a fusion reaction on Earth first requires turning two elements — deuterium and tritium, which are both heavy hydrogen isotopes — into a plasma.

Unlike fission power, which uses highly radioactive uranium and produces long-lived radioactive waste, the radioactive residuals of fusion power would be short-lived, and there is no risk of runaway meltdowns.

The company has raised “significantly above” US$200 million from investors since its founding, according Mowry.