The Audain Foundation, chaired by developer and philanthropist Michael Audain, announced this morning that it is donating $100 million to the Vancouver Art Gallery (VAG) to help finance the attraction's proposed move to a new site.

The gift is the largest single cash gift to an art gallery in Canadian history, according to the VAG.

The VAG has been planning, for more than 13 years, to move to a new site on the southern two-thirds of the block bounded by Cambie, Dunsmuir, Beatty and West Georgia streets – a project that is now estimated to cost $400 million, not including a $50 million endowment fund.

Last year, the project was estimated to be worth $355 million, when a $50 million endowment fund was included in that total.

The Audain Foundation's gift is large enough that it is likely to unlock sufficient provincial and federal government funding to bring the project to fruition. If that happens, shovels could be in the ground as soon as 2022, with the gallery complete by 2026.

BIV asked Audain in 2018 why he, or his foundation, had not committed funds to the VAG's fund-raising initiative, and had instead spent upwards of $30 million to build an art museum in Whistler, and donated $2 million to support expansion at the Art Gallery of Greater Victoria.

The developer, and CEO of Polygon Homes, said this was in part because he did not believe the VAG's proposed expansion would go ahead – a view that has since changed.

"We would like to support an initiative that has a strong chance of being realized, and we’re not interested in making a pledge and sitting there with funds committed for a long time if it is not a strong ability to bring the project off,” Audain said in 2018.

Audain this morning said that he and his wife, Yoshi Karasawa, were inspired to provide the substantial funding because Vancouver is a great art city with an art gallery that is "grossly inadequate in size."

The proposed future art gallery would have more than 80,000 square feet of exhibition space, which is more than double that in the existing gallery.

One difference between 2018 and now is that the VAG has a new CEO: Anthony Kiendl.

BIV asked Audain this morning whether the executive shake-up at VAG helped change his mind about donating the money, and he said, "I can't really comment on that." 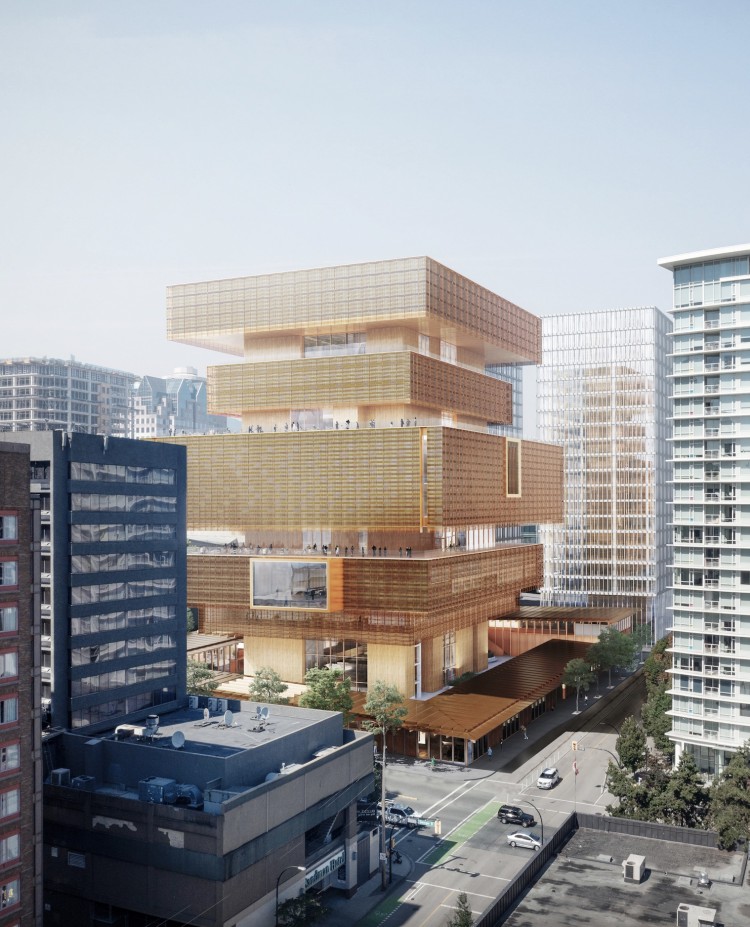 (Image: Here is a rendering of the latest architectural concept for the Vancouver Art Gallery's future home | VAG)

Kiendl said his aim is for his gallery to raise an additional $160 million from public and private sources, meaning that $240 million has been raised so far.

"We hope this historic donation will encourage others in our community, and across the country, to support our vision," Kiendl said.

B.C. Minister of Tourism, Art, Culture, and Sport Melanie Mark was on hand to see Audain announce his gift.

BIV asked Mark if her government would contribute a second gift of $50 million, which the VAG has been seeking. Former B.C. Premier Gordon Campbell kicked off the VAG's fund-raising effort with an initial $50-million gift from the B.C. government in 2008.

Mark did not promise that her government would contribute the needed money, but she sounded positive about the project.

"We need the federal government, and all levels [of government] to get to the table," she said. "We need to paddle together, and make sure that we get this across the finish line."

No federal government representative was at the event.

Infrastructure Canada confirmed in an email to BIV that it has received an application to help fund the new gallery under its Green and Inclusive Buildings program.

"At this time, Infrastructure Canada has not received an application for the project under the ICIP program from the province of B.C.," the email said. 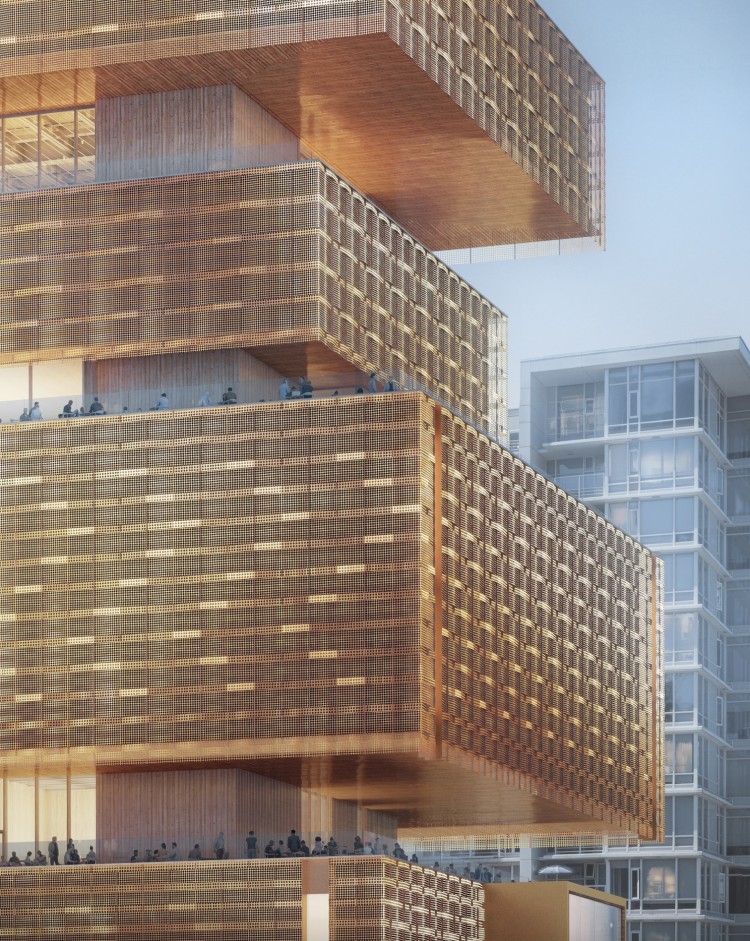 (Image: The new renderings of the future VAG home show a weaved metallic exterior that is likely to include some copper, but would have a copper appearance regardless of what metals are in the alloy, according to architects | VAG)

Mark did say whether funding the new VAG home would be a high infrastructure priority for her government.

"We're here it's an ally," she said. "We're here as an advocate for the arts. We believe strongly – Premier John Horgan, and our government, believes strongly in the arts, and we know that we need institutions like this."

Mark acknowledged that Trudeau, mere weeks ago, appointed a new cabinet, and she said discussions with the federal government are yet to come.

"We're just letting cabinet settle," she said. "We've got our list of things to talk to the federal government about as soon as possible."

Below is a rendering of the old design: 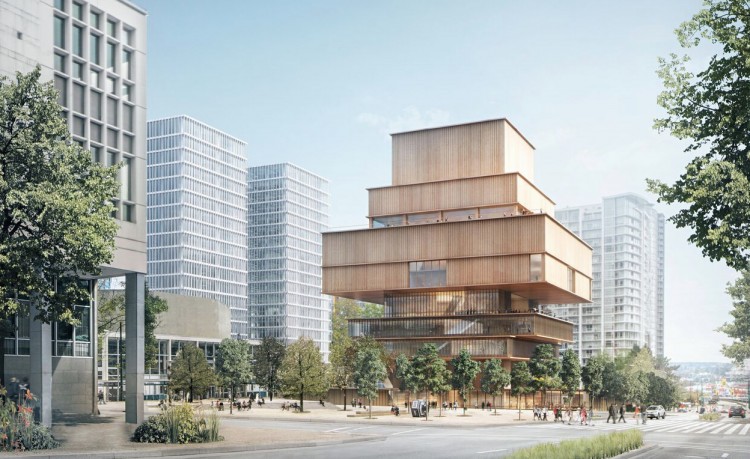 (Image: This rendering of what the future VAG gallery could look like has been around since 2015 | VAG)

If the new art gallery does come to fruition, it will have come after incremental signs of support from governments and individuals through the years.

Vancouver city council, in 2013, agreed to give the VAG a 99-year lease on its desired site, which is known as Larwill Park despite being home to a parking lot. The site was valued at $100 million at the time.

The city’s plan back in 2013 was to keep the northern third of Larwill Park, and find a developer interested in building an office tower on that land. 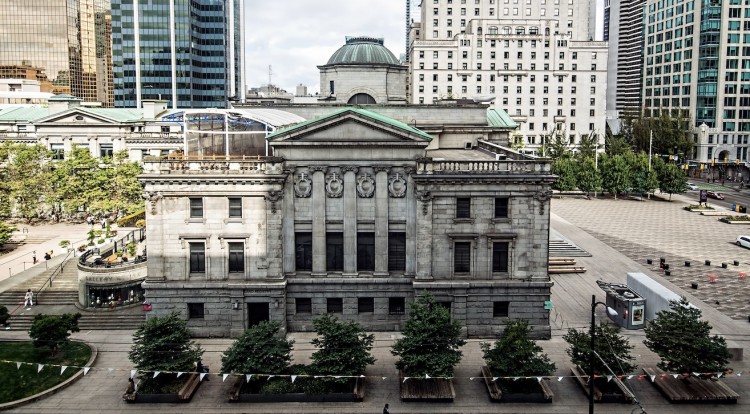 (Image: The Vancouver Art Gallery has for decades been in space that its executives have called too small | Chung Chow)

The B.C. government has told BIV multiple times, starting in 2018, that in order to get more provincial funding for the project, the VAG needed to demonstrate significant private-sector fund raising. This is why the province did not previously prioritize the project for potential federal funding.

That donation was dubbed as the largest private-sector donation in B.C. history to an arts and culture project, and it brought the VAG's private fund raising to build a new gallery to $85 million.

The future VAG is to be both an art centre and a community space – "a revitalized project that embraces change," according to the VAG.

The new site will provide increased space to support artists, and the province’s cultural sector. The project is expected to create an estimated 3,000 construction jobs and 1,000 permanent jobs in the tourism sector.The building is being designed by Swiss architects Herzog & de Meuron together with Vancouver architects Perkins & Will, in consultation with Coast Salish artists. This consultation is reflected in the building’s design and its use of sustainable practices, according to the VAG.

Herzog & de Meuron partner Simon Demeuse was at the VAG today to hear Audain announce his large gift to the gallery. Demeuse said that the biggest changes to the working design for the future gallery include large massing on the top floor, and a new skin to the building that resembles basket weaving or a blanket.

In his presentation, he said that the exterior shell would have "horizontal copper bands," but in an interview after the event he made clear that the exact type of metal used had not been determined but that it would likely include copper as part of the alloy. A coating would be used, if necessary, to keep the material from turning green, he said.

Part of what he likes about the new metallic exterior is that it could look different depending on the light.

The new gallery will be the first in North America deemed a "passive House art gallery," the VAG said. This means that it will use a voluntary standard for energy efficiency, which significantly reduces the building's ecological footprint.

BIV editor-in-chief Kirk Lapointe recently had a discussion with Michael Audain about his life and his new book. To watch that interview, click here.