Willingdon Lands, located at Willingdon and Canada Way, north Burnaby, would be a joint venture with the Musqueam Indian Band, Tsleil-Waututh Nation and Aquilini Development

By Chris Campbell, Burnaby Now | November 23, 2021, 2:01pm
Tsleil-Waututh urban village that, if approved, could provide about 5,000 housing units and include a 450,000-square-foot film studio | Renderings contributed

The Musqueam Indian Band, Tsleil-Waututh Nation and Aquilini Development unveiled a massive master plan November 19 that they have proposed for the redevelopment of the Willingdon Lands in Burnaby.

The plan outlines the creation of a mixed-use, contemporary Musqueam and Tsleil-Waututh urban village that, if approved, would provide approximately 5,000 housing units and include a 450,000-square-foot film studio that could generate more than 3,000 new, long-term jobs to the city.

“Our vision for the Willingdon Lands is to create a contemporary Musqueam and Tsleil-Waututh urban village that provides a cultural experience, is interconnected with nature, and allows us to tell our stories through placemaking and design,” said Musqueam Chief Wayne Sparrow, in a statement. “This is an opportunity for us to continue our legacy as land developers and economic forces within the modern landscape. With this project, we will continue to advance reconciliation and accommodation and create a positive legacy for future generations.” 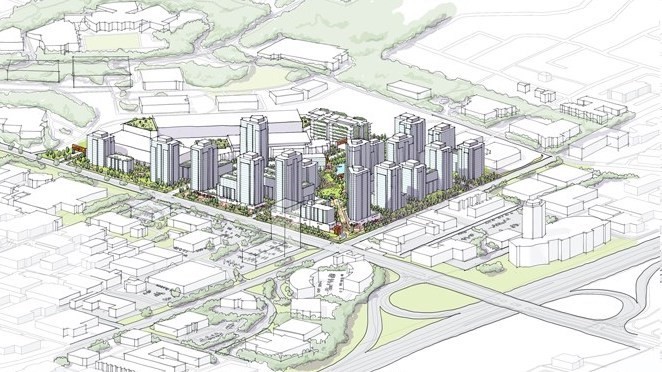 The master plan will be officially presented to the City of Burnaby on November 23, 2021, and will be followed by public consultations | Renderings contributed

According to a news release, the site’s design will incorporate a number of elements inspired by the nations’ history, culture, and connection to the lands and waters such as entry portals, artwork, native plants, a medicine garden, and wayfinding signage in hən̓q̓əmin̓əm̓ and English. There will also be a Musqueam and Tsleil-Waututh cultural centre and an outdoor hearth that “will serve as a gathering place for both the nations and the wider community.”

With approximately 5,000 residential units, the plan outlines a variety of housing tenures, types, sizes, and levels of affordability that will appeal to a broad range of individuals and families. Housing types include leasehold strata, market rental, moderate-income rental, affordable rental and live-work units in a variety of sizes and formats. A child-care centre is also planned for the site.

The master plan will be officially presented to the City of Burnaby’s planning and development committee on November 23, 2021, and will be followed by public consultations, which will culminate in a public hearing anticipated for next spring.

The inclusion of the film studio in the plan relates to Burnaby’s 2020 Economic Development Plan, which specifically identifies the Willingdon Lands as the site for a new media urban village. Plans call for a 450,000-square-foot film studio.

“This project is the first of its kind in Burnaby,” said Ryan Seminoff, president of Aquilini Development, in a statement. “We are very grateful to have been invited by the Musqueam and Tsleil-Waututh nations to be a partner on this important project, which will celebrate Musqueam and Tsleil-Waututh culture in Burnaby and add to the growing portfolio of Indigenous-led development projects.