By Nicholas Johansen/Castanet | November 25, 2021, 2:35pm
Highway 1 near No. 3 Road near Abbotsford Thursday | Photo: Ministry of Transportation

While boats were using the Trans-Canada Highway through Abbotsford just last week, the highway is reopening to motor vehicles Thursday at 2 p.m.

The Trans-Canada Highway that connects Abbotsford and Chilliwack was largely flooded during last week's massive storm, when dozens of home and acres of farmland in Sumas Prairie was flooded.

During Thursday's press conference, Transportation Minister Rob Fleming announced the highway is now dry and debris has been cleared.

There will be no essential travel restrictions on the reopened highway, although Fleming asked motorists to only use the road if needed. Speed limits on the highway will be reduced.

Geotechnical engineers have deemed the highway safe for travel, and Fleming said the road is in surprisingly good condition after spending several days under water. The electrical system is still intact, and the lights lining the road are functional.

Minister of Public Safety Mike Farnworth said a series of three distinct storm cells are forecast to hit the province's coast over the next week, with the strongest coming Tuesday.

“The time to prepare is now, and for people to pay attention and be ready for the unpredictable weather that is coming to B.C.'s coastal areas and the Lower Mainland,” Farnworth said.

Fleming said he expects Highway 1 through the Fraser Valley to remain open through the next week, but the government will keep a close eye on it as the rain falls on the area.

Fleming also announced an estimated timeline for reopening the Coquihalla Highway, saying he's “reasonably optimistic” commercial traffic can return to the major highway by the end of January. But this will be dependent on weather conditions.

“If there's something fortunate about the Coquihalla damage, it's that the areas that experience the most challenging winter conditions were not as impacted and we'll have the same road standard as before the storms,” Fleming said.

“This includes Snowshed Hill, and across the Coquihalla Summit, as well as Larson Hill and the segment from Larson Hill to Merritt.” 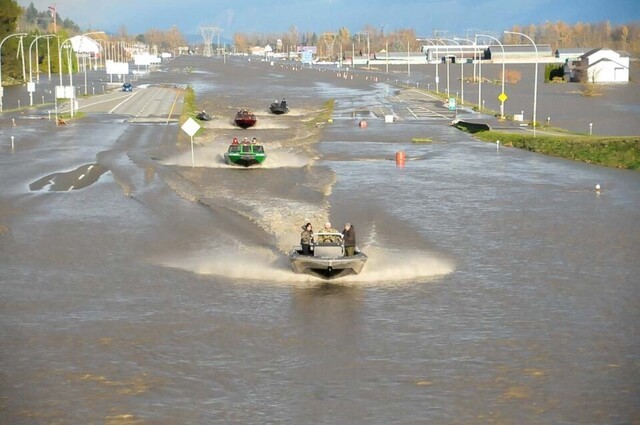 Using more than 100 pieces of heavy equipment, crews are working to repair 20 damaged sections of the Coquihalla. Five bridges were completely destroyed in last week's storm.

Fleming said two debris flows across the highway have been cleared, while crews are blasting rock at three other sites.

He said it's too early to tell when the major route may reopen to passenger-vehicle traffic, but noted Highway 3 will remain a link between the coast and Interior. Currently, Highway 3 is restricted to “essential travellers” only, but it's not clear for how long.

“The priority is really getting goods moving again,” Fleming said. “That restriction [on Highway 3] will remain in place for the time being, but we will update the public as the situation improves on what restrictions may be lifted.”

Highway 99 north of Pemberton also remains a link between the coast and the Interior, for essential travellers in vehicles no larger than a cube van.

The cost of the highway repairs are not clear at this time.

“No idea on costs at this point in time, but we have engineers assessing the extent of the damage,” Fleming said.

“We're throwing all the resources we need to get the Coquihalla ready for the plan that we adopt to repair it to some functionality. I've outlined some of the debris clearance, some of the pre-works, some of the blasting that's being done. We're armouring the sections of the Coquihalla that are intact as well, to get ready or anticipated storm events.”