Unprecedented demand has pushed Metro Vancouver’s industrial real estate vacancy rate to an all-time low of 0.6%, prompting lease rates to soar and manufacturing tenants to choose to locate outside the region.

Some headway in creating future warehouse space came on October 29, when, in a contentious vote, Metro Vancouver's 40 directors, with weighted votes, approved by a 134-82 margin Surrey's request to redesignate South Campbell Heights land for employment purposes.

Executives who have been able to find needed Metro Vancouver industrial space for corporate expansion count themselves fortunate.

“Had it not been for a family contact in commercial real estate, we wouldn’t have been presented an opportunity with Bosa Properties,” said Damon Motors’ co-founder and COO, Dom Kwong.

Kwong’s electric vehicle manufacturing company officially broke ground in October on a new Surrey head office and custom-designed manufacturing facility. It plans to produce as many as 40,000 electric motorcycles annually.

Bosa Properties will own the 110,000-square-foot facility and has entered into a 10-year lease agreement with Damon.

“It felt like years [to find the right space],” Kwong said. “We were lucky.”

Industry insiders consider the region’s low industrial vacancy rate to be an obstacle to economic growth because it costs jobs and reduces the tax base for governments, but no quick fixes appear to be on the horizon.

Municipal efforts to get regional government approval to allow for warehouses on rural land inevitably take time and ignite the age-old debate about whether that land is best kept as farms for food security and environmental sustainability.

Manufacturers committed to staying in B.C. are increasingly eyeing the Fraser Valley as a potential base for Lower Mainland operations – a solution that would require products to spend more time in transit, CBRE senior vice-president Chris MacCauley told BIV.

That raises new sets of problems, because when trucks spend more time on roads, they increase traffic congestion, consumer costs for goods and greenhouse-gas emissions.

“By our calculations, we’ve lost over three million square feet of potential new tenants to Calgary, simply because of availability,” MacCauley said.

“We are the major port, so it would make sense for a lot of these companies if they could set up closer to the port.”

Some companies, he said, truck products from Vancouver ports to Alberta to unpack. They then truck products back to B.C. if that is the intended destination.

“Every quarter, over the last year, we have had a new historic low for our industrial vacancy rate,” MacCauley said. “We also have the lowest vacancy rate in North America out of major industrial markets.”

He suggested that a 4% vacancy rate would be needed to consider the region’s industrial real estate market as being balanced.

CBRE statistics show that the average asking price for leased industrial space in Metro Vancouver jumped 7.2%, to $15.01, in 2021’s second quarter, compared with the previous quarter.

Since the start of 2017, the asking price to lease industrial space in the region has soared 72.9%.

Developers are building as much new space as possible, with more than six million square feet of space under construction, MacCauley said.

The problem, however, is that tenants have already committed to taking almost 80% of that new space, so only about 1.2 million square feet is being added to the region’s vacant inventory. 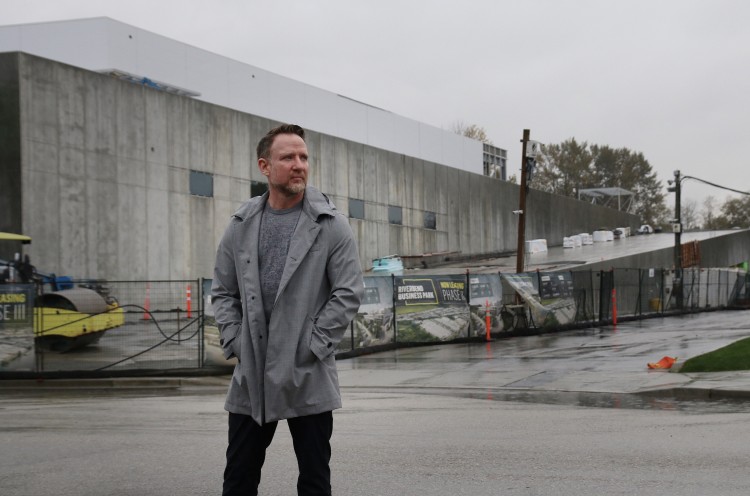 Not everyone believes that the region has a shortage of industrial space.

“It’s not like there’s a great big inventory of obsolete industrial product that we can tear down,” he said.

“All the industrial product that we have out there is occupied. So to simply say that, we can kick a bunch of people out, and rip down their buildings, and then build two-storey structures, that’s just not feasible.”

MacCauley likes the idea of building two-storey warehouses, but said that so far in Metro Vancouver, almost all second-storey space in industrial buildings is used for office purposes.

One exception to that is in south Burnaby, where Oxford Properties is building a two-storey, 700,000-square-foot facility that it describes as the first large-bay, multi-storey industrial property in Canada.

That site is larger than most and will have exterior ramps that enable the building’s second floor to function as true warehouse space – where machinery can move pallets of product to outdoor trucks without needing elevators or otherwise encroaching on first-floor operations.

Because most sites cannot immediately be turned into functional two-storey warehouses, MacCauley likes that Metro Vancouver approved the City of Surrey’s request to redesignate 617 acres of rural land in South Campbell Heights for potential employment use.

The plan is for Surrey to set aside nearly 200 acres of that land to be a conservation area, as well as to expand the Campbell Heights industrial park to the south, where there is prime industrial land that is close to the Pacific Highway U.S. border.

Steves sits on Metro Vancouver’s regional planning committee, and on October 8 unsuccessfully voted against allowing Surrey’s proposal to be heard by the full Metro Vancouver board.

South Campbell Heights, Steves said, should have been included in B.C.’s Agricultural Land Reserve. With Metro Vancouver allowing Surrey to redesignate the land for industrial use, governments and developers may next seek approval to build on neighbouring rural land, leading to ever-expanding urban sprawl, he added.

“Yes, there will be some trees that will be lost,” said Surrey Board of Trade CEO Anita Huberman, who supports redesignating the land for industrial use.

“But we’re also talking about the need for jobs. We have 1,200 people moving into Surrey each month.” •