By Glen Korstrom | November 18, 2021, 8:08am
7-Eleven Canada recently installed QR-code readers at its entrances to enable customers to scan items and pay without interacting with cashiers | Rob Kruyt

Technologically minded Canadian shoppers have long wanted to be able to shop at stores where they can scan smartphones at the entrance, grab items and leave with the purchases automatically billed to their credit cards.

That is the concept behind technology giant Amazon.com Inc.’s (Nasdaq:AMZN) Amazon Go stores, which have yet to open in Canada. Amazon.com executives in Metro Vancouver told BIV that they have not heard of any plans to open such stores in B.C. any time soon, but 7-Eleven Canada may have just launched the next best thing.

The Surrey-based subsidiary of the Dallas, Texas-based convenience-store chain in recent months has installed QR-code readers at the entrances of all 630 Canadian stores, including 236 in B.C.

Customers can pick items off shelves. They then use the 7-Eleven app in their smartphones to scan the products’ bar codes, pay for the products and receive a QR code that they show to QR code readers near store exits.

This means that they do not need to wait in long lines or deal directly with cashier staff. 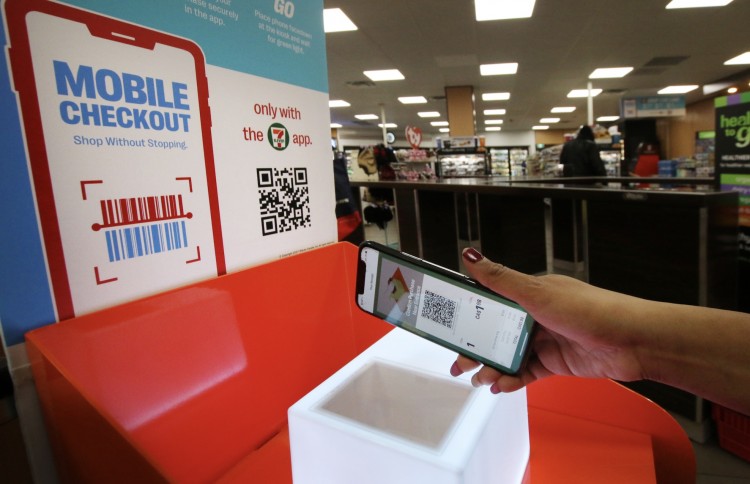 (Image: A customer scans a QR code on a smartphone at the exit of the Davie Street 7-Eleven in order to complete a purchase | Rob Kruyt)

7-Eleven first rolled out QR scanning at its U.S. stores in 2018, and the technology has spread to 3,000 locations south of the border that have logged more than one million transactions, he said.

Those numbers make clear that most 7-Eleven shoppers go to human cashiers to make their purchases, but the technology offers them a choice.

Hower said internal research from those U.S. stores shows no increase in shoplifting as a result of customers being able to self-scan purchases in all areas of the store and then leave without interacting with a human being.

It has become customary for Metro Vancouver grocers to offer self-serve scanners to customers as a checkout option, and they say that the technology has not led to added theft.

“Self-checkout is very good, and there’s little evidence that there’s a great deal of fraud in that,” said Save-On-Foods president Darrell Jones.

Self-checkout machines account for most transactions in some Save-On-Foods stores, he said.

One phenomenon that Jones has noticed is that the average transaction size for self-checkout orders is much less than for those in which customers go to cashiers.

Sobeys has pioneered technology at one store in Toronto, where customers can use shopping carts that have cameras and tablets to self-scan purchases. The shopping cart bottoms double as weigh-scales, so shoppers can place produce into their shopping carts and the correct price is automatically calculated.

Jones told BIV that Save-On-Foods has not adopted that technology in part because he is not convinced that the weigh scales are accurate, and he does not want customers to be incorrectly charged for items.

He added that customers have not been requesting the technology.

Retail analysts say the trend is toward store owners adopting new technologies to make shopping convenient and to streamline transactions.

Retail Insider Media digital content manager Dustin Fuhs told BIV that he has had good experiences shopping at Aisle24 convenience stores in Toronto that do not have any sales staff.

The stores are tiny, at between 300 and 600 square feet, and are located mostly in apartment buildings or on university campuses.

Most customers become members and use Aisle24’s smartphone app to scan a reader that allows them to enter the locations.

Once inside, shoppers can use an app to scan barcodes on items and have the transactions automatically applied to their credit card bills.

Fuhs said cameras ensure that customers do not take items without scanning them.

The small shops are unlike Amazon Go in that customers must manually scan purchases, but they are perhaps the closest thing to Amazon Go stores that currently exist in Canada.

Aisle24 is not yet in B.C., but it is seeking franchisees and has ambitions to operate across Canada. •