Traditional transit networks have been built on the basic assumption most riders would be departing their suburban homes for downtown in the morning and returning in the evening after work.

“That changed quite dramatically in 2020,” said Kristoffer Vik Hansen, CEO of Spare Labs Inc., referring to the immediate impact of the COVID-19 crisis.

His Vancouver-based startup specializes in software that makes it easier for cities and transit agencies to manage transportation networks.

“Fewer people are generally commuting [and] there’s a large percentage of the population that is now working from home, either permanently or in some kind of flexible work environment,” Vik Hansen told BIV.

“Our customers, they really realized that they couldn't just have fixed routes as their only service because, while it can transport a lot of people, at the same time it's not very dynamic. It can't easily change based what's happening in real life.”

And as the pandemic reshapes transit systems, demand for Spare Labs’ technology has been surging this past year-plus with Vik Hansen telling BIV the company has tripled its customers and doubled its headcount, which now stands at 50 workers.

Changing transit trends are also drawing major interest from investors, with Spare Labs revealing Tuesday the close of an $18-million Series A funding round. The funding round was led by Montreal’s Inovia Capital with participation from Kensington Capital in Toronto and Vancouver’s Nicola Wealth, among others.

Spare Labs’ transportation-as-a-service (TaaS) platform allows commuters to punch in their location and find various travel options to get to their final destination. In some cities, buses may even be rerouted in real time depending on demand instead of travelling along fixed routes on fixed schedules.

Vik Hansen said the “heavily oversubscribed” funding round came together in record time and the new capital will allow Spare Labs to ramp up development of its technology, and either double or triple its workforce within the next 12 months or so.

“Our ultimate goal is really to lower the cost of providing transportation services,” he said.

“If we can lower the cost of our customers to provide a trip to their passengers, that means that they can serve more passengers and provide even better services.” 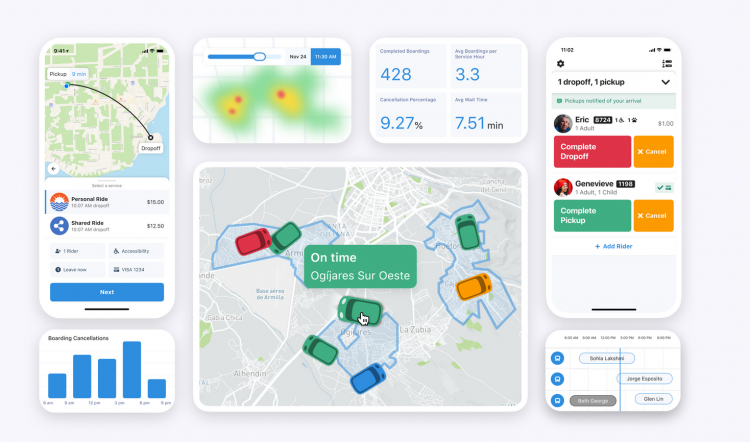 One of Spare Labs' platforms for managing transportation networks | Submitted
​​​​

Among the more than 50 cities in which Spare’s made-in-B.C. tech is being used, Dallas Area Rapid Transit plans in the coming weeks to at least double the number of microtransit zones Spare helps to manage. Microtransit zones represent the gap between a starting point or end destination (such as a home or workplace), and a major transit hub (a SkyTrain station or bus loop, for example).

In the case of Dallas, the doubling of microtransit zones means greatly reducing the number of fixed-route buses and replacing them with on-demand options that Spare’s platform can help facilitate for passengers.

While Spare Labs has been primarily focused on customers in the public sector, Vik Hansen said there has been increasing interest from the private sector as well.

“That could be anything from taxi companies, to airport shuttles to even independent ride-hailing companies,” he said.

One such private sector customer is Green Coast Ventures Inc., a Tofino-based company operating under the name Whistle. Aside from the Vancouver Island resort community, the local ride-hailing service also operates in Whistler.

“One of the big reasons that we raised the amount of [Series A] capital was that our fundamental belief is that we're going to see more and more independent mobility providers going forward.”