Despite pressure to allow non-essential travel, restrictions not being lifted on Highway 3

By Cindy White, Castanet | December 6, 2021, 2:11pm
An excavator passes riprap down to the other on a lower bench, building an erosion control embankment, along Highway 3 | Photo: B.C. Ministry of Transportation and Infrastructure / Flickr

The question was asked multiple times during Monday’s update on the impacts of flooding in B.C., and each time, Transportation and Infrastructure Minister Rob Fleming had the same answer.

Non-essential travel on Highway 3, between the Lower Mainland and the Interior, is not permitted until further notice.

Fleming was asked if essential travel rules could be broadened to allow family members to visit each other, or for people to travel to work.

“Highway 3 is designated now for commercial trucks. We need that vital link to the supply chain. The focus is on making it as safe as possible,” reiterated Fleming.

“We’re working with the trucking industry, for example, to get to a zero-accident point and working with the industry closely on making that safe. We’ve got winter conditions... enhance the maintenance on Highway 3. But in terms of opening up the restrictions that are in place to general travel, we can’t do that at this point in time.”

He said there is no timeline as to when the restrictions could lift. There have been multiple fatalities on Highway 3 since it reopened.

He did not answer whether those hoping to travel during the holiday should plan to book a flight instead of driving to the Interior or further into Alberta, but did point out there are ways to get through by travelling into the U.S.

The issue of alleged airline price-gouging also came up.

“As you know it is a federally regulated industry. The challenge, of course, is twofold. One, it is the holiday season and prices are typically higher at this time of year. But also, we want to make sure, that as much as possible, airlines have the capacity and ability to deal with the demand in a way that does not result in people having to pay exorbitant fares,” explained Farnworth.

“We’re working with the transportation sector, including the airline industry, to look at additional flights from Abbotsford airport, Vancouver airport, Victoria to destinations in the interior of the province... Kelowna, Kamloops, and there’s lots of regular connections to places like Calgary,” said Fleming.

“The airline industry is obviously interested in seeing what kind of additional regional and holiday service they can provide, so we’ll keep on updating what the industry is doing in terms of adding flights that may be able to help people with their holiday plans.”

Fleming did have a bit of good news for people in the Lower Mainland.

Highway 7 will be reopening to general travel later this afternoon. As well, a portion of Highway 11 is now open to single-lane traffic between Abbotsford and Mission, reconnecting the whole length of the route to the U.S. border.

Farnworth announced during the Monday news conference that starting today, most members of the Canadian Armed Forces, who had been deployed to help during the flood emergency will begin transitioning back to regular duties. However, a contingent of about 126 will remain stationed in Chilliwack to continue to support any life-safety work or emergency response needs. 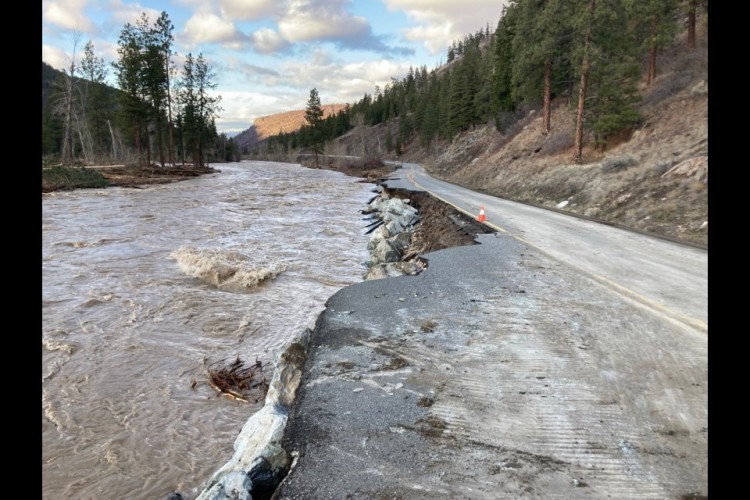 Work is underway to deposit riprap along the highway between Merritt and Spences Bridge, in an effort to protect the highway from further erosion | Photo: B.C. Ministry of Transportation and Infrastructure / Flickr

Farnworth also revealed that starting Dec. 15, flood evacuee support will shift from being managed by local governments to being supported through the Canadian Red Cross with funding from the province.

“While the back-end management of this evacuee support is shifting, nothing will change in the level or types of support received,” said Farnworth.

“The Red Cross has the required capacity and experience. The transition should be seamless and I want to thank them for ongoing work and support since this event began.”

Now that the floodwaters have receded, efforts are shifting to recovery and debris management. The work will be managed by contractors, non-governmental organizations and a specialized contingent of BC Wildfire crews.

Farnworth will be touring the flood damage in Merritt on Tuesday and was asked what he has to say to those whose homes are destroyed.

“We have been ensuring that Emergency Support Services are there in place. We put in place the $2,000 to assist individuals. We will be working with the local community in terms of repairing the infrastructure that has been damaged and working to ensure that we build that community back stronger and better to be better prepared for the future,” he said.

With the Trans Mountain pipeline back in operation, there were questions about whether limits on gasoline purchases in the Lower Mainland and Vancouver Island will be lifted early, but Farnworth said the order remains in place until Dec. 14.

He noted it will take time for the pipeline to be brought fully back up to capacity.