Companies deploying everything from broadcast devices to designer clothing at Games

By Tyler Orton | January 27, 2022
Victoria-based MXZN Technlogy is deploying its broadcast interview devices in Beijing for the 2022 Olympic and Paralympic Winter Games | Submitted

There will be a notable absence of Vancouver Canucks players hitting the ice next month in Beijing to compete for gold after the National Hockey League and its players association pulled out of the Olympic Games in late December.

Instead, other big-time B.C. brands, ranging from technology to tony threads, will be taking centre stage at the Olympic and Paralympic Games in the coming weeks.

Despite controversy hovering over China’s human rights record, a diplomatic boycott of the Games by Canada and other allies, and the iciest relationship on record between Ottawa and Beijing, the Games have the potential to boost the profile of West Coast companies, according to one expert.

“Looking at it from a visibility standpoint, to be able to … get our devices being used by national organizations, national broadcasters at the biggest international sporting events in the world – not a bad place to launch your project,” said Keith Wells, CEO of MXZN Technology Inc.

His Victoria-based tech company is best known for developing broadcast interview kiosks allowing athletes to offer their thoughts in front of shoulder-width stations that can be adjusted to stand slightly taller than the average person.

Professional lighting, 4K cameras, a 5G-capable iPad and a mic pointed directly at interviewees are meant to create a mini-studio within the confines of venues. Among the target markets are countries that can’t afford to send broadcast teams to big international events such as the Games.

After testing six of MXZN’s devices in Tokyo last summer, three of the devices are being handed over to the Canadian Olympic Committee during the February 4-20 Winter Games.

And Wells, who will be in China to mind the devices for the March 4-13 Paralympic Games, said an “enthusiastic” CBC will also be using MXZN’s hardware to help record interviews with athletes.

Seven devices will be spread out between Beijing and the mountain venues serving as home base to alpine and other events, which will allow for athletes to conduct interviews even if a Canadian journalist is not available to meet them amid restrictions imposed by the Chinese government to avoid the spread of COVID-19.

“It still remains to be seen what the experience will be like being there,” said Wells. 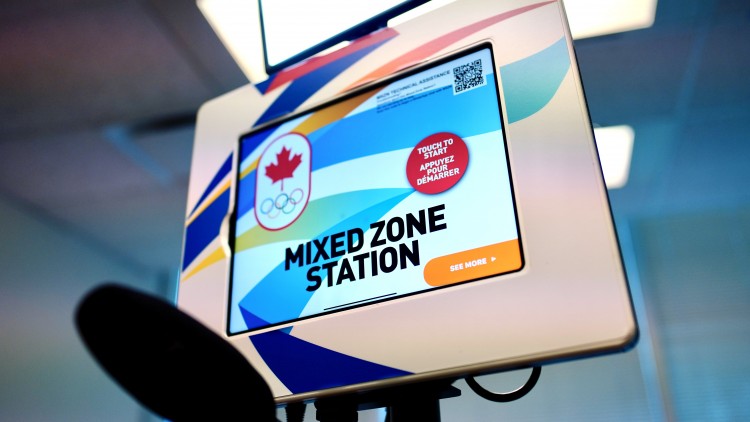 
Even in Japan, Wells found himself having to sign out of a hotel room as a guard stood by watching when he wasn’t on the job if he wanted to go for a 15-minute daily walk.

Meanwhile, Lululemon Athletica Inc. (Nasdaqa:LULU) has replaced Hudson’s Bay Co. (HBC) as Team Canada’s official outfitter for the 2022 Games and after to 2028.

The jean jackets HBC offered in Tokyo last summer are giving way to bold red parkas and quilted trapper hats that are among an array of garments the Vancouver-based athleisure giant designed for the Beijing Winter Games.

“Lululemon’s Olympic move is part of an effort to expand brand awareness in a big way and in a way that has a level of prestige that is hard to beat,” Craig Patterson, retail consultant and Retail Insider Media Ltd. owner, told BIV.

“It is considered highly prestigious to design the collection, and HBC and Roots [Corp.] have seen image boosts in years past. Ultimately, it’s questionable if the Olympic endeavour will be profitable, and it might not even matter as it’s more of an opportunity for bragging rights for the brand.”

Lululemon spokeswoman Maryann Nasello declined to respond to BIV’s inquiries on behalf of the company, referring the newspaper to a link to the Canadian Olympic Committee’s website.

The Canadian Olympic Committee did not respond to multiple inquiries from BIV.

The miner provided recycled metals that were used in the medals for Vancouver’s 2010 Winter Games.

Teck will not have a commercial presence in Beijing but spokesman Chris Stanell said the company will be supporting the Team Canada ring program, which presents commemorative rings to athletes competing at the Olympic Games and Paralympic Games.

Teck's lack of physical presence will be the norm for most B.C. brands.

"Nobody will have kiosks/commercial or public-facing setups in the Games footprint on the ground in Beijing," Canadian Paralympic Committee spokeswoman Nicole Watts said in an email.