Could artificial intelligence help people survive one of the world's deadliest diseases?

Sepsis is responsible for one in five deaths worldwide, and is likely an underlying cause of COVID-19 deaths. Now a Vancouver immunologist says he's found a key solution using artificial intelligence

By Stefan Labbé | January 24, 2022, 10:34am
Neeta Long recovers from sepsis in a hospital bed at Royal Columbian Hospital in New Westminster. In 2018, a bacterial infection sent her into septic shock, later forcing doctors to amputate her hand and feet a few inches below the knees | Photo: Submitted by Neeta Long

In the early hours of January 15, 2018, Neeta Long woke with what felt like a bad case of the flu — so bad, her husband, Phil, rushed her to the emergency room at B.C.'s Royal Columbian Hospital.

She had been racked by fever all week when the vomiting started. When she got to the hospital, everything went black.

“The last thing I remember is registering in the ER and walking through the doors,” said Long, who was initially given Gravol and told to return to her Coquitlam, B.C., home.

By early afternoon, Long’s condition had rapidly deteriorated. She showed signs of respiratory distress, had difficulty breathing and her kidneys started failing. Her husband recalls veins branching from her neck up to her face in a series of blue tendrils.

Then the test results came back from the lab: Long’s white blood cell count was through the roof and she tested positive for streptococcus A, an invasive bacteria that can lead to serious illness, especially among children and those with compromised immune systems.

Long was rushed to a trauma bay. An intensive care unit team inserted a flexible plastic tube down her throat to mechanically ventilate her lungs. All she remembers are flashes of ICU doctors and nurses, their grim faces looking down at her.

Neeta Long was in septic shock and on the cusp of death.

Sepsis, known colloquially as blood poisoning, is an often misdiagnosed condition because it mimics other illnesses.

It begins with infection.

Under normal conditions, an invading bacteria, virus or toxin will trigger an inflammatory response in the human body. Damaged cells release chemicals that cause swelling in an effort to isolate the intruders in an infected limb or organ. At the same time, those chemicals act as marching orders, attracting white blood cells to consume any germs threatening the body.

But during sepsis, a persistent and often neglected infection can prompt the immune system to go into overdrive. Swelling that may first have been limited to a single arm or lung spreads across the body.

As the infection spreads through veins and arteries, blood pressure drops. The reduced blood flow raises the risk of blood clots.

After a few days, the over 37 trillion cells in the human body can forget how to respond to infection in what experts describe as “cellular amnesia.”

For many, death comes fast. One after another, choked-off organs — the liver, heart and brain — shut down in a cascading and catastrophic failure. 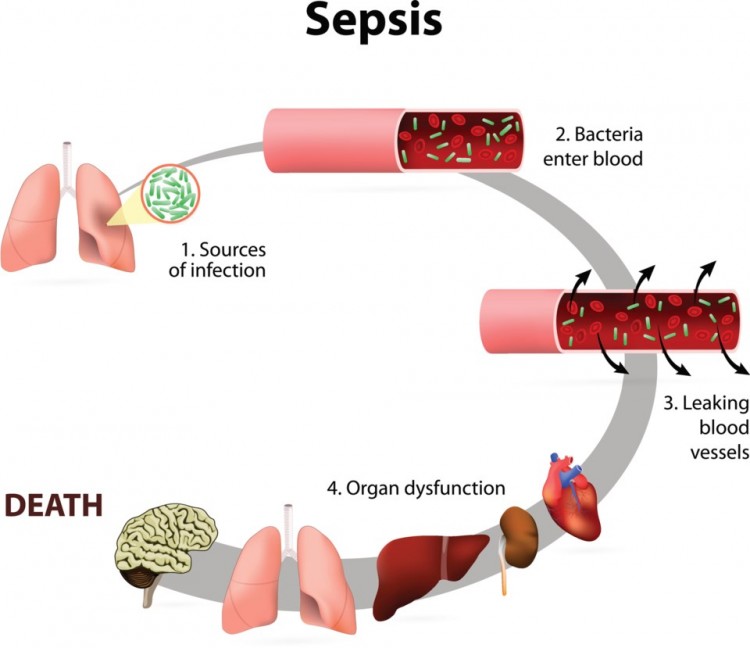 Sepsis begins with an infection—the presence of numerous bacteria in the blood, which causes choked-off organs to eventually shut down | Photo: ttsz/Getty Images

Statistics Canada estimates 38% of patients that make it to this severe stage die. Every year, sepsis claims the lives of more than 10,000 Canadians, representing more than half of all deaths related to infectious diseases. And because of the difficulty in diagnosing the disease, that number is likely much higher.

Globally, the numbers are even more startling. In 2017, the World Health Organization estimates there were nearly 50 million cases and 11 million sepsis-related deaths worldwide. That means one in every five deaths — no matter what the cause — can be traced back to sepsis.

“As we got to 2020, we started to realize that when people died of COVID-19 severe disease, they died from sepsis. And so it's probably an even greater cause of death worldwide,” said John Hancock, an immunologist at the University of British Columbia.

As one of the world’s leading sepsis researchers, Hancock has spent years looking to solve the intractable problem of diagnosing the syndrome.

What makes sepsis so insidious is that patients come to the hospital presenting a huge range of symptoms that are often hard to recognize. So physicians are forced to use their judgment.

When Long first spoke to Glacier Media in 2020, she said doctors failed to realize her case would turn so serious. But soon after she was admitted to hospital, her organs began to fail. She was put on dialysis and the doctors pumped her full of broad-spectrum antibiotics and a drug called Levophed to boost her blood pressure, which had gotten so low that it triggered three or four minor heart attacks.

As the drug drew Long’s blood back to her organs, her feet, hands and fingers turned black. Eventually, she would spend 10 days in an induced coma before her vascular surgeon looked at her “mummified” extremities and decided to amputate one hand and both feet below the knee. Her right hand was so damaged she has taken to calling it a “lobster claw.” 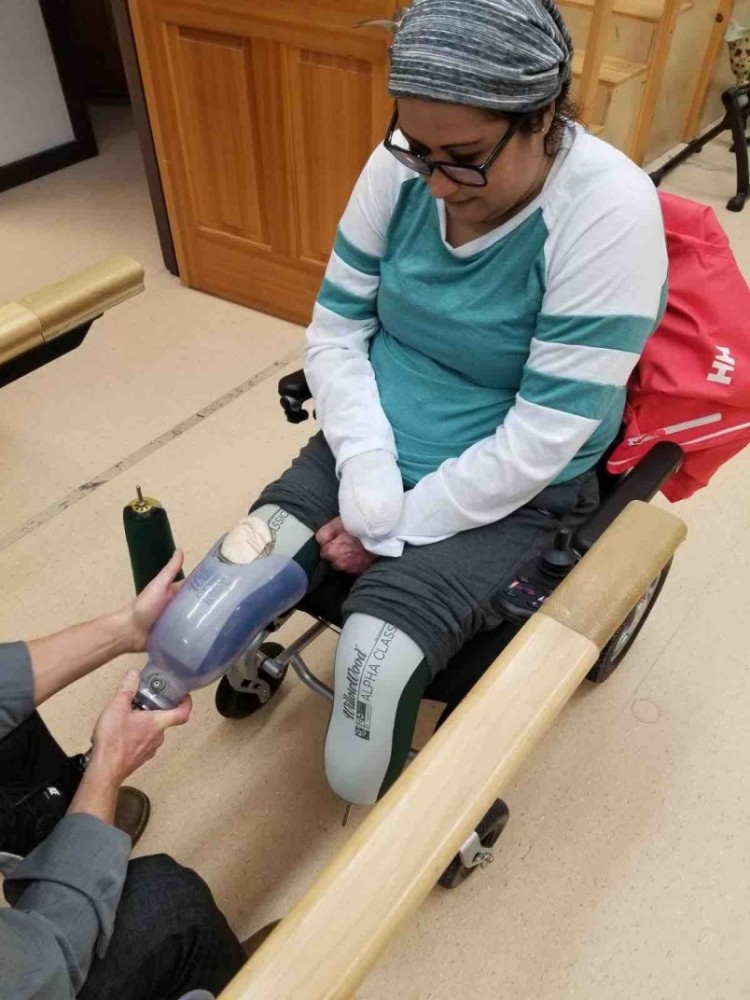 There is no evidence Long or anyone else is genetically predisposed to sepsis, says Hancock. What counts is the strength of a person's immune system and age — the extremely young and old are more likely to fall ill, though any age group can develop a spiralling hyper-immune response.

Hancock says the secret to dealing with sepsis is to spot it quickly then start early and aggressive therapy — such as administrating antibiotics in the case of Long's bacterial infection.

But existing diagnostic tools that are meant to flag the onset of sequential organ failure have been shown to work only half the time, says Hancock.

“It’s this whole set of nonspecific symptoms that look like other diseases — that means physicians can't really discriminate in any accurate way,” he said.

In bacterial infections, antibiotic resistance is a growing problem, but so are viral infections for which we have few or no treatments.

And while sepsis is not usually recorded as the cause of death among COVID-19 patients, there is evidence that it’s often the underlying reason they die.

“As far as anybody can work out — certainly as far as we can work out — COVID-19 basically, when it kills people, they die from sepsis,” said Hancock.

After years of looking for a way to spot sepsis, Hancock says he has finally developed a kind of early warning system that could revolutionize patients' chances of survival.

Hancock’s latest discovery began as he was looking to confirm some unremarkable data from other studies.

But as the number of patients in his study exploded, Hancock said the possibilities of what could be revealed about sepsis grew.

His team eventually got their hands on blood samples from 348 sepsis patients from across four different continents. Now they had the raw data of thousands of genes. The problem was how to spot the behaviour of a single pair of genes that dictate how the body’s immune system responds to sepsis.

Whereas in the past, sorting through all that data would have been next to impossible, today machine learning is supercharging the kind of insights researchers can draw from big data. In Hancock's landmark study, his team turned to artificial intelligence to filter the huge amount of data and detect genetic red flags to spot severe sepsis before it’s too late.

Patterns started to emerge. Doctors often treat sepsis as a single syndrome with a broad spectrum of symptoms. But what Hancock and his team discovered was that sepsis could be split up into five types of illness, each one with its own dominant symptoms and a single pair of gene biomarkers.

The team found their gene fingerprinting technique was 97% accurate in determining which subtype of sepsis a patient suffered from.

The work, published this month in The Lancet, has allowed Hancock and his team to develop two diagnostic tests, one which can predict the severity of disease and another that spots the type of sepsis a patient has.

“Basically, we would be able to tell the physician that there is an 80% chance that this patient is going to develop severe sepsis and organ failure,” said Hancock of the severity test.

Finding out which subtype of sepsis a patient has would then allow doctors to devise a specific treatment.

That would be especially important in the case of two particularly deadly sepsis subtypes: one dominated by inflammation, which could require anti-inflammatory medicines early on; another, which suppresses the immune system and leads to a 47-per-cent mortality rate in ICU patients, would require an artificial boost to the immune system so the body could defend itself.

The diagnostic screening would require a patient’s blood sample and a simple polymerase chain reaction (P.C.R.) test to spot the biomarkers — procedures and technology that are already used in hospitals.

Once that information comes back, doctors would be able to triage the most urgent cases for treatment.

The technique is not foolproof. Hancock says one of the biggest barriers comes from physicians who are used to doing things in a certain way.

A global push to raise awareness around sepsis has led to some success — death rates in some Western countries have dropped to 23% from 35 over the past decades.

But that progress has stalled, and Hancock says if his lab’s technology and techniques are adopted, they will need the backing of bigger names in health care. The team is looking to present the diagnostic tests for approval with Canada’s Health Protection Branch and the U.S. Federal Drug Administration later this year.

Even if the tests are adopted, doctors still don’t have all the therapies to treat every type of sepsis, and Hancock says more work needs to be done to develop specific treatments.

Long would eventually survive gruelling hospital stays and her ongoing recovery means learning to walk again with new prosthetic legs. Along the way, she has connected with sepsis survivors since nearly succumbing to the syndrome herself.

“They all have the same kind of story,” she recently told Glacier Media. “They never knew what it was."

Should hospitals adopt the diagnostic tests, Hancock says it will help patients like Long immediately, as well as many of the thousands more who don’t survive.

The tests could also offer a window into who is most at risk of dying from COVID-19 as soon as they arrive in hospital. In a study Hancock said his group has yet to publish, they found the most severe hospitalized cases of COVID-19 all show the signs of sepsis.

“Essentially any individual who ends up on a respirator with COVID-19 — so mechanical ventilation — almost certainly has sepsis,” he said.

And while every patient that enters hospital is ostensibly tested for COVID-19, they are not screened for sepsis.

Find out early who is at highest risk of dying from sepsis, goes the thinking, and doctors will have a better handle on how to triage COVID patients.

“That's what has to happen next,” Hancock said.