By Glen Korstrom | February 15, 2022, 8:08am
John Boychuk’s Davie Village Tanning salon has been vandalized four times in the past 14 months | Chung Chow

The business’ co-owner, who has operated the venture in Vancouver’s Davie Village for more than 25 years, told BIV that he has had more trouble with vandals in the past year than he has had in the previous 24 years combined.

Insurance companies will not provide coverage because they see his business as too big of a risk, Boychuk said.

“We have zero insurance now for the merchandise stolen, and for the $1,400 cost to replace the window,” he said.

It is not just property crime that is rampant in the downtown core. Police say that in recent weeks residents have reported an average of more than four random assaults per day. 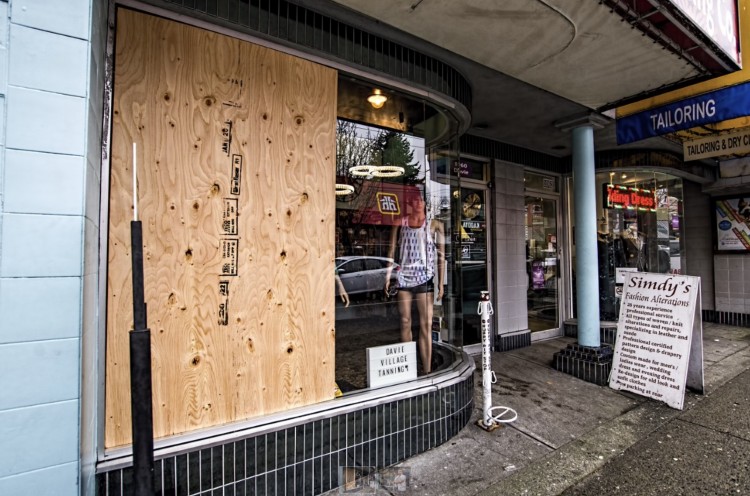 (Image: One of Davie Village Tanning salon's windows was boarded up in early February | Chung Chow)

Boychuk is not alone in suffering an onslaught of vandalism or smash-and-grab crimes, where thieves break windows and steal merchandise.

Three doors east, at Subway, someone recently threw a chair to break a window. Another two doors east, at Marquis Wine Cellars, owner John Clerides has launched a crusade against property crime that includes the Facebook group Vancouver Break-ins & Crime Collective, where Clerides encourages members to post photos of damage.

Vandals have smashed multiple windows at Clerides’ wine store, and, on one occasion, smash-and-grab thieves stole an electric scooter that his employees used to deliver products. 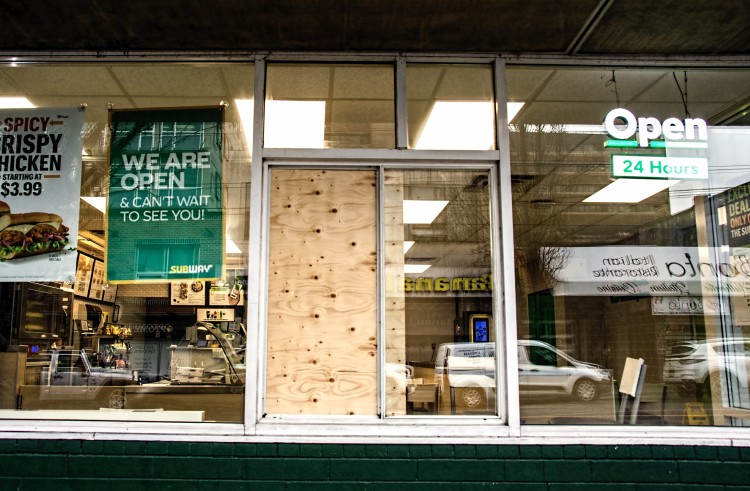 He wants Vancouver Mayor Kennedy Stewart and the rest of city council to clearly show that they understand how bad the problem is in the city, and that they are working to fix it.

He also wants designated city staff to patrol the streets so they can see where vandalism is happening.

The City of Vancouver told BIV that it contracts Goodbye Graffiti to do those patrols, and that the contractor selects parts of the city to patrol and then paints over any graffiti tags that it discovers. Various downtown Vancouver business improvement associations report vandalism incidents to the Vancouver Police Department (VPD,) and graffiti tags to city hall, the city said.

The Downtown Vancouver Business Improvement Association’s (DVBIA) budget comes largely from levies on commercial properties in its catchment area, and it spends part of that to pay two community outreach workers and its 11 “downtown ambassadors,” who also patrol the streets and record vandalism.

“Depending upon the type of vandalism, [the ambassadors] might be able to intervene,” DVBIA CEO Nolan Marshall said.

Private business owners are responsible for damage to their properties, and the city works with those owners to ensure the damage is fixed within a reasonable time period, the city said.

“I sympathize,” Stewart told media at a January press conference. “There’s nothing worse than being a victim of crime. It’s happened to me and my family. So, I do know that it is a very traumatic thing for people to go through.”

The mayor, however, added that Vancouver is “one of the safest cities in the world.”

Stewart and city council supported a recent increase in the VPD budget: to $341.5 million this year from $316 million last year.

She said that it is important to increase support for mental health services and affordable housing while also providing more money for policing.

“It’s not an either-or situation; it’s an ‘and’ – we need both,” she said. “You can’t just stop having your police department tomorrow and hope for a kinder, gentler world. They will be needed.”

Kirby-Yung supports Clerides’ suggestion that the city sue known vandals who fail to be charged with crimes because the Crown decides either that there is insufficient evidence for a conviction or that a charge is not in the public interest.

Those are the two criteria the Crown uses to decide whether to pursue charges.

Nanaimo successfully sued a vandal last year and won a settlement worth $10,000 in fines and $5,475 in damages.

Graffiti tagger KHAOS was ordered to pay that money in instalments of $150 per month, starting last September.

“I am in favour of exploring a number of options, because what is happening now isn’t working,” Kirby-Yung said.

Boychuk wants the police to conduct more foot-patrol at all hours of the day.

VPD spokeswoman Const. Tania Visintin told BIV that the force is doing this.

The VPD categorizes broken-window incidents under its catch-all “mischief” category. There were 1,446 mischief incidents in 2021, according to VPD data – down from 1,477 in 2020.

Visintin explained to BIV that the police’s “mischief” category includes a wide swath of crimes, including damage to vehicles, which fell during the pandemic.

“Mischief incidents are down, but broken windows are up,” she said.

The VDP does not segment out broken-window incidents, so Visintin is basing that assessment on her own observations.

BC Prosecution Service spokesman Dan McLaughlin told BIV that the Crown in 2021 received 471 reports from the VPD urging charges for mischief resulting in less than $5,000 in damage – the same number of reports as in 2020.

Last year, the Crown laid charges against 323 of the 515 individuals named in those reports, and the courts found 90 of those people guilty of offences.

Some of those cases may be ongoing, McLaughlin said.

He added that some of the findings of guilty could be for charges other than mischief that were levied at the same time.

McLaughlin did not have information on the most severe penalties levied for mischief, and he said court sanctions for those found guilty would depend on individual circumstances. •