The District of West Vancouver is planning for sea level rise, come hell or high water.

And the municipality may soon have a new permit required for anyone wanting to build on land at risk from coastal flooding.

Council voted Feb. 14 to advance the new regulations, which would impact about 780 residential properties in low-lying areas from Ambleside to Horseshoe Bay.

In 2018, the province ordered municipalities to start planning for a one-metre sea level rise by the year 2100 and adjust their foreshore development rules accordingly. Since then, the municipality has required new homes to be built above a minimum flood construction level, as calculated by coastal engineers. But the process has been confusing for owners, developers and would-be purchasers of waterfront properties, and it did not take into account environmental concerns on the foreshore.

Under the proposed new rules, a foreshore development permit will be required before anyone can subdivide a lot, build a new home or put a large addition on an existing one, or do any major landscaping within 15 metres of the high tide mark. Staff estimate about five to 10 of such properties are redeveloped per year.

The permits will also take into account landscaping, foreshore habitat protection, and stormwater runoff, while balancing views and privacy of adjacent property owners. Decisions about whether to grant a permit will be handled by staff, with the option to appeal to council.

The changes are subject to a vote by council following a public hearing, currently scheduled for March 29.

With flooding events becoming more common and more severe, Coun. Nora Gambioli warned the district would be putting itself at risk of lawsuits if council were to delay any longer.

“It's been over four years that we've identified this as a need as we were pulling together our [official community plan]. … It is more than time to have this public hearing,” she said. “The bottom line is that we're doing this to protect people and their homes and to protect the shoreline, so there are no downsides.”

Only Coun. Sharon Thompson said she was “very nervous” about moving ahead with new permitting procedures, warning it could produce unintended consequences, like rendering some properties “unbuildable.” She also expressed concerns the district hadn’t done enough consultation with waterfront property owners.

“I don't think there's another municipality where their personal citizens are so greatly affected by this change,” she said. 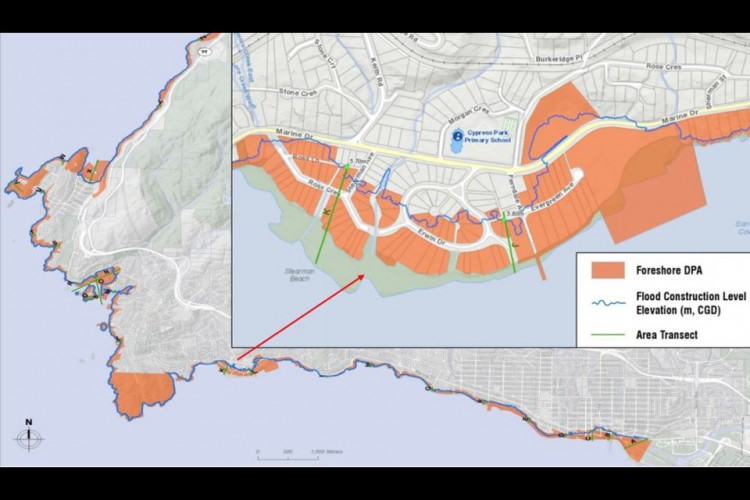 Areas highlighted in orange are at risk of coastal flooding and will be subject to new development permit rules | Image: District of West Vancouver

“The burden here isn't necessarily the development permit designation,” he said. “The burden or the challenge is the threat of floods.”

Mayor Mary-Ann Booth added that any further delay would amount to shirking council’s responsibility to accept and plan for a changing climate and higher sea levels.

“We can delay and delay and dither and study and consult. It’s not going to change anything. We are facing this and we have to deal with it,” she said. “And I think the sooner that we pass this, the less costly we'll make it for everyone.”

Earlier in the meeting, council accepted the final report of its Coastal Marine Management Plan Working Group, a group of citizens and experts tasked with advising council on how to brace for the impacts of climate change along its 30 kilometres of coastline.

The group’s plan lays out a series of short-, medium- and long-term policies for current and future councils to work on over the next 20 years. Those policies address issues like erosion, coastal flooding, increased storm activity, changes in sediment, impacts on ecological habitats and biodiversity, and threats to infrastructure and parks.

The district has still not yet finished repairing the damage done during the last major storm surge. Group chair Laurie Williams urged council not to dawdle on the action items in the report.

“I think that the storm of Jan. 7 brought home to all of us how timely this plan is. There is a need for new policy approaches to meet the challenges posed by a changing climate,” she said. “If there's anything good about the effects of climate change it is that the worst impacts are still years away. So in other words, we know what is coming and there's time to prepare. … It is our view that implementation must be a priority for all district departments.”