"Oh my goodness. Thank you to the members of the Academy for this amazing award," Lambert said in front of the star-filled audience.

"The effects is a team effort of hundreds of people around the world. So huge congratulations to all the artists and production from DNEG, Wylie Co. and Rodeo FX."

Myles went on to thank his family and "... of course, the outstanding work from all the artists at DNEG."

The film, directed by Canadian Denis Villeneuve, went on to gross more than US$400 million at the box office globally and now has a sequel in the works.

Germany’s Gerd Nefzer, Dune’s special effects supervisor, also took to the stage with the Vancouver-based trio to accept an Oscar for his own work on the film.

He was briefly cut off by the orchestra before being allowed to exclaim, "Danke schoen!"

The Vancouver team also worked on Blade Runner 2049, which Lambert and Nefzer won Oscars for in 2018.

Villeneuve directed that sci-fi sequel, too, which Gosling also headlined. 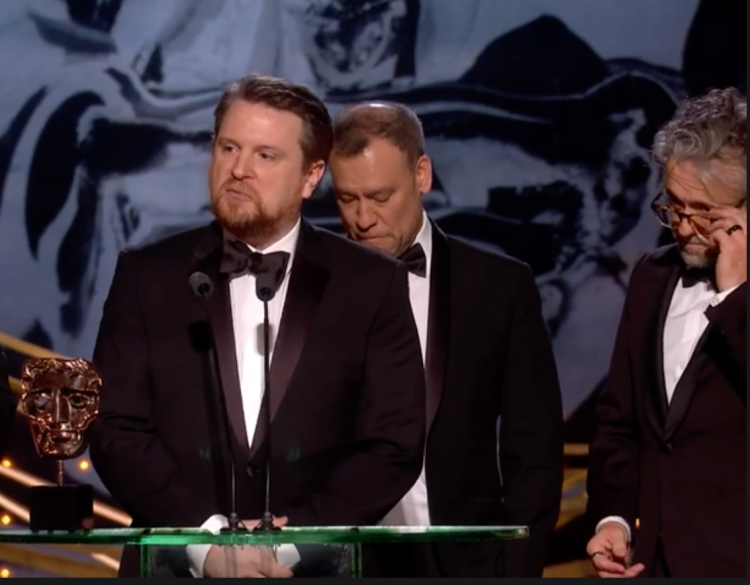 DNEG’s Montreal team contributed to some of the work on Dune, however, none of the VFX talent from Villeneuve’s home province received Oscar nominations.

Dune had been racking up award after award for visual effects in the lead-up to the Oscars, including four from the Visual Effects Society and one from the prestigious EE British Academy Film Awards (BAFTA).

It revealed plans back in August to hire workers for a new feature animation studio in the city amid efforts to expand significantly across Canada.

With the new capital in hand, the VFX company also embarked on launching a new studio in Toronto as well as expanding its Montreal office.

The Toronto studio will employ up to 200 workers, while up to 300 additional workers are set to be split between Vancouver and Montreal. The exact split between those latter two offices has not been set in stone.

The B.C. hiring plans encompass both the new animation studio, where as many as 100 animators are to be based, as well as at the existing VFX studio.

“And that’s what we’re really looking to tap.”

Plans to raise even more capital emerged this past January when DNEG announced it would go public via a deal with special acquisition company (SPAC) Sports Ventures Acquisition Corp. (Nasdaq:AKIC).

The SPAC deal, which is expected to close before the end of September, values DNEG at about US$1.7 billion.