Encorp April 2022
The Major Appliance Recycling Roundtable (MARR) is a not-for-profit stewardship agency created to implement and operate a stewardship plan for end-of-life major household appliances in the province of British Columbia on behalf of the major appliance producers.

The eco-friendly way to recycle your old fridge or freezer

April 25, 2022, 9:25am
MARR oversees the recycling system of major household appliances in BC | Photo: JCPJR-iStock-GettyImagesPlus

Do you have an old fridge or freezer that is sitting in storage, and you’re unsure of what to do with it?

Many large appliances used for cooling and refrigeration – such as fridges, freezers, and air conditioners – use chemical refrigerants that as a group are classified as ozone-depleting substances (ODS).

These chemicals can be very harmful to the environment so it’s crucial that the gasses are disposed of correctly by a trained professional, before recycling.

Fortunately, MARR makes it easy for everyone to recycle their old appliances safely with zero cost.

“If you have an old stove, fridge, freezer and more, you can bring it back to any of our 200 recycling sites and drop it off for free,” Zarbl says.

“Prior to MARR existing, a lot of sites would take your old fridges and freezers and charge you for the gas removal. People then faced a dilemma because they didn’t want to pay to have the gas removed. So, they were just releasing it instead, which is terrible.”

MARR was established in 2012 as a stewardship agency for end-of-life major household appliances. The recycling fee consumers pay when purchasing a new appliance is directed toward MARR operations.

While the home appliance industry is transitioning away from very high global warming, potential hydrofluorocarbon refrigerants (AKA greenhouse gasses) in refrigerators and freezers, room air conditioners, portable air conditioners and dehumidifiers, there are still generations of units in use today. 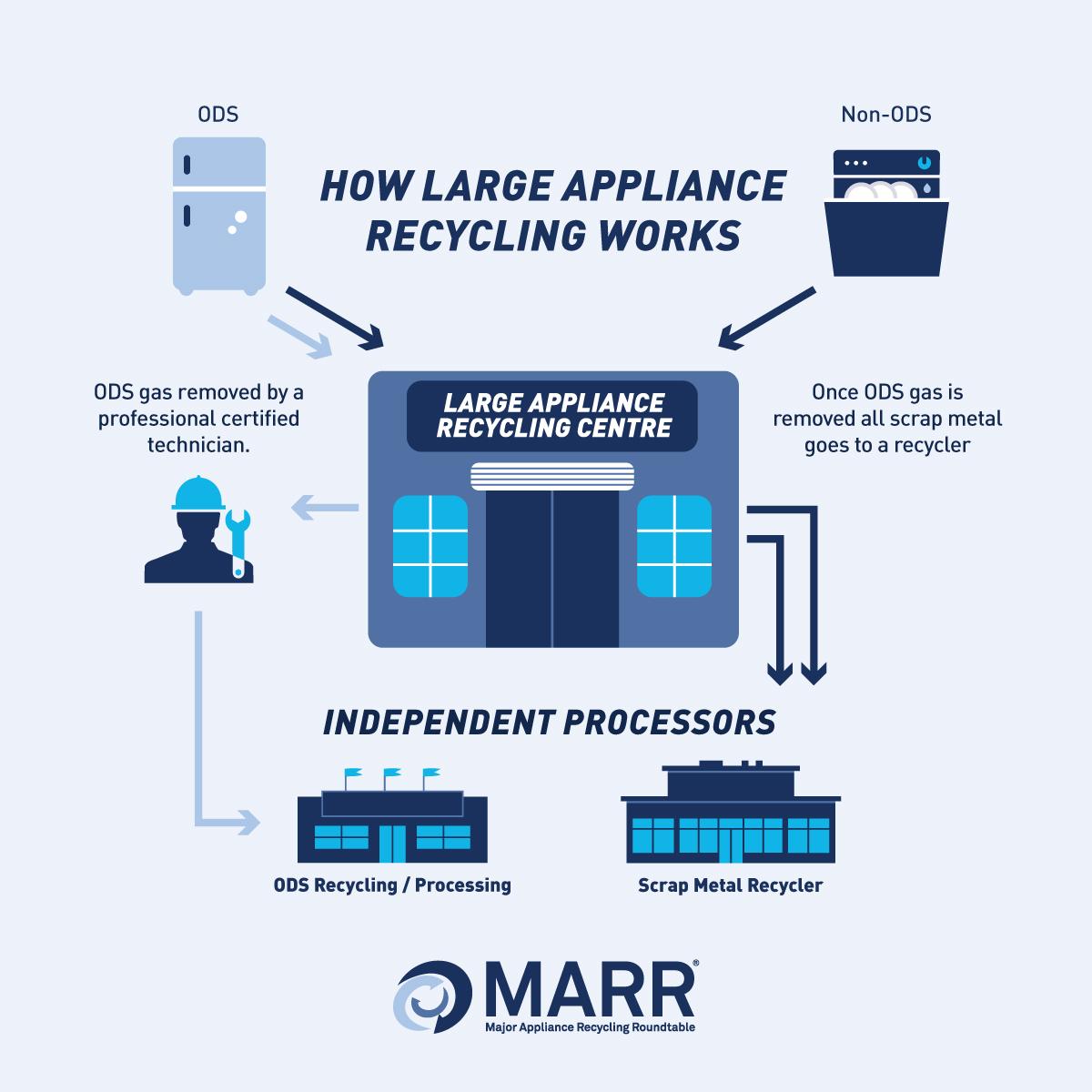 Leaving the units to deteriorate or dismantling them for scrap metal before extracting the gases could release harmful pollutants into the environment. All technicians that extract these gases are licensed professionals, which is why it’s crucial to deliver your old appliances to a MARR site for extraction and destruction.

“Prior to MARR, people were obliged to collect the gases and no one was managing the disposal, so it wasn’t being done properly,” Zarbl adds. “Collection agencies now have to provide proof that they have disposed of the gas in an environmentally sound manner.”

This involves burning the gas off at extremely high and controlled temperatures, so the molecules separate and the gas is no longer harmful to the ozone layer.

Zarbl cautions against dropping off old appliances at facilities that are not associated with MARR.

“Don’t dispose of them in another facility because you don’t know if it’s going to be done properly,” Zarbl says. “There are tons of metal recyclers out there who may not be doing it properly.”

For the rural regions of B.C., or wherever it is challenging to find a certified technician, MARR has created a training process.

Once prospective technicians have completed the federally mandated refrigerant course, MARR's experienced field agent visits the collector and offers practical training for the collector to be fully confident, independent, and compliant with the ODS extraction process.

Often, it is cost-prohibitive to remove old appliances from remote communities, where the selling price of scrap metal doesn’t cover the transport costs.

“In those cases, MARR steps in and goes to small communities and pays to have appliances hauled at no cost to the community,” Zarbl says.

To learn where to drop off your large appliances for safe recycling, visit www.marrbc.ca.