By Nelson Bennett | May 26, 2022
British Columbians would have found very little B.C. caught salmon for sale in 2020, thanks to record low Fraser River sockeye that year. | Chung Chow

Living in a province where the Pacific salmon is one of the provincial government’s official symbols, most British Columbians can be forgiven for thinking the salmon they buy in grocery stores were caught in B.C.

Most of the salmon British Columbians buy these days comes from Alaska – with some coming from Russia – both of which still have a viable commercial salmon fishery.

From a food security perspective, B.C. produces a surplus of seafood, much of which is exported. Wild salmon is the one notable exception. It is the species of greatest concern in B.C., especially for First Nations, for whom salmon is a dietary staple. First Nations are also increasingly concerned about herring stocks.

B.C.’s commercial catch of salmon has been in steady decline for three decades, while Alaska’s and Russia’s has increased. 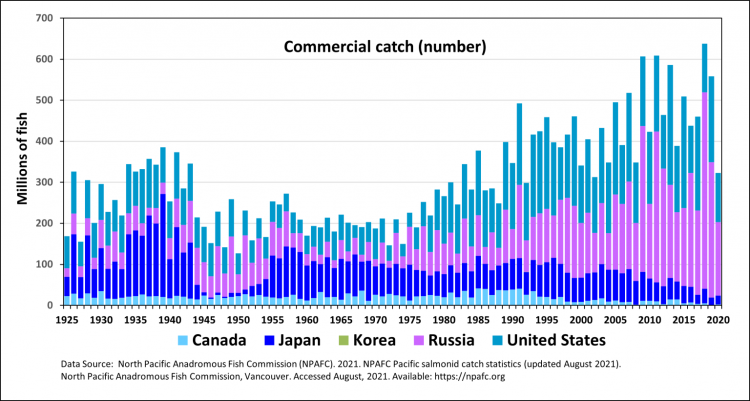 That’s partly because both Russia and Alaska have massive salmon ranching operations that pump billions of hatchery fish into the ocean to sustain a commercial fishing sector. But it’s also likely due to climate change, ocean temperatures and ocean carrying capacity, with salmon abundance generally shifting north.

The decline in Fraser River sockeye has crippled B.C.’s gillnet fishery, which has faced full closures in some years due to conservation concerns. Returns have been so low in some years that some First Nations have not been able to catch their allocations of salmon for food, social and ceremonial purposes.

“For sockeye, we’ve seen probably a 94 per cent decline in our biomass since the 1960s,” said Jordan Point, executive director for the First Nations Fisheries Council of BC. “For stocks like chum, we’re probably in the 80 per cent range of decline.”

“The trollers have done not too badly,” Young said. “They’re still marching along, doing their chinook and coho, and they’ve been doing OK. The gillnet fleet has been the hardest hit. For quite a few years they never got to fish on the Fraser.”

Meanwhile, as Fraser River sockeye continues a gradual, long-term decline in abundance, the federal government is moving to phase out open-net salmon farms in B.C. This raises the prospect that British Columbians could one day find themselves entirely dependent on other countries or provinces for salmon.

“I think that’s a real concern,” said Christina Burridge, executive director of the BC Seafood Alliance. “The time could come when basically all our salmon will come from Alaska. But even Alaska has some challenges, particularly in southeast Alaska and particularly with chum salmon, and that very much seems to be ocean conditions.”

Indeed, even Alaska saw an alarming decline in its commercial salmon catch in 2020. The global commercial catch for Pacific salmon in 2020 was the lowest in 40 years, according to the North Pacific Anadromous Fish Commission (NPAFC), and the Fraser River’s return of just 291,000 sockeye that year was the lowest in recorded history.

This year’s Fraser River sockeye return should be large enough to sustain an opening for gillnetters. Over the past two decades, Fraser River sockeye, which  generally have four-year life cycles, have experienced one super-abundant year every four years, followed by a sub-dominant year, and then two years of much lower numbers.

This year’s Fraser River sockeye return should be relatively abundant, due to the large Adams River sockeye population. The Pacific Salmon Commission (PSC) is expecting 9.8 million sockeye to return to the Fraser River this year.

“Depending on the assumed marine survival, returns can be as low as 2.4 million or as high as 42 million,” said Catherine Michielsens, the PSC’s head of fisheries science.

Andrea Frommel, a fisheries biologist and chair of the Sustainable Aquaculture at the University of British Columbia, notes that not all salmon species are in the kind of decline that Fraser River sockeye are and thinks it’s possible to stabilize salmon stocks.

“With proper management, salmon could really come back,” she said. “Pink salmon are actually … really strong.”

“Those are two species that people just don’t really like to eat. They’re not really targeted. It’s more the sockeye salmon and the chinook that are targeted, and they’re doing quite poorly. If we were to shift our preferences, I think B.C. could definitely supply the seafood for local consumption.” 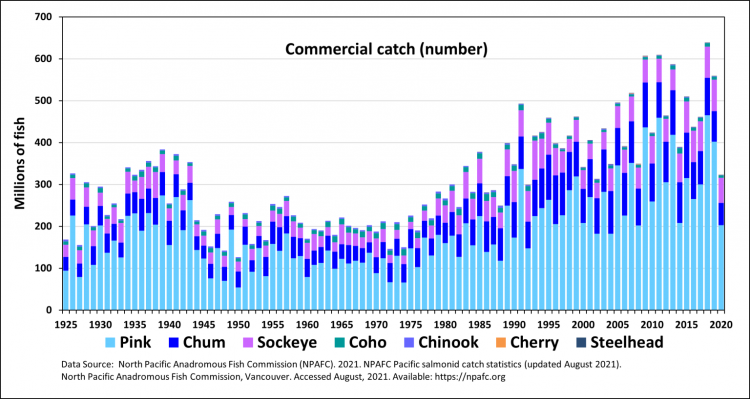 Pink salmon have grown in abundance over the last three decades.

In general, B.C. is a net exporter of seafood. It exports about 80 per cent of wild and farmed species and imports 70 per cent of the seafood consumed.

Some of those exports, like hake and geoduck, are species for which there is little to no demand from B.C. consumers. Most seafood imports are species not fished in B.C. waters, like certain types of tuna, freshwater shrimp and lobster.

Seafood produced in B.C. for which there is a local demand includes halibut, sole, ling cod, rockfish, spot prawns, crab and shellfish (oysters, clams, scallops and mussels). Unlike salmon, the populations and harvest levels of these species are relatively stable.

Even if B.C.’s salmon stocks could be stabilized, population growth dictates that aquaculture will be needed to augment wild fisheries. Since 1990, B.C.’s population increased by about two million people and is projected to grow by another 680,000 by 2030.

Globally, most fisheries are already exploited to their maximum capacity. The world’s oceans can’t provide more seafood on their own. So the world’s population either needs to stop growing, stop eating fish or start producing more seafood through aquaculture. According to the United Nations’ 2018 State of World Fisheries and Aquaculture report, the world is already dependent on aquaculture for nearly half of the seafood consumed.

Because of the decline in salmon – and more recently herring – First Nations have been looking to diversify their diets and economies by focusing on other species, as well as aquaculture.