The service agreement, designed to provide utilities from the city to the First Nation development, will sit in escrow until details are finalized

With the traditional, unceded territory of the Sḵwx̱wú7mesh Úxwumixw (Squamish Nation) as a backdrop, the First Nation signed a memorandum of understanding with the City of Vancouver for a service agreement, intended to provide utilities to a planned 6,000-unit housing development on reserve land near Burrard Street Bridge.

At a press event on Wednesday (May 25), Squamish council chairperson Khelsilem and Vancouver Mayor Kennedy Stewart penned the deal, which will sit in escrow until details are finalized. The agreement, when completed, should detail how services like electricity, water and sewage will connect to the Sen̓áḵw development.

It also includes significant upgrades to pedestrian, cycling, transit and road improvements in the area, many of which will blend into the surrounding city land.

The timeline of getting shovels in the ground appears to be delayed slightly, with an initial start date of late last year being pushed to sometime later this year. Squamish Nation spokesperson Sxwíxwtn, Wilson Williams said a completion date in 2027 is the current target. 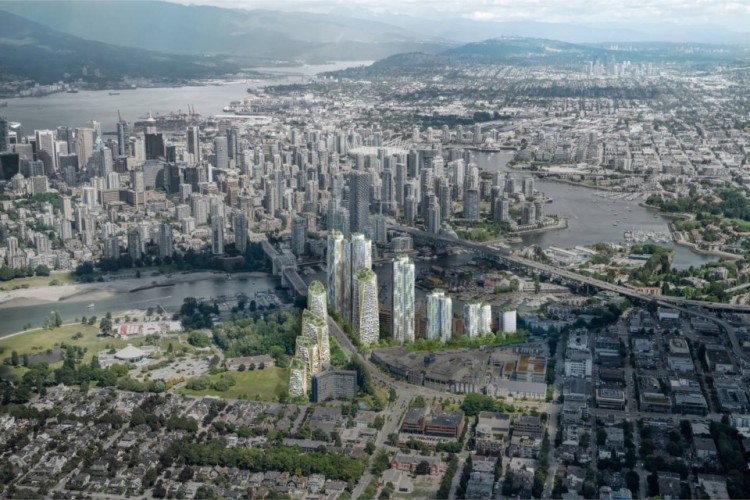 While Stewart and other members of local government are praising the landmark project, there has been pushback from some in the surrounding Kitsilano neighbourhood. Residents in the area have historically resisted tall residential towers. The tallest buildings in the Sen̓áḵw plan reach 56 storeys or higher.

Concerns have also been expressed about a potential service road going into the development.

At Wednesday's event, Nation spokesperson Syexwáliya, Ann Whonnock reminded the audience that the traditional name of the region is X̱ats'alanexw, the name of a Squamish chief. Before settlers came, the area had been home to the Squamish people for thousands of years, sharing the territory with xʷməθkʷəy̓əm (Musqueam) and Səlílwətaɬ (Tsleil-Waututh) peoples.​

And as the parcel in question is reserve land, the development doesn't have to conform to typical city rules, like a formal public consultation process.

"The truth is that because it's an on-reserve development, there isn't a lot of required engagement pieces," Khelsilem said. "But I think what this means is that there's actually a lot of opportunity for the Nation to be innovative and take different approaches."

He explained that there would be more public outreach, both within and outside the Nation, when more design and development specifics are available.

An example of where the plan breaks from city bylaws is parking requirements. As it stands, the project is intended for a majority car-less community, and won't provide sufficient vehicle parking for its population. 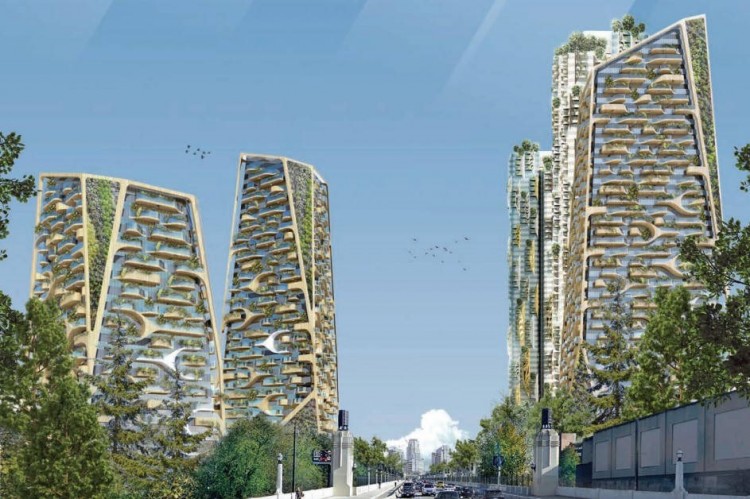 The development isn't restricted by city bylaws, but certain aspects of the infrastructure, like enhancements to the Burrard Street Bridge, involve co-ordination between the Nation and the City of Vancouver.Sḵwx̱wú7mesh Úxwumixw / Nch’kay West / Westbank

This project is significant for the Nation in many ways, said Williams.

"It will generate billions of dollars for the nation and set us on a path towards economic independence. Moreover, it will provide secure affordable housing for our members who need it most. Finally, the Coast Salish designs and architecture will promote our culture and remind the people that are out there on our shared traditional territories," he said.

Stewart said signing the agreement demonstrates the ongoing collaboration between Vancouver and the Nation, underlining the city’s commitment to reconciliation.

“The Sen̓áḵw development is a crucial and ambitious step forward in making Vancouver a city for us all,” he said. “I couldn’t be more proud to support such an historic and visionary project – the largest First Nations economic development in Canadian history.” 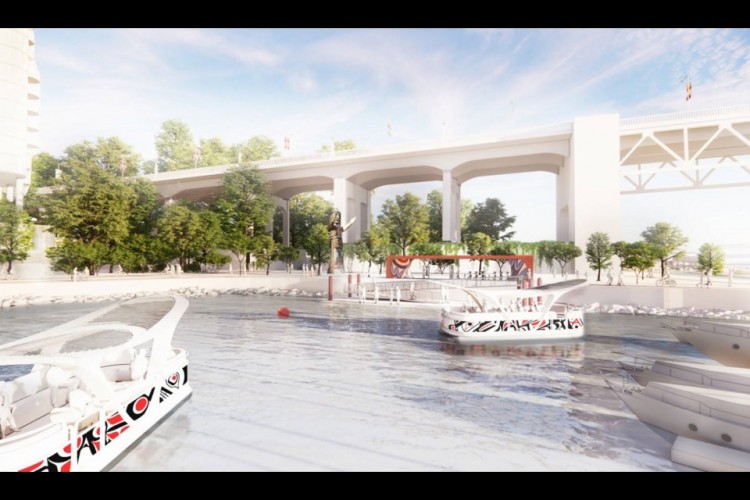 The development is designed mainly for people without cars, and includes plans to activate water taxis and light rail in the area | Photo: Sḵwx̱wú7mesh Úxwumixw / Nch’kay West / Westbank

In a 2021 update, the Nation said it made an agreement with the Canada Mortgage and Housing Corporation for what it called the largest loan in the Crown corporation's history. Much of the information on project funding has yet to be released.

Included in the development is 250 homes available to Squamish Nation members at reduced monthly rents in the first two phases of construction. Planners say the project will create a substantial number of jobs to Nation members as well.

The ambitious project officially got underway in December 2019, after a majority of Nation members approved development of 10.5 acres of land to build thousands of housing units.