Venture has expanded to North Vancouver and Toronto, with Burnaby likely later this year

Vancouver-founded Tiggy is using its almost $11 million in venture financing to rapidly expand the geographic footprint of its business that delivers groceries to customers within 15 minutes of ordering.

Tiggy operates six commercial sites in Vancouver and one in North Vancouver. The locations tend to be around 3,000 square feet, and each is stocked with up to 2,600 different kinds of food, or sizes of food – what is known in the industry as store keeping units (SKUs.)

Tiggy’s grocery depot sites stock items such as pastries from local bakeries and brewed coffee made on site.

The public is not allowed in Tiggy’s grocery depots. Instead, Tiggy employees work at the locations filling customer orders.

Tiggy has so far hired 150 people in Metro Vancouver and 50 in Toronto to manage operations, fill orders and deliver orders using bicycles. It aims to have 300 staff in B.C. by the end of 2022.

The company launched in Vancouver in September with one grocery depot and quickly added more, Bisovka said. North Vancouver and Toronto operations launched earlier this year. He anticipates expanding to Burnaby later this year.

To ensure orders are delivered within 15 minutes of the order being placed, Tiggy limits where it accepts orders. People who live south of West 37th Avenue in Vancouver, for example, are not eligible.

Staff update Tiggy’s app when items are out of stock, ensuring that customers buy only available products.

Most of Tiggy’s offerings are shelf-stable, but the company’s grocery depots have refrigeration capacity, so meat, chicken and produce are available.

There are no delivery fees so the company embeds those costs into its prices.

The Tiggy app gives customers the option to tip drivers, and if they do, the gratuities go to the drivers, Bisovka said. This is different from companies such as Save-On-Foods, which state explicitly on their websites that tipping delivery workers is not allowed. 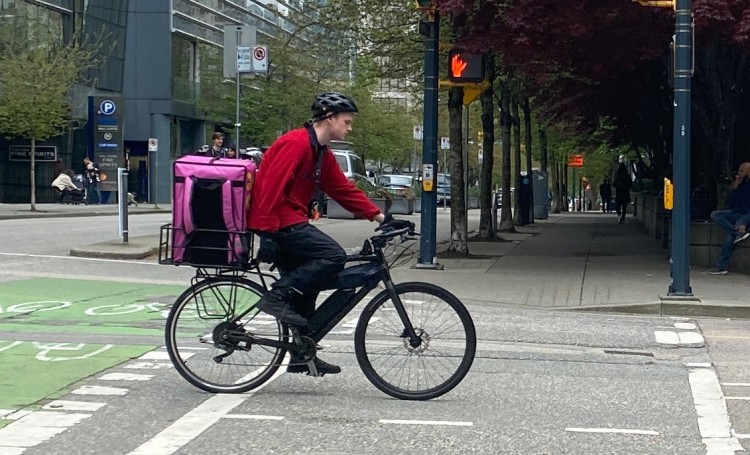 (Image: A Tiggy delivery driver cycles back to a Tiggy depot after delivering an order | Glen Korstrom)

Bisovka said he believes that his company is disrupting the way people buy groceries.

“If you have this on-demand option in your pocket, customers can spend less time buying in bulk,” he said.

“Something that is really good is that we do orders with things that you really need right now – for this breakfast, for this dinner or for this lunch. Nothing goes to waste.”

Tiggy offers no money-back guarantee if its orders arrive later than within 15 minutes, but Bisovka estimated that his company is able to meet that objective more than 90 per cent of the time.

Bisovka said angel investors that have invested in similar ventures around the world have also put money into Tiggy.

“That helps us a lot because they have so much expertise from this field. I think that’s our competitive advantage.”