By Glen Korstrom | June 7, 2022, 8:08am
Fairmont Waterfront general manager Jean-François Vary expects his hotel to be more than 80 per cent occupied this summer | Rob Kruyt

Tourism operators are excited about what they expect to be a flood of tourists this summer.

Whether the operator’s target market is budget travellers, mid-range visitors or high-end vacationers, their assessments are that there will be a surge in business compared with last year.

In some cases business is exceeding that of the pre-pandemic glory days of 2019.

The bespoke travel agency Fresh Tracks Canada’s agents are booking trips far more than they did three years ago, according to its vice-president of analytics, Bryan Baker.

The 82-employee, Vancouver-based national travel agency creates and sells tailored itineraries that include multiple excursions and hotels as well as transportation for guests.

That positions Fresh Tracks in the higher-end travel niche – one that Baker said he believes is benefiting from the phenomenon of revenge travel or revenge spending, where people spend lavishly on trips because they are tired of being cooped up at home.

Fresh Tracks agents in late May had booked 1,780 trips for May through September – 65.7 per cent more than the 1,074 trips the company booked in those months in 2019, Baker said.

Fresh Tracks’ customers are also booking longer trips than they did three years ago: 10.5 days on average, compared with 8.5 days in 2019, he said.

“Trips by train on the West Coast of Canada and into the Canadian Rockies have provided our biggest growth and are our most popular trips,” Baker said. “That is on the Rocky Mountaineer and VIA Rail [Canada Inc.].” 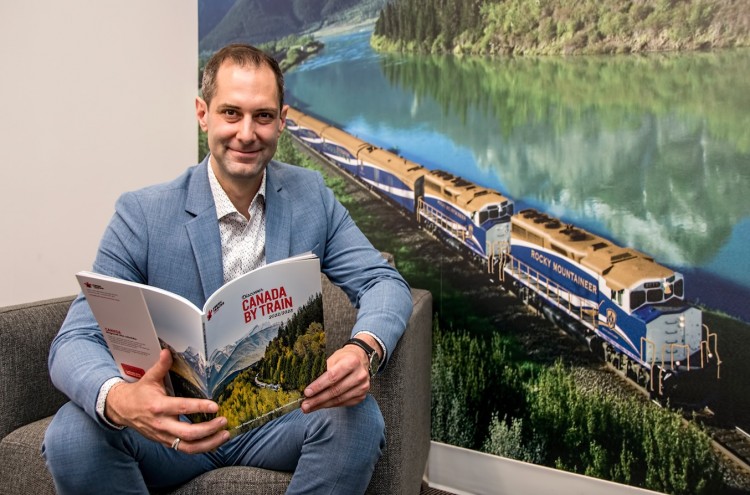 (Image: Fresh Tracks vice-president of analytics, Bryan Baker, said summer bookings at his company are up significantly over those in 2019)

She added that most Rocky Mountaineer customers – particularly North Americans – book trips directly instead of going through travel agencies.

“We operate longer trains on the two-day trips so we have more capacity,” she said. “We are at 80-to-85 per cent of our 2019 level right now, in terms of guests booked to travel, but we’re really optimistic that this will grow as people book closer to their travel dates.”

Bookings have surged during the past month, Ford said.

High-end hoteliers told BIV that business is increasing but they remain under 2019 occupancy levels.

Fairmont Waterfront general manager Jean-François Vary said he expects his hotel to be more than 80 per cent occupied this summer, which is down compared with 2019.

Vary said bookings are double what they were last year, and given how busy the hotel pool has been, much of the uptick has been from leisure travellers.

"Our ARC Restaurant is performing better than it's ever performed so we're seeing much more food and beverage revenue," he said.

Mid-range and budget hotels are also seeing a business bump.

Trina Notman, spokeswoman for the Victoria-based hotel chains Accent Inns and Hotel Zed, told BIV that those brands are “surpassing” occupancy in 2019.

“Some of the Hotel Zeds are mid-range accommodation, as is Accent Inns,” she said.

The Hotel Zed in Tofino might be described as higher end, Notman added, because it has rooms that go for $600 per night in peak season.

Destination British Columbia vice-president of global marketing Maya Lange said she expects B.C. summer tourism to boom in all budget categories, including travellers who drive to campsites and go hiking.

One minor fear is that rising fuel prices may prompt some people to cancel summer travel plans.

Overall, however, she is convinced that this will be a banner summer.

“They are only down 12 per cent from 2019,” Lange said. “I’m surprised at how quickly things are recovering.”

She recently returned from the industry trade show Rendez-vous Canada in Toronto, where she had extensive discussions with industry wholesalers who compile travel packages in countries around the world.

“Absolutely, travel and tourism globally is back in a big way,” Lange said.