In a new study, Canada has been ranked the third best country in the world to be a mammal on the move. Major successes include the Yellowstone-Yukon corridor and mountain wildlife migration routes between B.C. and Washington state

By Stefan Labbé | June 2, 2022, 2:25pm
A black bear walks down a road dividing a regional park and a blueberry farm in Coquitlam, B.C. At the edge of wilderness and human settlements, such border areas show clear signs of a fragmented habitat | Photo: Stefan Labbé

All sloths aside, mammals need to move. Without space, finding food, water and a mate is a dismal prospect, and in the worst cases, could spell the end of a species.

But in a world dominated by one species (humans) and the fractured landscapes it creates, which countries are best at keeping animal crossings open?

It’s a question researchers from the University of British Columbia set out to answer in research published Thursday in the journal Science.

The result, found lead author and University of British Columbia conservations scientist Angela Brennan: Canada had the third best ‘wildlife connectivity’ in the world, bested only by the icy island of Greenland and the small tropical South American country of Guyana.

“We are in a biodiversity crisis,” said Brennan, who is also a fellow with the World Wildlife Fund.

“Fragmented landscapes are one of the major drivers of biodiversity loss.”

Without human influence, a mountain range, river or ocean has always prevented species from expanding their range.

But add humans to the mix and landscapes further fracture under the weight of rail lines, highways and navigable waterways filled with boats.

Add to that land fenced off for crops and pastures or reserved for towns and cities — lit up at night, no less — and mammals are finding it increasingly difficult to survive.

While past research has shown protected areas work, the latest study out of UBC found they have failed to slow the loss of biodiversity on the planet. Part of that is due to their proximity to people: more than 90 per cent of them sit within a human-dominated landscape.

That’s a problem, not just for the survival of individual animals, but for ensuring gene diversity, and therefore, the health of entire populations.

To build their national ranking of best connected protected areas, Brennan and her colleagues captured all the human-triggered fissures on the landscape through something called the human footprint index.

Some nations — like Canada and Guyana, which have relatively low population densities at about four humans per square kilometre — scored near the top. Other nations with both higher human population densities and important mammal corridors suffered in the ranking when protected areas were more isolated from one another.

Canada’s neighbour, the United States, came in 18th in the ranking, whereas Brazil, home to much of the Amazon rainforest, came in 20th spot.

But the ranking also masks small differences between some countries.

“I’m not sure that Brazil is much worse than the United States — because the actual value between them is quite small,” said Brennan.

The research team found the best connected protected areas occurred in the planet’s most intact biomes: the boreal forests and tundra — largely in northern Canada, coastal Greenland, Scandinavia and Russia. 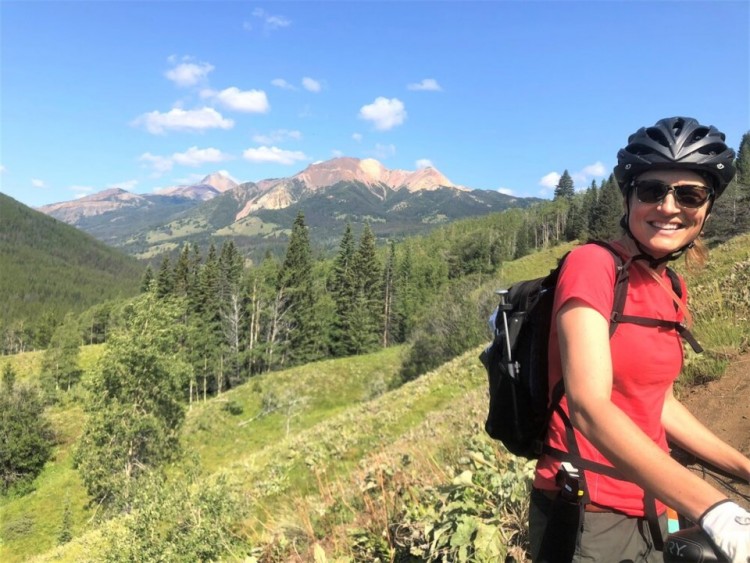 Angela Brennan on a field project in the South Chilcotin Mountains of B.C. A researcher at UBC, her latest work has mapped the natural highways for wildlife across the planet. Courtesy Angela Brennan

Brennan didn’t stop at the scale of the nation state.

Two of the big success stories to come out of the research involved a major wildlife corridor stretching between Yellowstone National Park in the U.S. state of Wyoming and Canada’s Yukon territory; another well-trodden path runs from British Columbia’s Coast Mountains to the North Cascades range in Washington state.

The corridors benefit a wide variety of wildlife, from elk, wolves and caribou to lynx, cougars, grizzly bears and wolverines.

But in many other areas, the prospects for migrating wildlife are less promising. The researchers found two-thirds of the world’s critical wildlife corridors are unprotected; almost a quarter of those crossings are also prime candidates for agricultural development.

What can countries do better to help wildlife on the move?

Brennan found reducing the overall human footprint of a country was twice as effective as simply creating more protected areas. And by doing both, countries could drop the level of isolation animals experienced living in protected areas by 43 per cent.

Developing ways to share land with wildlife is critical to allow everything from pollinating bees to migrating elk space to roam, notes the report.

The study did not assess the status of wildlife corridors for small mammals, birds or other creatures.

Another important caveat, said Brennan: the rankings are based on country averages, meaning there could be significant differences between Canada’s north, where human population density is low, and the country’s lower latitudes, where most people live.

Brennan said it's also clear the ranking will evolve as mammals confront landscapes transformed under a shifting climate.

“They may have to shift their range — where they move, where they can live,” she said.

“Ensuring that your landscapes are connected will help animals navigate and respond to climate change.”