Two environmental groups are suing the Canadian government for what they claim are unlawful extensions of offshore oil and gas permits dating back to the 1960s.

Two environmental groups are suing the Canadian federal government over 20 oil and gas “sleeper” exploration permits originally granted off the coast of British Columbia in the late 1960s and 1970s.

The application for judicial review, filed in a federal court on behalf of the World Wildlife Fund Canada and David Suzuki Foundation, claims the federal government has unlawfully extended the permits in violation of the Canada Petroleum Resources Act.

“The central argument that we're advancing is that those permits are expired and the federal government has unlawfully kept them alive and on the books for more than 40 years,” said Ecojustice staff attorney Ian Miron, who is repressing the two plaintiffs.

“We certainly think that the threat of oil and gas exploration… is not an abstract one.”

Miron pointed to the Bay du Nord offshore oil project approved this year off the coast of Newfoundland and Labrador as an example of how the government is still approving major extraction projects despite its climate commitments.

The permits cover an area spreading out over 5,840 square kilometres in the Hecate Strait Glass Sponge Reefs Marine Protected Area and the Scott Islands Marine National Wildlife Area off the northwest coast of Vancouver Island. 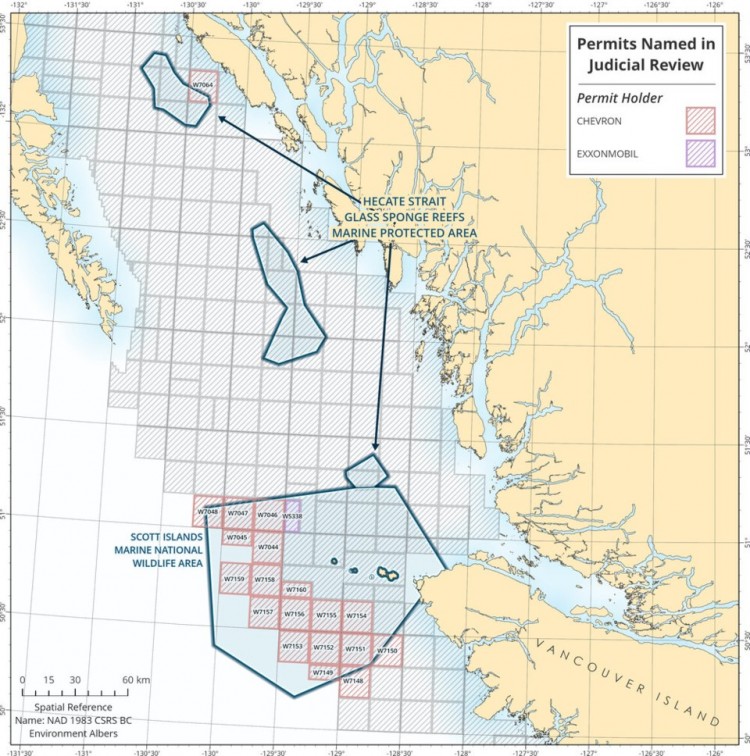 The coastal sanctuary has the highest concentration of breeding seabirds on Canada’s Pacific coast, and the islands provide habitat for 40 per cent of all B.C.’s seabirds.

That includes several species listed as “at risk” by the federal government, including marbled murrelets, short-tailed albatross and the sooty shearwater.

Four of the Hecate Strait glass sponge reefs, meanwhile, are thought to be 9,000 years old. Before they were discovered, they were thought to be extinct worldwide, only surviving in the fossil record dating back to the late Jurassic period.

Described as “exceptionally fragile” and vulnerable to human activity, the glass sponges “play an important role in marine carbon and nitrogen processing,” according to the Ministry of Environment and Climate Change.

“In a nutshell, these two ecosystems support a thriving biodiversity but also contribute to thriving culture and livelihoods for the communities along the coast,” said Miron.

Miron said the environmental groups are taking the matter the court as a last resort after questions to the federal government and the two companies that hold the permits — Chevron Canada and ExxonMobil Canada — “fell on deaf ears.”

“We do think there is some urgency to taking these permits off the books,” said the attorney. “Our clients believe that the mere existence of these permits in these protected areas is actually hampering efforts to fully protect and manage the areas.”

Glacier Media reached out to the Ministry of Natural Resources and ExxonMobil Canada, but neither responded to a request for comment by the time of publication.

If the defendants choose to fight the application for judicial review, a case could reach a federal court within a year, says Miron.