Doctor Copper tells global economy to get some rest

It’s called Doctor Copper for a reason. Copper prices are a key vital sign for the world’s economic health.

So what does a recent 30% plunge in copper prices – as well as other key commodity prices, like lumber – say about the state of the global economy?

Full-blown recession? Possibly. Rampant inflation, rising interest rates, an energy crisis, war in Ukraine, episodic spikes of COVID-19 in China – the economy is certainly getting its share of knocks.

But given the strong employment numbers coming out of the U.S. and Canada – which suggest both countries are near full employment -- it more likely augurs an economic cooling, not a full-blown recession, according to Patricia Mohr, a former commodities analyst with ScotiaBank who now writes a critical metals newsletter for Capitalight Research.

“I think there will be a slower pace of global economic growth by the second half of the year, but I think it will just be a fairly mild pace of slow-down,” Mohr said. “We’re not going to have anything like the 08 recession.

“You’ve got very good employment conditions, but sooner or later these high prices are probably going to slow consumer spending, which is what the market’s worried about.”

Near the end of March 2020, as economies were shutting down everywhere in the early stage of the COVID-19 pandemic, copper prices fell to US$2.10 per pound.

Analysts had been predicting a new supercycle for metals and minerals, driven in no small part by resumed economic growth in China, and an energy transition that the International Energy Agency forecasts will require a sixfold increase in metals and minerals by 2040.

But since the beginning of this year, COVID-19 came back to haunt China, and Russia invaded Ukraine – something which has significant consequences for commodities, especially oil and natural gas, and European industries that rely on it.

Copper prices recently dropped by about 30% from their March high, to about US$3.28 per pound. 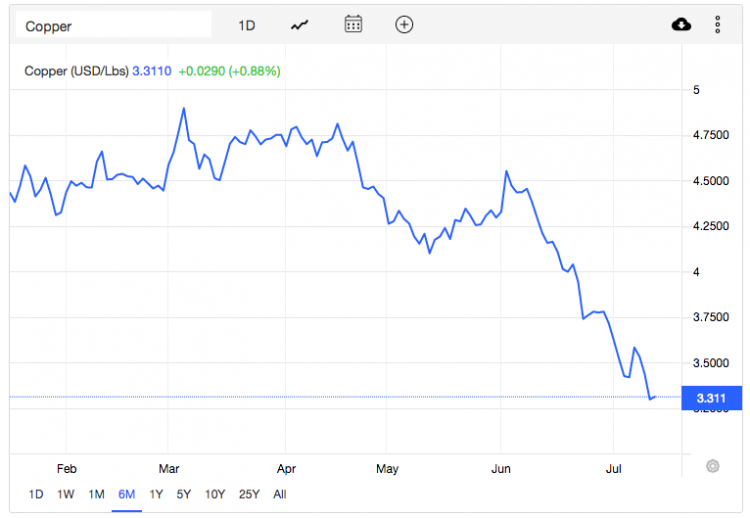 China consumes about 50% of the world’s copper, so any slowdown there has a big impact on copper demand and prices.

China, which has comparatively low vaccination rates, has been playing whack-a-mole with COVID-19, resorting to strategic quarantines to deal with outbreaks. As a result, the World Bank has cut China’s economic growth forecasts for 2022 from 5.1% to 4.3%.

If any economic region does experience a recession, it may be Europe, which is the world’s second largest consumer of copper. Europe is experiencing a full-blown energy crisis, exacerbated by Vladimir Putin’s war, which has left some European countries, notably Germany, in a state of energy poverty. Some industries that rely on natural gas have had to shut down, as natural gas has become unaffordable.

Despite forecasts of an economic slowdown, Mohr remains bullish on copper and other critical metals because the fundamentals are still very strong. Even with some new major copper mines about to go into production, she thinks the demand for copper will remain strong.

“Medium term, the outlook is very good for copper, and I continue to be quite bullish,” Mohr said.

In North America, another bellwether commodity is lumber, which reflects the strength of housing markets.

Lumber prices have fallen by more than 60% since March. But because the backdrop of that fall was unprecedented highs, it looks worse on a graph than it is in reality.

B.C. lumber prices for spruce-pine-fir (SPF) two-by-fours for July are now US$650 per thousand board feet. That is a price that – when the anomalies of the last two records are removed – still represents a previous record high.

In 2018, lumber prices reached US$665 per thousand board feet, which was a record high. So despite a 60% drop since March, the current prices are still “very good,” said Russ Taylor, president of Russ Taylor Global Wood Business and Market Consulting.

“My perspective is that lumber prices will likely dip in August into the $500 (US) range before bouncing back in September at higher levels despite the expected slowdown in U.S. housing starts,” Taylor said.

“There is still huge pent up demand for housing and I expect that once the mortgage rates peak and the housing prices move lower, that will make move people back into the market in 2023. Overall I am mildly bullish on lumber prices.”