Longtime store has expanded into former space occupied by Omega

By Glen Korstrom | July 14, 2022, 8:08am
Gucci's store at the Fairmont Hotel Vancouver is its largest in Canada | Pablo Enriquez

Gucci had occupied slightly less than 4,000 square feet at the hotel since it first opened its boutique in 2006. It has now expanded into approximately 2,300 additional square feet to create a 6,200-square-foot destination – one that is larger than the brand's 6,000-square-foot flagship store on Bloor Street in Toronto.

With more square feet, Gucci can expand offerings from what was largely womenswear to include menswear and items from the brand's new Pet Collection.

This is the first time the brand has sold menswear in Vancouver in its own store, Retail Insider Media owner Craig Patterson told BIV. In the past, Gucci menswear would only be for sale in the city at places such as its kiosk at Holt Renfrew.

While it is unclear exactly what items the Hotel Vancouver Gucci store will stock, the company's new Pet Collection includes items such as $830 water bowls, $405 leashes and $725 small and medium pet harnesses.

The store's real estate also includes space on a mezzanine level that Patterson said it is likely to use to store inventory.

Omega opened a 400-square-foot store in the hotel in the lead-up to the 2010 Winter Olympic Games because the Swiss watchmaker is a longtime Olympic sponsor. Success prompted it to soon afterward expand the location to 2,300 square feet. Its new location in the hotel is 1,937 square feet, according to Patterson.

Gucci's parent, Paris-based Kering Group is one of the world's largest luxury retailers, with more than 17.6 billion Euros in 2021 revenue. In addition to Gucci, Kering owns  global brands such as St. Laurent, Alexander McQueen, Brioni, Boucheron and Balenciaga, among others.

Patterson said he has heard that the company is eyeing opening a Balenciaga store in Vancouver. No one from Kering immediately responded to BIV's request for information about such a store.

One luxury-store move in the works is at French watchmaker Cartier, where the subsidiary of the Swiss Richemont Group is set to soon occupy 3,200 square feet at the corner of Alberni and Burrard streets, and close its location at 456 Howe Street. 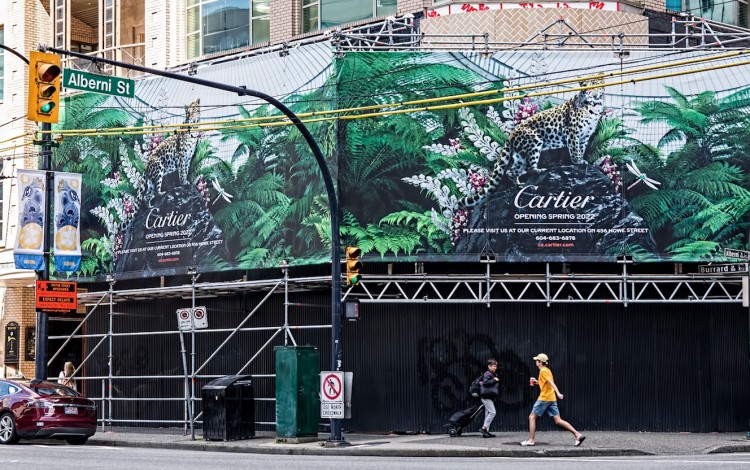 (Image: Cartier has hoarding on a location at the corner of Alberni and Burrard streets | Chung Chow)

While Patterson said he expects Gucci to keep its kiosk at Holt Renfrew, he said other brands may cut ties with the Toronto-based company because of new policies that Holt Renfrew has put in place around not allowing merchandise to contain fur or exotic animal skin.

Late billionaire W.G. Galen Weston, and his family, have owned Holt Renfrew for decades. They bought British retailer Selfridges & Co. in 2003 for what was reported at the time to be $1.4 billion in cash, and merged the ventures.

The family then earlier this year sold Selfridges & Co. to Thailand's Central Group for an undisclosed amount that was rumoured to be more than $7 billion, but they hived Holt Renfrew off, and continue to own the high-end retailer.

"Brands are seeing that they can do better on the street – they don't need Holt Renfrew," Patterson said. "They can have their own standalone stores. I'm predicting Chanel will open its own stand-alone store in Vancouver."