A previous job back in the mid-2010s found Stuart Lilley visiting operators within the food industry, identifying their food waste and then finding ways to divert that waste from landfills to livestock feed.

“We were really successful at doing that,” he said about his time as a business development consultant with Enterra Feed Corp.

“But every day I was doing it … I was taken aback by how much of the food should have been recovered for people.”

He began envisioning a system where excess food went back to people first, then to livestock and that whatever remained could still avoid the fate of a landfill or composting facility.

Lilley, founder and chief visionary officer of Langley-based ReFeed Canada Farm Ltd., is now seeing that vision come to fruition with the spring launch of his company’s vertical worm farm, a chrome, three-level setup featuring a pair of 14-metre-long beds on each level, where more than 450 kilograms of worms and feed reside in each bed. 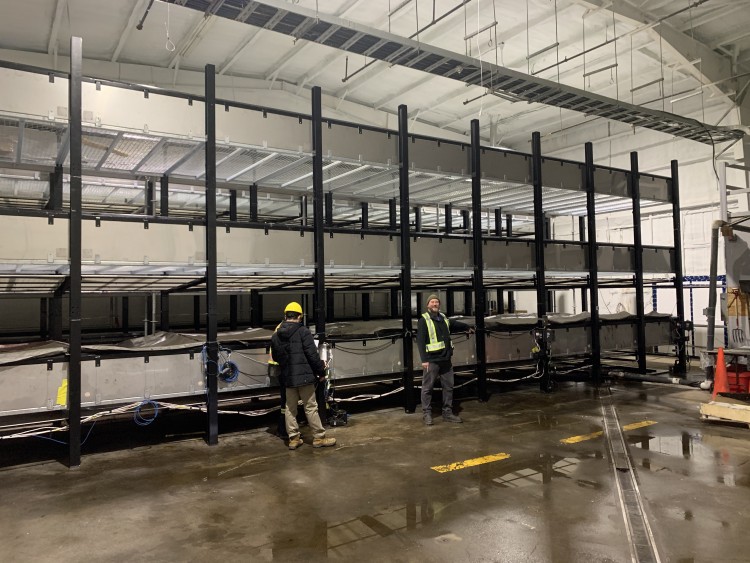 
“We created this whole, complete close-loop system,” Lilley said, adding 100 per cent of the produce ReFeed sorts through is ultimately able to be used in some capacity.

The business model sees produce warehouses, distributors and importers pay ReFeed to collect by-product that would otherwise be used for composting.

“That to me is a sustainable system. To do it for free, there's no value,” Lilley said. “And unfortunately, I've seen so many iterations of those companies come and go.”

ReFeed workers then sort the excess produce between what’s fit for human consumption and what’s best for livestock feed. The produce and livestock are delivered to organizations like food banks and dairy farms, respectively, which in turn pay ReFeed for that service.

“It reduces the cost and the requirements for food banks and other charities from having to do it themselves, which would have been their own costs, and reduces their labour,” Lilley said.

Last year ReFeed recovered 2.7 million kilograms of produce this way, while what remains is going into ReFeed’s vertical worm farm.

The worms live in their beds and consume a “special blend of inputs” that the company processes into their feedstock, which the worms in turn poop out, according to Lilley.

About six million worms can live within ReFeed’s three-level vertical worm farm when it’s at full capacity, eating and pooping out about 1,000 kilograms of manure – or worm castings – a day (the modular farm system can support a fourth level, if needed).

The castings are then used for products such as organic fertilizer that consumers might use for home gardening.

“We also create products for agricultural purposes to support farmers converting to regenerative agriculture over conventional,” Lilley said, referring to the practice of focusing on soil health rather than crop yield.

For example, farmers can pay ReFeed to take their own manure cakes, centrifuge the manure and then use that product as feed for the worms. The products can also be used for regenerative farming practices.

“So whether it's for the consumer or products for the farm, everything is coming from a source of a by-product that's local,” Lilley said.

The worms are sourced from both Canadian suppliers as well grown on-site by ReFeed. So far two of the farm’s beds are filled with worms, while Lilley expects the farm to be at full capacity (all six beds) by early next year.

“Our growth strategy is to have these facilities across the country so that you're creating localized manufacturing facilities of soil microbiology and soil amendments that are going to be needed as we focus on localized food security,” he said.