New Vancouver Quiznos to be template for global chain

By Glen Korstrom | July 21, 2022, 9:09am
The Quiznos branding at its SE Marine Drive store has lime green branding unlike the olive green and red branding at other Vancouver stores | Chung Chow

A new Vancouver Quiznos location comes with tweaked logo, altered corporate colours and additional kitchen equipment that enables it to have an expanded menu compared to the approximately 500 other Quiznos stores worldwide.

“The intent with both of these first two prototypes is to learn what works and what doesn’t work because we don't want franchisees to invest in something that doesn't make sense for them,” he told BIV.

The store's Quiznos logo is lime green, instead of olive green and red, which is the case at other Vancouver locations.

Quiznos has long looked to Vancouver as a key market.

Alvin Blais and Chris Moradian opened the chain’s first international location, in 1996, on West Broadway at Heather Street. That duo then bought Quiznos’ Canadian master-franchise rights in January 1998, and ambitiously aimed to operate 650 locations Canada-wide by 2008.

They sold those master franchise rights to partners in 2001, with the rights later reverting back to the U.S. parent company.

All Canadian Quiznos locations are now directly franchised out of Denver.

Quiznos enjoyed phenomenal expansion in the early part of this century, before enduring some stumbles. 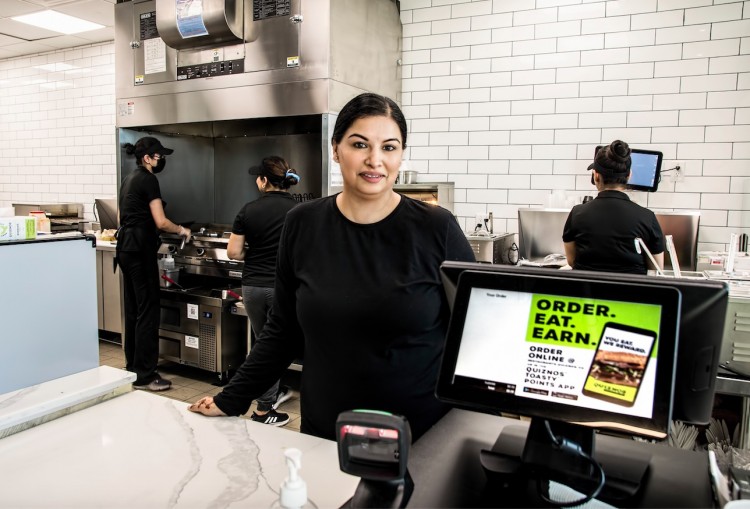 (Image: The flat-top grill in the background is where the meat for Philly cheesesteak sandwiches can be prepared | Chung Chow)

In 2009, for example, it agreed to pay a US$95 million out-of-court settlement to 6,900 franchisees in a class-action lawsuit that alleged that the company overcharged franchisees for supplies and failed to provide sufficient marketing support.

That time period included the company filing for bankruptcy protection in 2014, when it was more than US$500 million in debt.

On hand were South Korean master franchisees who plan to soon open their 100th location in that country, said Lohmann.

“We’re in 20-plus countries globally,” he said. “There are roughly 300 Quiznos in North America.”

All Quiznos locations are franchised except for one corporately owned store, at Denver International Airport, he said.