By Graeme Wood, Glacier Media | July 19, 2022, 8:05am
Ted Lea resigned from his profession following a complaint made against him, when he disputed a District of Saanich bylaw aimed to protect Garry oak trees.| Handout

An old quarrel over an environmental protection bylaw in the District of Saanich has branched off into an ongoing dispute between residents and the province’s regulator of biologists — one lasting longer than the bylaw itself.

The bylaw was passed in 2012 with the goal of protecting sensitive ecosystems, including Garry oak ecosystems, on about 2,200 private properties. It was rescinded in November 2017 after an outcry from affected property owners who were worried the bylaw would pose difficulties should they wish to redevelop their properties.

In fighting the bylaw, Saanich Citizens for a Responsible EDPA Society, which formed in 2015, hired registered biologist Ted Lea to assess their properties. Lea, a Saanich resident, also became a scientific advisor to the society.

Lea’s involvement eventually led to a saga that the society says highlights bureaucratic roadblocks the public may face when challenging industry regulators.

Saanich’s environmental planner launched a complaint against Lea to the College of Applied Biologists in 2016 after Lea wrote numerous reports for homeowners saying the bylaw should not apply to their lots.

A hearing took place in June 2018, a year after Saanich council rescinded the bylaw based in part on Lea’s reports. In January 2019, a discipline panel found some procedural and ethics violations by Lea, including disparaging the environmental planner’s work, along with a conflict of interest because Lea was a member of the society and owned a property affected by the bylaw.

Lea was handed a $7,000 fine, a six-month suspension and a $60,000 bill covering costs to restore his professional standing. Instead, he paid the fine and resigned from the college. He also chose not to appeal, citing costs.

Lea told Glacier Media he accepted some of the college’s findings, but maintains his science was correct.

“The college finally came to the conclusion that my assessment results were ‘probably right’ — after going to a hearing saying that I had just rubber-stamped reports,” said Lea, who noted Saanich Mayor Fred Haynes supported his assessments publicly to the media.

Lea took issue with the college’s investigative process. He said he was not interviewed, nor did the college seek conflict resolution before proceeding to a hearing. Lea says he was not informed of the complaint against him for 11 months, then was given just 30 business days to respond. He says his lawyer also had no opportunity to examine the complainant — the Saanich planner — during the hearing.

“I do not want to see any other college member go through what I have gone through,” Lea said.

The college, which has about 3,000 members, was the first of its kind in North America to regulate professional biologists when founded in 2003. It handles roughly one citation each year, and Lea’s case was substantial, costing about $150,000.

In May 2017, several society members filed formal complaints of their own against the Saanich environmental planner, claiming, among other things, that the planner was a member of a Garry oak conservation group and thus in a conflict of interest.

Anita Bull, one of the chief complainants, describes the subsequent process as “very frustrating.”

“We weren’t treated fairly; they never spoke to us,” Bull said.

In July 2018, the complainants received a letter from College of Applied Biologists executive director Christine Houghton saying the complaints against the Saanich planner had been dismissed. Houghton said the allegation of conflict of interest had been extensively investigated.

However, Bull said the college failed to interview the complainants and gather more information before seeking a legal opinion that determined it ought not to proceed with a hearing.

Before receiving the letter, Bull claims, the college continued to tell the group an investigation was occurring despite the complaint being dismissed months earlier.

Another Saanich environmental planner also wrote a letter to the college disagreeing with her colleague’s assessments of the bylaw and the complaints against Lea.

“Her complaint was fully dismissed by the college without any investigation, as well,” says Lea.

Houghton told Glacier Media she could not speak to any specific case due to privacy reasons. But she said the college is within its rights to dismiss a complaint with a legal opinion and without fully investigating. 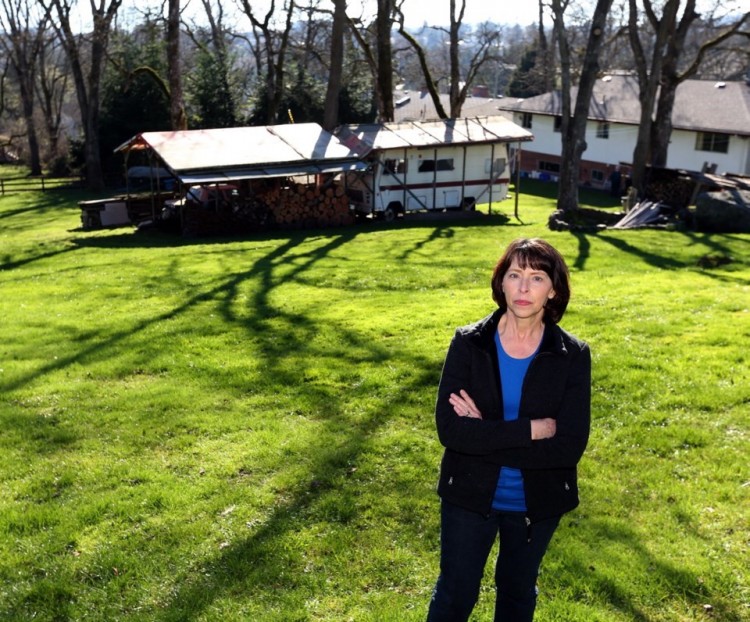 Anita Bull was one of about a dozen Saanich residents who created a lobby group against an environmental protection bylaw that has since been rescinded. Now, the group seeks to understand how regulatory complaints against biologists involved in the bylaw dispute were handled. Times Colonist file

No way for public to appeal, group finds

Frustrated, the group turned to the B.C. ombudsperson, Attorney General, Ministry of Environment and the Office of the Superintendent of Professional Governance.

The superintendent has oversight of the Professional Governance Act, which governs the college’s policies, but told the complainants it does not address individual complaints — only “systemic” matters.

When Glacier Media asked the superintendent’s office if it would be reviewing how decisions may be appealed and investigations processed under the act, a spokesperson for the Attorney General said a standard review of the college is underway and information from the review of the complaints and disciplinary process will be taken into consideration as the office moves toward more formal performance reviews in the future.

The superintendent’s office noted much of these processes are new, as the act only came into force on Feb. 5, 2021.

The group, including Lea, also filed a complaint with the B.C. ombudsperson in November 2020.

The ombudsperson investigated and found the college did not investigate the complaints against the planner but instead sought a legal opinion that led to the allegations being dismissed.

The college also did not provide the group with the planner’s submissions for rebuttal and didn’t contact the group further as part of an investigative process. But, upon reading the College of Applied Biologists’ policies, the ombudsperson told Bull in a Feb. 2, 2022, letter that it was “unable to suggest that the CAB reached an unreasonable decision when dismissing the complaints.”

“While we were unable to suggest that the legal opinion, or the CAB’s acceptance of it as a reason for dismissing the complaints, was unreasonable, it was nevertheless clear that the CAB had provided you and the other complainants with incorrect information about an investigation, thereby causing confusion and understandable frustration,” wrote ombudsperson officer Matthew Chapman.

In further correspondence, the ombudsperson noted that under new rules, the college is required to provide more “fulsome, transparent explanations” when it dismisses complaints, writing: “it appears that moving forward, complainants will receive more detailed explanations for the CAB’s decisions, even when complaints are dismissed without investigation.”

Ultimately, the ombudsperson compelled the college to apologize to the group for not clarifying its process and to divulge more details about the decisions it had reached.

“We were expecting a full investigation, as that is what we were told by the CAB, but it never occurred. Whether these actions by the CAB in this matter legally require our collective complaints against the CAB member be re-opened, doing so, with full transparency, would be the right thing to do and would best serve the public interest,” Bull wrote to the board last month.

Bull also claims the college delayed providing her with documents related to her complaint, including responses from the planner.

The group is now seeking remedies for future cases, such as an appeal process for complainants to the college who are members of the public, not just members.

“My experience has been very frustrating because it has taken years. There’s no appeal process with the college for the public; it’s only available for members,” said Bull.