By Tyler Orton | August 4, 2022, 3:58pm
Avcorp CEO Amandeep Kaler estimates the F-35 program could be worth as much as $1 billion for his Delta, B.C., company in the decades to come | Lockheed Martin

A pall of uncertainty hanging over Amandeep Kaler for years finally lifted from him in March, when Ottawa announced it was ordering 88 of Lockheed Martin Corp.’s (NYSE:LMT) F-35 stealth fighters.

“Having the Canadian government make that decision helps companies like us that are small,” said the CEO of Avcorp Industries Inc. (TSX:AVP), a Delta, B.C.-based aerospace firm that builds components for the F-35C jets the U.S Marine Corps uses on aircraft carriers.

“Now we can go in to make these and other investments because now we think we can get additional work for a long period of time on a platform that's going to be around for multiple decades.”

The federal government spent more than 10 years going back and forth about purchasing the F-35 fleet, which is meant to replace the Royal Canadian Air Force’s (RCAF) aging CF-188 Hornets. The former Conservative government’s initial cost estimates were off by a significant margin and the Liberals promised to scrap plans to procure the stealth fighters when they formed government in 2015.

Flash forward almost seven years and the Liberals eventually decided the F-35A variety was the best bet for the RCAF.

In 2012, Avcorp won a $500-million contract to build the folding outboard wing assemblies for the C variant of the F-35.

To date, the B.C. firm has delivered 94 sets of those seven-foot-long assemblies that compose the end of a wing and fold up to create more space when stored on an aircraft carrier. Avcorp is producing about 30 sets a year and has 300 more to deliver.

Lockheed Martin has multiple suppliers for the F-35 program, meaning Avcorp had to be particularly competitive in order to secure the deal, according to Kaler.

If Canada decided not to move forward with F-35 program, there would have been significant pressure on Lockheed Martin to award future contracts to other countries buying the stealth fighters. 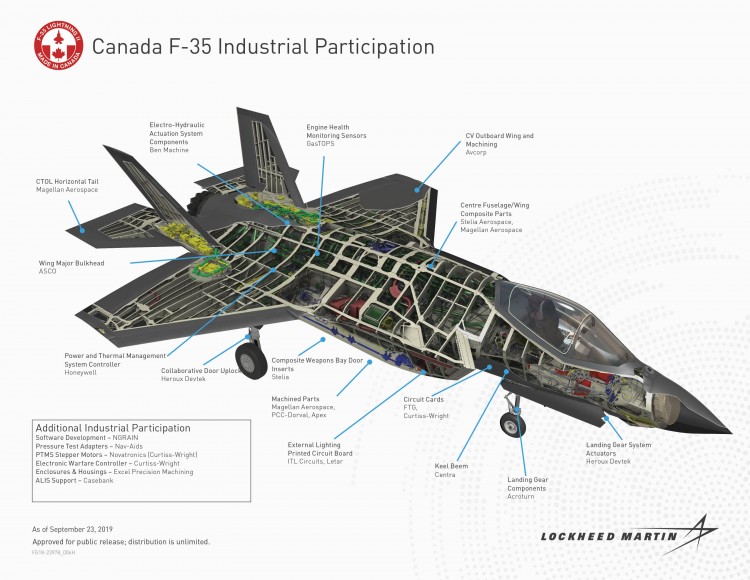 
Ottawa and Washington, D.C., are still in final negotiations over the deal. And while the deal for the F-35A jets doesn’t affect Avcorp’s manufacturing of the F-35C wing assemblies, Kaler said finalizing the deal will help future growth.

In the decades to come, he estimates that the F-35 program could ultimately be worth between $750 million and $1 billion for the company employing 480 workers in Canada, including 375 in B.C.

“The cost has come down significantly on the aircraft and I think everybody's on that pursuit, continuing to make sure that it's an affordable aircraft,” Kaler said. “If the aircraft is not affordable, nobody's going to buy it and there's no program.”

The federal government also gave Avcorp a bit of a boost earlier this week. It announced Wednesday it was providing the company $4.8 million towards investments in software to help it transition from a reliance on physical paperwork that tracks raw materials needed for its products as well as where those final products are at in their respective lifecycles.

“That feedback loop gets shortened with having that capability [to track digitally],” Kaler told BIV following a series of panels in downtown Vancouver Thursday at the Aerospace, Defence and Security Expo (ADSE).

“We're going to link to that system back to our customers as well. The customer will have visibility on the capacity and the demand so that … they can basically put in what their demand is [and] go through the filters so that we can continue to reduce our costs that way.”

Avcorp is procuring some of the software and developing some of it in-house.

During one ADSE panel, the CEO estimated more than 50 per cent of the company’s revenue “the last couple years” has come from the F-35 program.

In addition to the F-35 program, Avcorp also provides components and repair services for Boeing Co.’s (NYSE:BA) 737, 777 and 787 commercial aircrafts.