Map: Here are the cheapest neighbourhoods to rent in Metro Vancouver this August

If you're hoping to score a sweet deal on apartments for rent this August, you might want to look outside of the big city.

While there are several perks to living in Vancouver (the breathtaking vistas from the seawall, the vast selection of restaurants, and the unique music and entertainment venues — just to name a few), the cost of living continues to rise, particularly when it comes to rental prices.

The average cost of an unfurnished, one-bedroom apartment has increased by $147 across the Metro Vancouver region in August 2022, according to Liv.rent's latest rent report.

The rental platform says prices rose from $2,029 in July to $2,176 in August. Prices saw a slight decline in the previous month, falling $27 from June. Before that, however, average rental costs increased across the region from March through June.

But the City of Vancouver saw significantly higher prices this August.

With this in mind, there are several other neighbourhoods in municipalities across the Metro Vancouver region that cost significantly less.

The cheapest Metro Vancouver neighbourhoods for rental housing in August 2022

In August 2022, folks looking to get the best bang for their buck should head to Surrey, which dominates the top five cheapest neighbourhoods. For instance, the average price for an unfurnished one-bedroom apartment in Fleetwood was $1,442, which is a whopping $1,056 less than rentals in Vancouver.

Abbotsford accommodations are only slightly more expensive, with prices averaging $1,484.

Two Surrey neighbourhoods, South Surrey at $1,600 and Guilford at $1,654, rounded out the top five least expensive places to rent in the region.

Locals looking for affordable Vancouver rent should head to Renfrew, where listings averaged $1,869 this month. 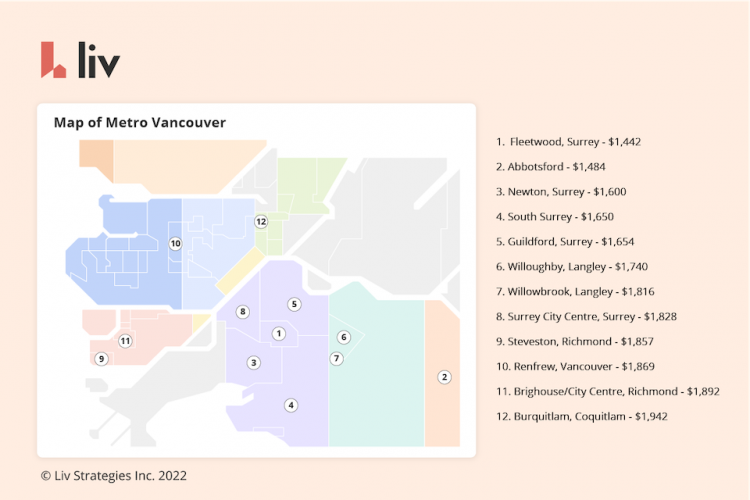