What is silvopasture and why is B.C.'s agriculture ministry teaching it?

David Haywood-Farmer’s ranch got smoky around this time last year. A wildfire tore through his ranch in Savona, B.C. — just outside of Kamloops — destroying critical infrastructure he depends on to keep his herd of over 1,000 cows safe.

But amidst the many parts of his ranch singed by flame, one part stands out as untouched by the blaze. Those paddocks are where Haywood-Farmer, who’s been working the land since 1977, employs the practice of silvopasture.

Silvopasture is the practice of having trees or shrubs live in tandem with livestock in pastures and on grazing lands, according to Farmers for Climate Solutions. This organization identified the practice in its agricultural policy framework, released in July to guide Canadian farmers to a more sustainable future.

More locally, silvopasture is the focus of a Five-Year Knowledge Transfer Plan currently being developed by B.C.’s Ministry of Agriculture and Food to better educate farmers, ranchers and agrologists on the practice.

Haywood-Farmer first introduced the practice because he was frustrated with how the grass growth beneath a canopy of interior Douglas firs was lagging in his paddocks. By integrating some logging practices into his ranch operations, he has been able to improve the health of the grass his cows graze on and mitigate wildfire risk simultaneously.

“We've done some logging practices within those [paddocks] to not take the whole canopy of timber, but just take out a mosaic of ages of timber,” he said. “What we're doing is filtering the light getting down to the grass at the bases of the trees to have the grass grow.”

Despite fire mitigation not being his original motivation to employ the practice, Haywood-Farmer said when the flames reached his ranch last year these silvopastures were key in prevention.

“It actually did get to the edges of [the silvopastures] and we didn't get the fire coming through them,” he said. “It did actually work as a buffer to the fire because it took a bunch of the timber component out so [the fire] didn’t go as fast.”

Of the 45 years that Haywood-Farmer has been working the land since he got out of university, he only harvested the timber for the first time eight years ago. He’s still praising its success.

“Very, very, very happy with the results. I'm happy with the way the timber has stood up to the harvest and there’s no fall down of the [remaining] firs,” Haywood-Farmer said.

“Every portion of it. I'm just so impressed with it.” 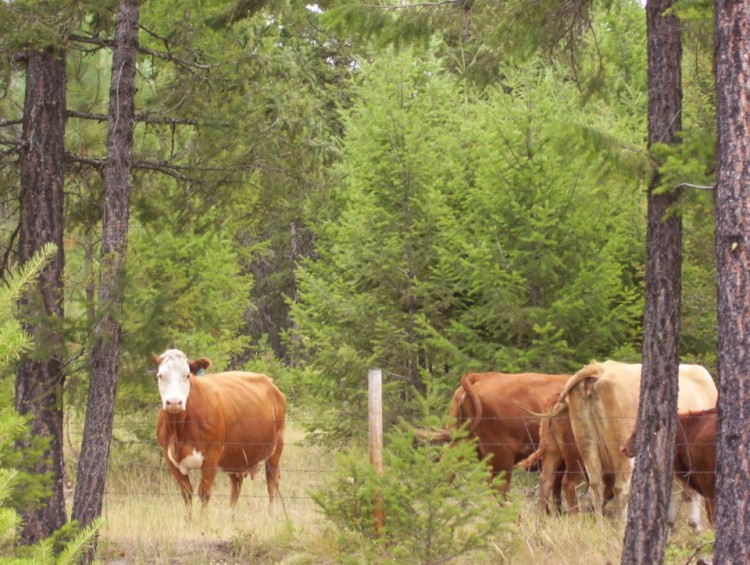 This benefit of the practice is one that other ranchers are depending upon, with memories of the 2021 wildfires that displaced at least 32,882 British Columbians and wreaked havoc across much of the Interior, including Haywood-Farmer’s ranch.

Werner Stump lives on a second-generation ranch in Malakwa, B.C., with his wife, Jody, and their three children. Last year they had five major fires within 15 kilometres of their ranch and a couple of smaller ones that made their way onto their range.

There was a fire in every direction he looked, Stump recalls, made even more noticeable by the great big plumes of smoke hovering above the surrounding lands.

“In the history of our areas, in most areas in B.C., it's pretty hard pressed to find an area that isn't impacted by fire,” Stump said.

His family has had a licence to graze their animals on Crown land for well over 50 years now, Stump said, similar to many other ranchers in B.C.

Now a critical part of his wildfire mitigation plan, Stump said he began integrating silvopastures onto his ranch for similar reasons to Haywood-Farmer — he needed more feed for his livestock.

“The problem is that… 100 years ago, there used to be many more grasslands than there are now and the forest used to be, typically, much more open with a grassland component underneath,” Stump said.

Over time, Stump says this shift towards more timber has meant less and less feed for his livestock, which led him to question whether the Crown land he was leasing was even usable for grazing anymore.

“That's how we got on to the silvopasture management system. It was forced upon us and we said, ‘OK, we need to do something.’”

“That's one of the things about silvopasture that we appreciate and that seems to work well in that scenario of public lands,” Stump said. “We can support multiple values on the same land base.”

Agrologist George Powell is part of the team working on the silvopasture knowledge plan to better educate B.C.’s agricultural industry on the practice. Like Stump, he says one of the large benefits is its marriage of multiple industries.

“The wonderful part about it is it's a wildfire mitigation tool that generates revenue,” Powell said.

“You're producing livestock, you're selectively producing timber and also getting the wildfire mitigation benefits at the same time.” 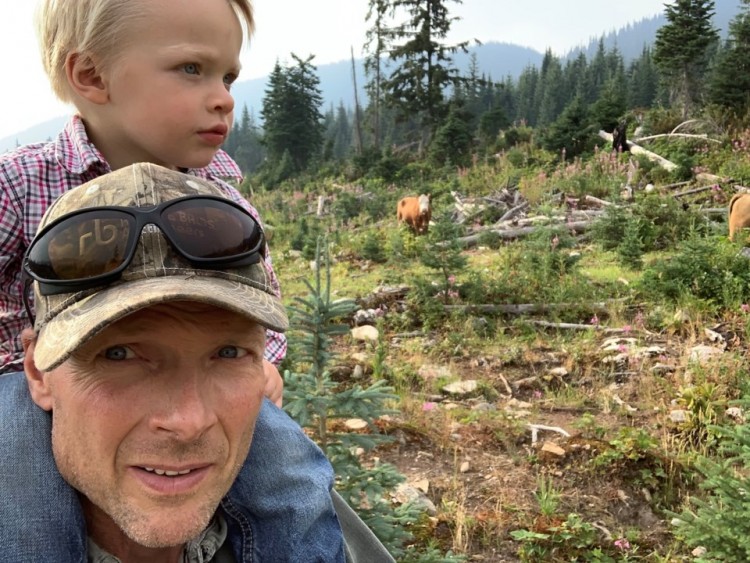 Rancher Werner Stump and his son check grass and tree stock in one of their silvopastures on their Yard Creek Range Agreement Area land in Malakwa, B.C. | Crystal Lake Ranch

To begin silvopasturing, Powell says how you start depends on what you’ve got.

“If you're starting from intact forest, or [have] mature timber and shrubs to work from, you can shape that into a silvopasture and see the benefits almost immediately,” he said.

But if you're starting state is a cultivated field or pasture, Powell says even with the fastest growing hybrid trees and shrubs, the wait time can be a sizable roadblock.

“You're going to be looking at like a seven- to 10-year lag before you start to see meaningful benefits out of that mixture,” he said.

Or, if someone chooses to plant native species instead, to emphasize the timber component, it could be 60 to 80 years before those trees reach maturation and a silvopasture emerges.

“Your grandkids will be quite happy with you,” Powell said. “But you're not necessarily going to see those benefits accrue in a really short time period.”

However, with the long-term value that maturing trees can add to a ranch or farm, Powell says almost all producers would benefit from implementing the practice.

“It's recognizing that the value that trees and shrubs have as a component on the ranch, is embedded value that should add to the value of the property as it goes on,” Powell said.

If silvopasture became more mainstream across Canada’s agricultural sector, a total of 460 billion kilograms of carbon emissions could be mitigated by 2050, according to an article in Science Advances.

Silvopasture and other practices that involve planting additional trees such as forest restoration, urban canopy cover or riparian tree planting, could all have huge implications for the capturing of carbon emissions, the article states.

To ranchers with herds of cattle, Powell says this presents the potential to offset methane emissions from their cattle through the carbon-capture capabilities of their trees and shrubs.

Another study, published last year in the Journal of Forestry states that silvopasture can lead to better forage, healthier soils, reduced climatic stress on livestock and expanded grazing.

The study’s authors state that through their findings they aim to dispel what they describe as a long-lasting belief among foresters that livestock and trees do not mix.

According to Powell, that belief simply does not ring true. He says mixing livestock and trees can lead to big climate adaptation benefits such as soil moisture conservation and shelter for livestock.

In circumstances of episodic drought, a common occurrence in the Interior, Powell says silvopastures can preserve ground vegetation by filtering sunlight and preventing major water runoff with their complex root systems.

Following last year’s heat dome, Powell says many people’s eyes have been opened up to the benefits of silvopasture in extreme temperatures.

“Livestock were looking for any shade they could find,” he said. “Strategically, having silvopastures intermix with other pasture zones is really a good practice in providing some animal welfare benefits.”

In the colder temperatures, Powell added, trees become pools of radiant heat due to their large water content and absorption of sunlight during the day. Therefore, animals can also seek thermal cover in silvopastures.

As an emissions mitigation measure, Powell says he doesn’t necessarily recommend silvopasture be used purely for this because he doesn’t want people afforesting agricultural land to gain carbon credits. He also wants to make sure farmland’s role in feeding humans is not forgotten.

“[Silvopasture is] something that's net positive in terms of adapting and diversifying our agricultural practices and at the same time helping to mitigate climate change,” he said. 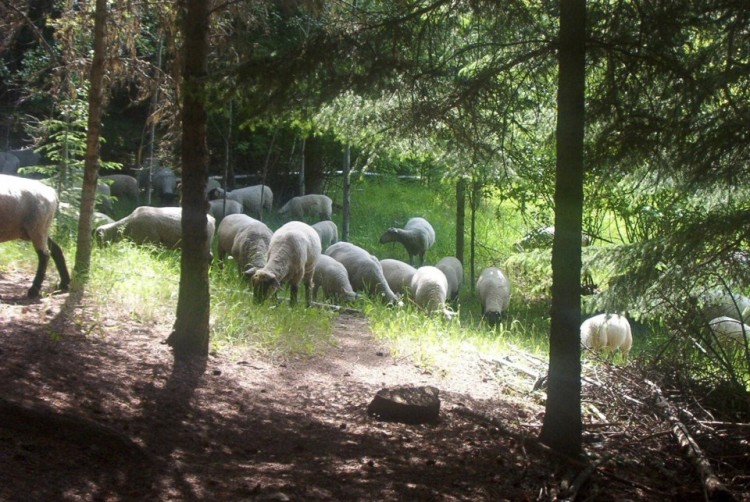 Why hasn’t it caught on yet?

With little information available on the topic, Powell says many ranchers or farmers who are interested in the practice simply don’t have the resources to pull it off.

“We're really not at the stage where we can hand over a production guide, and say, ‘Here's the how-to,’” he said.

“We can show general principles of developing, design and operation, but the producer really does have to do a little bit of trial and error, and be DIY-focused.”

Stump said he was aware of the practice mainly because of his experience as a professional forester, alongside his ranching operation.

“I've seen both ends and because I have experience on both sides, I guess I probably was watching for examples [of silvopasture] more closely than some people would ordinarily do,” Stump said.

Silvopasture also isn’t a new concept, Stump added. Once someone starts looking for examples, he says it’s not hard to trace it back to much earlier times.

“It has roots in the traditional practices Indigenous people have using fire to manipulate forest cover,” Powell says. “And one of the reasons they did that was to improve the grazing opportunities for wildlife.”

In B.C., Stump thinks a focus on timberland management prevents many from experimenting with the technique out of fear that it may jeopardize their timber crops.

“Because of a lack of information or lack of experience with the practice, they're concerned that they may be… introducing a competing crop,” he said, “instead of looking at it like a synergistic opportunity where the two can coexist together quite nicely.”

The biggest hurdle, according to Stump, is gaining traction and trust with people to help them understand the benefits to these two industries coexisting on the same land.

This is where the knowledge plan that Powell is working on aims to break some ground.

“What we're trying to do right now, systematically, is reach out to producers and professionals who support producers… and ask them, ‘What are your priorities for this topic? And what do you need in terms of new supports?’” he said.

After an extensive review of the past 20 years of silvopasture reports in B.C. and beyond, Powell said they now have two surveys underway — one for producers and one for professional support people.

Powell has also been conducting interviews to get a more in-depth understanding of the thought process of those surveyed.

Next, a number of invites will be sent out asking stakeholders to attend a series of focus groups on the topic.

By the end of this year, Powell says a final list of recommendations will be given to the ministry to go forth into their next five years of knowledge transfer about silvopasture.

While he says it’s all still very preliminary, the number one thing that’s jumping out at him so far is just how many people are starting from zero in terms of their silvopasture knowledge.

“About 90 per cent of people are identifying just the need for some basic workshop education on the topic,” Powell said.

Stump says he hopes this knowledge plan can lead to a broader change in provincial legislation that he says ties the hands of timber companies, preventing them from being flexible with their land.

“I'm just hoping that we can create some awareness on how the silvopasture management system can be good for both timber and forage,” Stump said, “thereby creating a bigger pie instead of just trying to slice the pie up in amongst different end users.”