By Tyler Orton | September 15, 2022
Avcorp CEO Amandeep Kaler says the F-35 program could be worth up to a $1 billion for his company if Ottawa can finalize its order of 88 stealth fighters from Lockheed Martin | Chung Chow, BIV

Even before the pandemic brought commercial air travel to a screeching halt two years ago, Kevin Russell recalls his company, Asco Aerospace Canada Ltd., facing “massive, massive drops in revenue” amid a global crisis afflicting much of the industry.

The Canadian division of the multinational aerospace firm manufactures the wing ribs for the Boeing Co. (NYSE:BA) 737 Max. Soon after that aircraft was temporarily grounded following deadly crashes (unrelated to Asco’s manufacturing) that killed hundreds in 2018 and 2019, Asco’s bottom line was pummelled again, this time by COVID-19.

“During the pandemic, we couldn’t see the light,” said Russell, vice-president and general manager of Asco’s operations in Delta, which employs about 100 people.

The saving grace during that period was Asco’s military contracts, specifically for Lockheed Martin Corp.’s (NYSE:LMT) F-35 stealth fighters, for which the B.C. team manufactures the bulkheads.

“That was sort of our lifeline,” said Russell.

Flash forward to summer 2022 and commercial air travel is surging, 737 Max aircraft have returned to the skies following a green light from regulators and Ottawa has made further commitments to the F-35 program following years of dithering. Things are looking up for B.C. aerospace.

“The industry was in pretty rough shape” at the outset of the pandemic, according to Mike Mueller, president and CEO of the Aerospace Industries Association of Canada (AIAC).

Immediately prior to the pandemic, the B.C. aerospace industry was composed of more than 200 companies employing more than 9,000 British Columbians directly while generating $1.8 billion in annual revenue, according AIAC data from 2019.

Mueller said about 25,000 jobs were lost nationally in 2020 and another 7,000 the following year, but that the industry is now building up its workforce again amid stronger demand for air travel.

“The one bright spot we saw was on the defence side because government kept defence contracts moving forward,” he said.

Asco was able to retain many of its workers through the Canada Emergency Response Benefit program, and Russell said he plans to boost the company’s headcount by about 20 per cent in the next 12 months.

“Like everybody else, we are hiring,” said Amandeep Kaler, CEO of Avcorp Industries Inc. (TSX:AVP), which is located close to Asco’s manufacturing plant in Delta. “If we can find another 20 people, we’ll take them today. We’re all in.”

Avcorp also manufactures components for the F-35 fighters: The folding outboard wing assemblies for the F-35C variant of the fighters the U.S. Marine Corps uses on aircraft carriers. To date, it has delivered 94 sets of those seven-foot-long assemblies that compose the end of a wing, folding up to create more space when stored on an aircraft carrier. Avcorp is producing about 30 sets a year and is currently set to deliver 300 more. 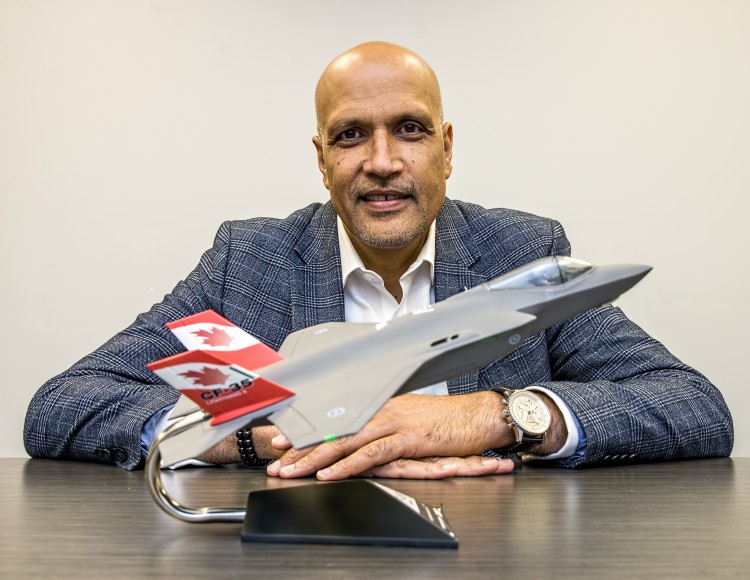 
In addition to the F-35 program, Avcorp provides components and repair services for Boeing’s 737, 777 and 787 commercial aircraft.

The first vendors tapped for the F-35 program about a decade ago were all partner countries that were also ordering the same stealth fighters, including Australia, Canada, Italy, the U.K. and the U.S.

But Asco’s and Avcorp’s continued involvement in the program became uncertain when the federal Liberals promised to scrap plans to procure the stealth fighters when they formed government in 2015.

Earlier this year, Ottawa reversed that promise and announced it was ordering 88 of Lockheed Martin’s F-35A fighters.

Had Canada decided not to move forward with F-35 program, there would have been significant pressure on Lockheed Martin to award future contracts to other countries buying the stealth fighters. Final negotiations are still underway but are expected to close by year’s end.

While the deal for the F-35A jets doesn’t affect Avcorp’s manufacturing of the F-35C wing assemblies, Kaler said finalizing the deal will help future growth.

In the coming decades, he estimated that the F-35 program could ultimately be worth between $750 million and $1 billion for the company employing 480 workers in Canada, including 375 in B.C.

“The cost has come down significantly on the aircraft, and I think everybody’s on that pursuit, continuing to make sure that it’s an affordable aircraft,” said Kaler, who recently shepherded Avcorp’s deal to be acquired by French aerospace firm Latécoère SA for about $41 million. “If the aircraft is not affordable, nobody’s going to buy it, and there’s no program.”

Russell said the dollar value of manufacturing the F-35 bulkheads – the fighter’s single largest part, of which Asco has produced 600 to date – is in the “multimillions” each year.

B.C. Innovation Minister Ravi Kahlon, the MLA representing Delta North, said he’s hoping for some progress between Ottawa and Lockheed Martin over the purchase of the fighters.

“There’s positive opportunities there,” he said, regarding the potential for more collaboration between the aerospace industry in B.C. and Washington state. “But again, we need to first get that [F-35] agreement in place.”

Echoing Kahlon, Mueller said B.C. is positioned well for growth owing to its proximity to Washington state, one of the world’s largest aerospace hubs.

He added that one of the big challenges ahead will be ensuring there’s enough labour to meet demand.

“We’re pretty optimistic as we’re coming out of the pandemic,” Mueller said. “We are seeing commercial traffic coming back, which is great, and British Columbia in particular is well positioned because a large part of the industry is the maintenance, repair and overhaul side, [which has recovered] a little bit quicker than the other sectors of the aerospace industry.”