This breathtaking B.C. town ranked #3 on a list of the world's best surfing spots

By Elana Shepert, Vancouver Is Awesome | September 23, 2022, 12:30pm
With some of the best beaches in the world, Tofino was included in a list of the best surfing spots, including ones in Mexico, Bali, Australia, and more | Photo: Kevin van der Leek Photography/Moment/Getty Images

A popular B.C. town has been included in a list of the world's top surfing destinations.

Online travel company ParkSleepFly analyzed surfing spots across the globe to find the best places for fans of the water sport. They based their ranking on several factors, including Google searches, Instagram tags, coastline length, and average sea temperatures to reveal the best surfing spots around the world.

Puerto Escondido in Oaxaca, Mexico, claimed the top spot on the list, and was lauded for its being located in a "laid-back coastal region" that is "home to one of the world’s most thrilling waves, making the surfing spot perfect for expert surfers." In total, the popular destination appeared in over 3,000 tags on Instagram and 6,120 monthly Google searches.

Located on Australia's breathtaking sunshine coast, Noosa, Queensland clinched the runner-up spot in the rankings. Described as the "perfect spot to take to the waves," the town "has waves for all levels" and "a total of 69 surf breaks." On Instagram, it has over a whopping 16,000 tags.

Surfing Tofino to Uluwatu, Bali and around the world

Coined the surfing capital of Canada, Tofino landed third on the list. With a "range of surf breaks with varying difficulty levels," the town's myriad beaches are described as "perfect for beginners and avid surfers alike."  On Instagram, surfing in Tofino has been tagged more than 700,000 times.

Time Magazine recently included the popular Vancouver Island town in a list of the 50 greatest destinations to visit in 2022. Long Beach was also included in a ranking of the world's best beaches. As the longest and largest stretch of beach in the Pacific Rim National Park Reserve, the breathtaking shore spans a whopping 10 kilometres. It is part of three sections of the park, between Ucluelet and Tofino.

Uluwatu in Bali, Indonesia is the world’s most searched-for surfing spot "with over 10,000 monthly searches over the past 12 months."

Report authors note that the United States' top surfing spot is Florida's Cocoa Beach, with a surfing spot score of 8.32 out of 10. 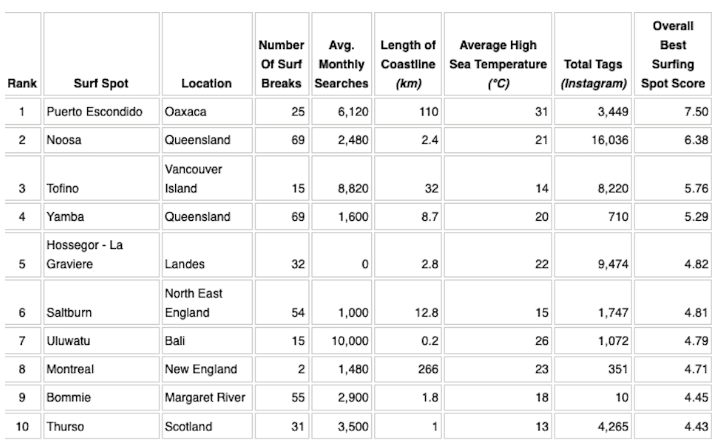