By Bob Mackin | September 2, 2022, 1:51pm
A photo of the June 8 incident in Richmond, received through freedom on information from the Ministry of Transportation and Infrastructure | Submitted

The oversized load hauled by a Coquitlam trucking company on June 8 was more than half a metre higher than maximum height at the Cambie Road highway overpass in Richmond.

Ministry of Transportation and Infrastructure files, released under freedom of information, offer new details about the incident involving J.T. Business Development’s Kenworth tractor unit, Felling trailer and an excavator that became wedged under the structure and crushed part of a pickup truck.

Harley Anfinson, president of J.T., which does business as J.T. Hotshotting, was not available. But an email from the company said: “Upon legal advice from the company attorney, we are speaking only with the necessary authorities and insurance companies involved.”

Loose concrete and broken or disconnected cables and bars were removed. Plywood sheets were installed on the north face of the girder to reduce the risk of visual distraction.

“Given the extent of the impact damage to girder 1, we do not believe that repairs are practical and would recommend that the Ministry consider replacing this girder,” said the report. "The Ministry may also consider localized patching of the bottom flanges in girders 3, 4 and 5 to restore concrete cover.”

The June 8 crash was the highest-profile case among several similar crashes since April that caused major infrastructure and equipment damage, and lengthy traffic jams.

An excavator on a low-bed trailer hauled by Neil Smith Construction Ltd. of Delta was destroyed in a July 12 crash involving the company’s 2019 Western Star dump truck and 2023 BWS trailer at the 192 Street overpass on Highway 1 in Surrey. 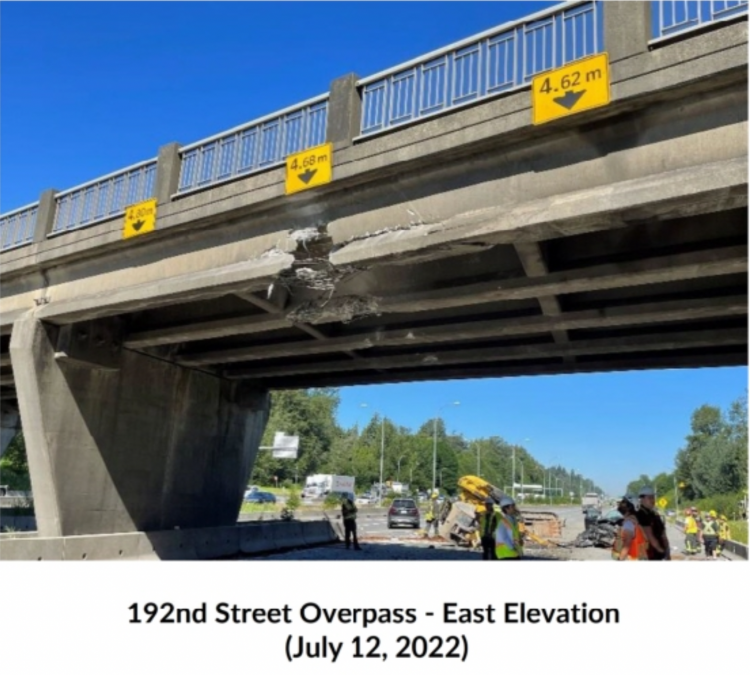 A photo of the July 12 incident, received through freedom on information from the Ministry of Transportation and Infrastructure | Submitted

An employee of the company, who only identified himself as Dennis, estimated $300,000 in equipment damage. He declined to answer questions about whether the driver remains with the company.

“It's under investigation. So I'm not going to say much more,” he said.

Three passenger vehicles were also damaged, including a Jeep SUV. One person was taken to hospital by ambulance with serious injuries, according to ministry emails. Commercial Vehicle and Safety Enforcement (CVSE) wrote a violation ticket for insecure cargo (a fine of $288) and “dimensions of load do not conform” ($115).

Associated Engineering recommended replacement of a girder on span 5 and suggested the ministry consider patching and minor repairs to three other girders.

Chilliwack-based Triahn Enterprises’s 2020 Kenworth dump truck and 2014 Cross Country trailer were involved in the June 23 crash on Highway 1 at the 232nd overpass in Langley.

“We understand this structure is due for replacement within a few years and recommend removing the damaged girder and replacing it with a steel girder for scheduling, erectability and cost-effectiveness,” said Associated Engineering’s report. The ministry initially estimated a $1 million repair cost.

Another crash happened at the same overpass, almost two months earlier on April 26, when a 2008 Peterbilt registered to Key-West Asphalt (333) Ltd. of Abbotsford struck the structure before 4 a.m., wedging the dump truck’s box. 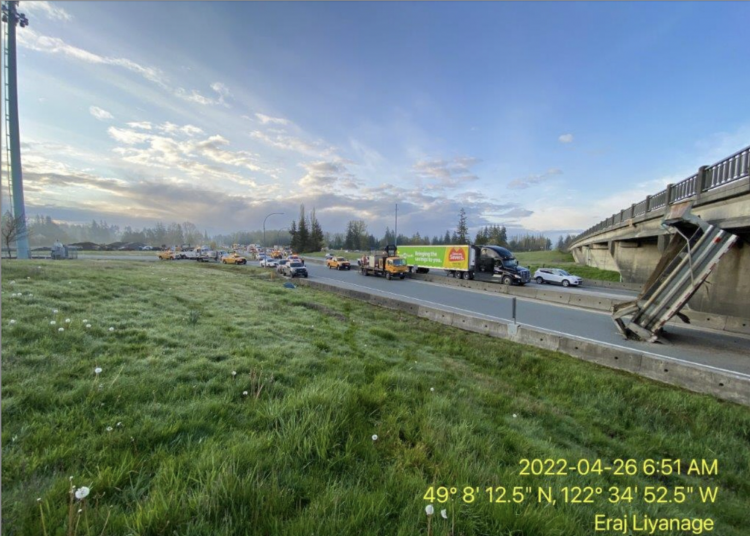 A photo of another overpass incident in Langley, received through freedom on information from the Ministry of Transportation and Infrastructure | Submitted

The Ministry of Transportation and Infrastructure said the Cambie Road and 232nd overpasses continue to have partial lane closures until repairs are completed. Drivers received violation tickets from the RCMP and CVSE. CVSE will also complete audits of both carriers, the ministry said.

In July, CVSE reacted to the series of crashes by publishing a list of carriers cancelled for cause. It also maintains a height clearance tool on the DriveBC website for truckers to plan routes that avoid structures and other hazards with height or width restrictions. The mapping program was briefly offline last November to update software and correct errors.