Supporters of a society that registered during the 2021 federal election campaign to encourage Chinese-Canadians to vote campaigned with the Liberal candidate who upset the Conservative incumbent in the controversial Steveston-Richmond East race a year ago.

“There's been unprovoked attacks, discrimination and racism we’re not going to accept,” Bains told the group in Garry Point Park, near Conservative Kenny Chiu’s constituency office. “The Liberal Party of Canada is about inclusion. We're here for everyone and my understanding is that this community specifically doesn't have somebody who's been a strong voice in representing them for a long time.” 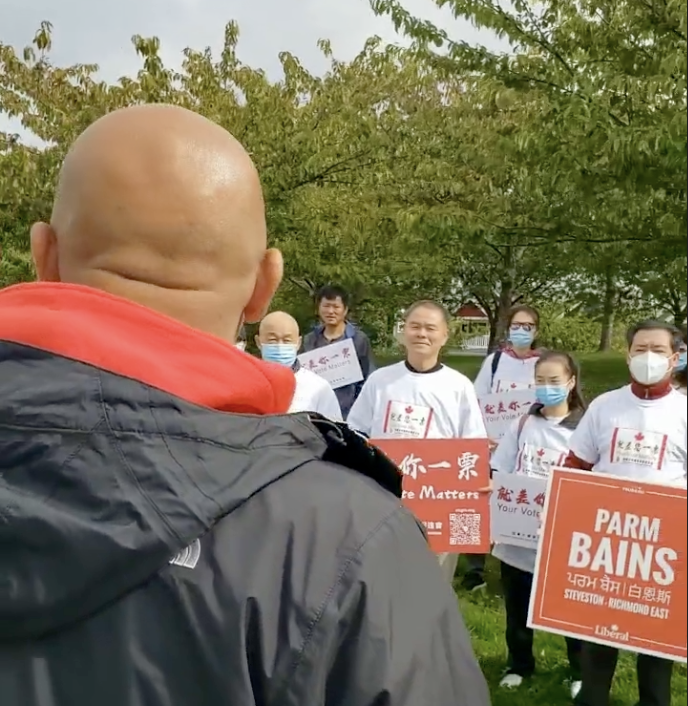 “I am not surprised by what you found,” Chiu said in an interview. “And I think Mr. Parm Bains is just a puppet these pro-CCP elements are using now.”

Hong Kong-born Chiu had been the target of a pro-Beijing disinformation campaign on Chinese social media, part of a larger effort against the Erin O’Toole-led Conservatives and their platform, which promised to ban Huawei from Canada’s 5G network and investigate the company’s role in surveillance of Uyghur Muslims in China’s Xinjiang region. A week before election day, an office at Global Affairs Canada detected anti-Conservative content from CCP-affiliated media accounts across Chinese social media platforms WeChat, Weibo and Douyin.

“The [Canadian Security Intelligence Service] have been reminding parliamentarians and reminding our political leaders for ages, that Russia, Iran and China are trying to influence Canada, and it should not have been partisan,” Chiu said.

In neighbouring Richmond Centre, Liberal newcomer Wilson Miao upset the thrice re-elected Conservative Alice Wong by just 772 votes, despite spending 56% less than Wong. People’s Party of Canada candidate James Hinton finished fifth with 748 votes. Had Hinton not split the right-wing vote, there could have been a judicial recount. A year later, Elections Canada said it has still not received Hinton’s campaign finance disclosure.

CCGVA was co-founded by Ivan Pak, “Ally” Wang Li and Daoping Bao, the week after Prime Minister Justin Trudeau called the snap election. Pak, a 2019 PPC candidate who endorsed Hinton’s candidacy, said CCGVA was not registered with Elections Canada as a third-party because it is non-partisan and does not favour a candidate or an issue. CCGVA’s Chinese-language website sought to identify eligible Chinese-speaking Canadian citizens and urged them to register and vote.

On Sept. 18, 2021, the Saturday before election day, CCGVA supporters campaigned at Richmond city centre shopping and transit hubs and in Steveston. Pak said CCGVA did not set-up the meeting with Bains. He said Wu Jiaming and Wang Dianqi were not part of CCGVA’s organization, just volunteers during last year’s campaign.

“We made it very clear to them that our organization, we're not supporting the candidates,” Pak said.

Alexander MacKenzie, aide to Bains, said the MP was unavailable for an interview due to recovery from a medical procedure. MacKenzie said Bains had been invited by the YoYo Hiking Club, but did not recognize Wu Jiaming or Wang Dianqi. “They had no role in my campaign,” Bains said by email.

Pak and Li hosted Bains and Mandarin-speaking Liberal Burnaby South candidate Brea Huang Sami for an interview on Rise Weekly’s YouTube channel during the federal election. MacKenzie said it was not a paid appearance and not part of the Bains campaign’s $945 magazine ad buy. Rise also featured a video interview with PPC leader Maxime Bernier, but not with Conservative or NDP candidates. Pak, who said he is a friend of Chiu, said Chiu was invited, but did not respond.

Chiu describes Pak as an acquaintance, “somebody that has my personal phone number,” but said he did not receive an invitation.

In August, at King George Park in Richmond, CCGVA kicked-off its campaign to encourage Chinese-Canadians to vote in the Oct. 15 municipal elections. Pak said CCGVA would engage in outreach events similar to 2021, closer to election day. In the meantime, Li hosts candidate interviews on the Vancouver Chinese Radio program on 550 KARI AM, a Blaine, Wash. Christian radio station that targets Metro Vancouver.