Phase 1 on track to ship LNG by mid-decade, phase 2 still up in the air

Western Canada has an abundance of natural gas, and Europe, especially Germany, could really use some right now.

But the only major liquefied natural gas export terminal under construction in Canada right now -- LNG Canada in Kitimat – is still two or three years away from shipping LNG, and it faces West and Asia, not East and Europe.

With an energy crisis threatening to plunge Europe into energy poverty and recession, Canadians are naturally inclined to want to help.

But the reality is that the only natural gas produced in Western Canada likely to make it to Europe will be through the U.S., which has seven operating LNG export terminals and another five under construction, though any LNG shipped from B.C. to Asia could free up volumes from other producers to go to Europe.

During a media site tour in Kitimat Wednesday, LNG Canada CEO Jason Klein provided a progress update on the $40 billion project, and fielded questions from reporters.

He was asked if the Kitimat terminal project is on budget and on schedule, whether there is any way the project could be sped up, and when a final investment decision might be made on phase 2, which would double export volumes from 14 million tonnes a year to 28 million.

Phase 1 of the project in Kitimat is now 70% complete, and the associated Coastal GasLink (CGL) pipeline is 75% complete, though over budget.

Earlier this year, TC Energy (TSX:TRP), which is building the natural gas pipeline from northeastern B.C. to Kitimat, announced the cost of building the pipeline has nearly doubled, from $6.6 billion to $11.2 billion.

The total budget for the LNG Canada project has been estimated at $40 billion, including the terminal in Kitimat, CGL and upstream natural gas assets. The cost of the terminal project in Kitimat has been widely reported to be $17 billion to $18 billion – a figure LNG Canada has never confirmed or corrected.

Asked if the terminal project itself is on time and on schedule, Klein suggested it was.

"The pipeline has had almost a 100% cost overrun," Klein said. "That's not our experience here. 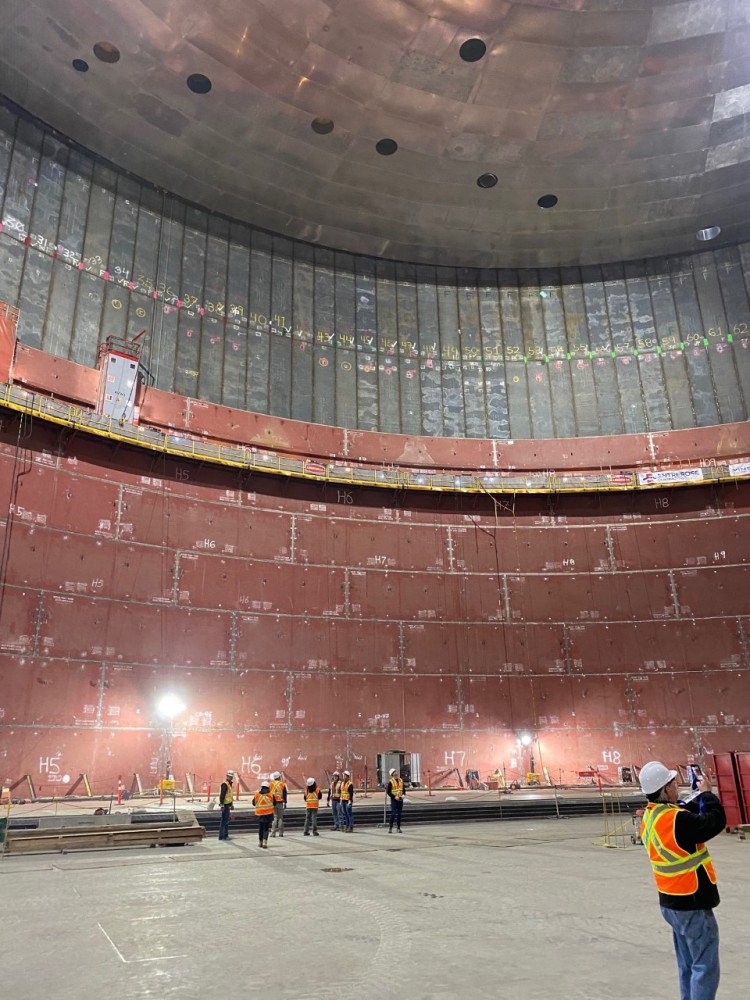 The prime contractor on the project is JGC Fluor. To date, $3.8 billion has been spent through local suppliers and contractors.

A total of 5,500 workers are currently employed at the site. Only 1% of the workforce are from outside of Canada, LNG Canada officials said.

They are housed in Cedar Valley Lodge, which can accommodate up 4,500 workers and has a complex with all the amenities of a town, including a Starbucks (the only one in Kitimat), a convenience store, basketball and squash courts, golf simulators, games rooms, a 200-metre running track, indoor rock-climbing wall, fitness centres, a pub, a yoga studio, and therapy dogs. 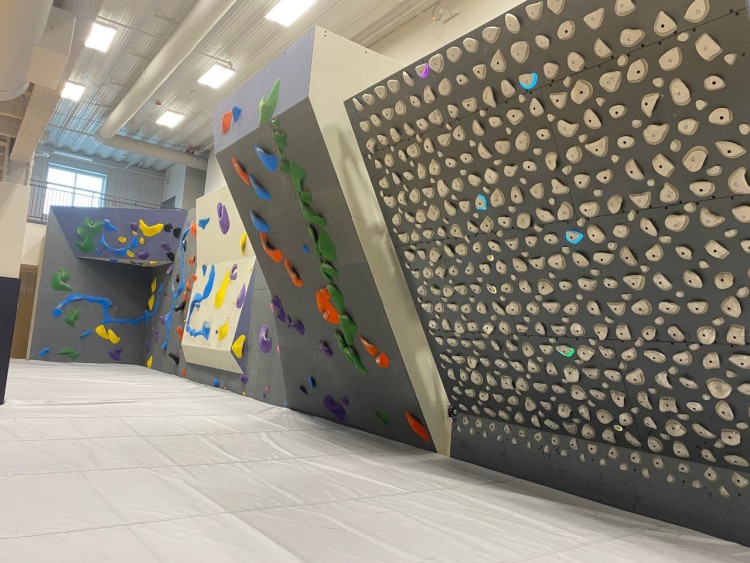 An indoor rock-climbing wall among amenities at Cedar Valley Lodge.

Significant progress was made this year, Klein said. At the beginning of the year, about the only major visible piece of infrastructure was a large LNG storage tank.

Since then, various modules from China, Italy and Indonesia have been arriving by ship "almost on a weekly basis," Klein said.

Some of the modules are monstrous processors, eight- to 10-storeys high, which remove impurities from natural gas before it can be chilled to minus 160 degrees Celsius to turn it into liquid. It takes several of these massive processing modules for each "train." Phase 1 calls for two trains.

By the middle of 2023, all the processing modules should be in place, and the workforce in Kitimat will ramp up to 7,500, Klein said. 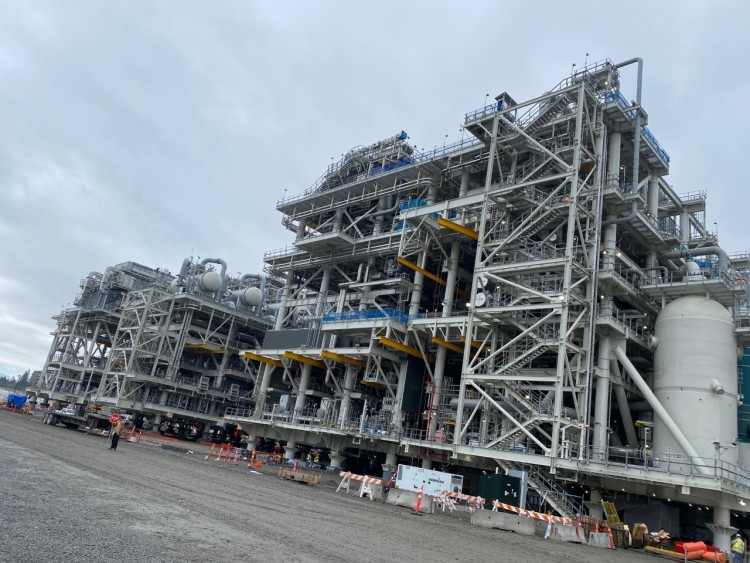 A mamoth LNG storage tank that’s 52-metres high, 92 metres in diameter and lined with a special nickel-steel alloy capable of withstanding minus 160 degrees Celsius temperatures is still being completed. It will store up to 225,000 cubic metres of liquefied natural gas. It will be the second largest LNG export storage tank in the world.

All of this – the massive processing modules and LNG storage tank – would need to be doubled, if the LNG Canada partners decide to sanction phase 2 of the project.

What’s being built now is a two-train project with an annual production and export capacity of 14 million tonnes of LNG per year. But the project from the outset was designed to go to four trains.

"Provided it remains competitive, and it fits with our JV (joint venture) partners portfolios and we make the right choices on technology, phase 2 looks very compelling.”

Asked when the LNG Canada partners might decide to sanction phase 2 with a final investment decision (FID), Klein said that depends on markets, the joint venture partners and government policymakers and regulators.

“It’s going to take all those people being aligned to get to phase 2 FID,” Klein said.

One barrier could be CleanBC, which places limits on emissions from industry. Phase 1 is accounted for in the CleanBC plan, Klein said, which suggests phase 2 isn’t.

Compared to other LNG producers, the LNG Canada project is expected to produce some of the lowest-carbon LNG in the world, partly due to the electrification of upstream natural gas production in northeastern B.C.

B.C. natural gas also has comparatively low methane emissions, partly due to regulations and best practices, like green completions, which requires methane from newly tapped wells to be captured, not vented. But there is pressure to lower the emissions intensity of LNG production even more by moving to electric drive, as some smaller projects, like Woodfibre LNG, plan to do.

Asked if it is possible that phase 2 could be built using electric-drive – in other words a hybrid system in which two trains are natural gas powered and two powered by clean hydro power – Klein said it’s technically feasible.

The problem with going electric is not the capital cost, Klein said, but the operating costs, due to the massive amounts of electricity that would be needed.

The power demand of the LNG Canada terminal is already 600 megawatts (MW), and going to e-drive might require up to another 600 MW, Klein said. In other words, it could take the entire capacity of Site C dam to run a hybrid system.

“It’s more of an operating cost question, and that’s something we will evaluate,” Klein said.

As for phase 1, Klein said the economics look good.

Whether LNG from Canada will ever make it to Europe, Klein suggested it's more likely that cargoes that currently go to Asia from other producing countries, like the U.S. or Australia, could end up displaced.

"When we put 14 million tonnes into Asia, that’s going to going to free up 14 million tonnes that’s currently coming from Australia or the Middle East into Asia and free those cargoes up to go around the world," Klein said. “I’m a firm believer that every cargo we put into Asia frees up a cargo somewhere else to go to Europe.”

Is there a long-term market?

One consideration in sanctioning phase 2 is whether there is a long-term market for LNG. Most energy analysts say there is, especially in Asia, which is the market LNG Canada would mainly serve.

“In my view the case for Canadian LNG is really strong," Klein said.

Decarbonization efforts around the world have led to questions about just how long the "bridge fuel" that is natural gas will have to be. It was expected demand for LNG would eventually begin to decline in Europe, as it moves more towards renewables, hydrogen and nuclear power.

But energy markets are now in turmoil because of the war in Ukraine, which has resulted in Europe losing access to a lot of Russian natural gas, and scrambling for alternatives. One immediate alternative has been increased use of coal power in both Europe and Asia, as a result of insufficient LNG volumes. Longer term, Europe is seeking alternative supplies of LNG and trying to reduce its reliance on fossil fuels altogether by switching more rapidly to renewables and hydrogen.

It's Asia where the biggest long-term demand is expected to develop.

In 2021, China surpassed Japan as the world's largest buyer of LNG at 79 million tonnes, though Chinese imports are expected to fall this year due to an economic contraction there.

Royal Dutch Shell forecasts Asia will absorb 70% of LNG demand growth out to 2040, with some of that demand driven by fuel switching from coal to natural gas, which has 50% the carbon intensity of coal when used to generate power, according to the Intergovernmental Panel on Climate Change.

Switching just 20% of coal power in Asia to natural gas could reduce emissions by 680 million tonnes of CO2 equivalent per year, Shell estimates.

"Gas is the only fossil fuel that is expected to grow continuously to 2035," McKinsey said in a 2019 forecast. It forecasts demand for LNG demand will grow by 3.4% annually to 2035, then start slowing.

"LNG demand growth will slow markedly but will still grow by 0.5% (annually) from 2035 to 2050, with more than 200 million tonnes of new capacity required by 2050," the McKinsey report forecasts.

LNG developers in Canada are at a serious disadvantage compared to the U.S, where the barrier to entry is much lower, Klein said. One advantage Canada has is an abundance of natural gas in Western Canada, as well as abundant clean power to help lower its emissions intensity.

“What you also have to look at is the LNG projects that are producing today that are already in decline,” Klein said. “There’s a lot of LNG projects around the world that will be tailing off soon because they’re on reservoirs that are in natural decline.”