A coalition representing two million British Columbians has handed the B.C. government a failing grade in six out of 10 indicators on climate action.

By Stefan Labbé, Glacier Media | October 28, 2022, 8:55am
Volunteers in Abbotsford as young as 10 came together to help shovel sandbags for their neighbours after floodwaters drove over 1,100 people from Sumas Prairie, Nov. 16, 2021. The same year record floods caused massive destruction and suffering across much of B.C., a new report card says the province is failing to keep up with climate change. | Stefan Labbé/Glacier Media

The B.C. government has received an ‘F’ in a report card gauging the success of its actions to confront a changing climate.

The report card comes more than a year after 200 groups signed a letter outlining 10 urgent climate actions the B.C. government needed to accelerate.

On Thursday, the coalition — which has since grown to more than 450 groups with a membership equivalent to half of B.C.’s population — released a progress report claiming the province has failed in six out of 10 priorities.

“British Columbia is not on track to confront the climate emergency,” said Tracey Saxby, a marine scientist and executive director for the grassroots environmental organization and signatory My Sea to Sky.

“We are not living within sustainable limits to ensure we’re not going to keep warming beyond 1.5 Celsius.”

A spokesperson for the Ministry of Environment and Climate Change Strategy pushed back against the report’s findings, stating the province’s CleanBC Roadmap to 2030 “is one the strongest climate plans on the continent.”

“We disagree with the conclusions of the report,” said the ministry spokesperson in an email.

“There is more work to do, but we’ve made substantial progress and will continue [to] strengthen the plan over time to ensure we’re meeting our commitments.”

By taking “no substantive policies or actions,” the coalition alleges the government has failed in the following six areas:

For its part in reducing global emissions and keeping temperatures below 1.5 C, the B.C. government said last year it would reduce emissions in the province to 40 per cent below 2007 levels by 2030.

But hitting that target would require B.C. to lower its carbon output by about 7.5 per cent every year. So far, the province has either missed or overturned every emissions target it has set for itself.

The ministry spokesperson said the government is taking actions across several sectors “to significantly reduce emissions, meet our emissions targets, and build a better future for everyone.”

He pointed to plans to cut methane emissions 75 per cent by 2030, while aiming to have zero-emission vehicles make up 90 per cent of all new vehicles that same year.

2) Invest in a zero-emissions economy - FAIL

The coalition points to former World Bank economist Nicholas Stern’s recommendation that governments should spend two per cent of their GDP on mitigating the effects of climate change.

That would mean spending $6 billion a year, five-fold more than the $1.2 billion the province dedicated this year in its budget to reduce emissions under the its CleanBC plan.

3) Rapidly wind down all fossil fuel production and use - FAIL

The progress report fails the government for failing to stop new fossil fuel infrastructure as recommended by the International Energy Agency in 2021.

Other reasons for the failing grade: the government has no plans to phase out existing fossil fuel infrastructure or utilities, and has instead focused on “false solutions” like blue hydrogen; renewable gas; carbon capture, utilization and storage; carbon offsets; and LNG as a marine fuel, claims the report.

At the federal level, Ottawa has committed to protect 30 per cent of terrestrial and marine ecosystems by 2030. As of 2022, B.C. has protected only 15.5 per cent of its land base and 3.2 per cent of its oceans.

And while the B.C. government has made some progress working with First Nations to further conservation, the report claims it has failed to halt deforestation and failed to create a plan to cut carbon emissions that come with it.

In many B.C. municipalities, emissions from buildings make up the largest share of greenhouse gases. Some cities, such as Vancouver, have moved to phase out gas hook ups in favour of electrification.

But at the provincial level, progress has been slower. In 2021, the coalition’s letter called for new natural gas connections to be banned in all new and existing buildings by the end of 2022.

So far, there has been no provincial commitment to end natural gas heating in new buildings until the end of the decade. Meanwhile, there’s no plan to eliminate fossil fuel heating by 2035, and no plan to create a new Crown corporation to help retrofit existing buildings with electric heat pumps or other renewable sources of heat.

In pushing back against the coalition's failing grade, the ministry spokesperson said B.C.’s climate plan is set to cut liquefied natural gas emissions by nearly half by 2030.

“By 2030 all new buildings in the province will no longer emit carbon pollution,” the spokesperson said.

6) Track and report progress on its actions every year - FAIL

Finally, the coalition’s progress report claims the B.C. government has failed to provide enough information about its emission reduction targets and how it hopes to achieve those targets.

The progress report cites as evidence a Supreme Court case in which the BC Sierra Club has alleged the province is breaking its own Climate Accountability Act.

The case, however, has yet to be decided.

A spokesperson for the ministry claimed its plan “addresses the climate crisis head-on while remaining accountable each year with a report to the legislature.”

Saxby said passing judgment on the province’s progress in each of the 10 climate priorities was based on an expert review of legislation and government promises.

The progress report comes after an 18-month period in which climate change has taken a severe toll on British Columbia — in addition to this fall’s extended drought, a record heat wave and floods claimed the lives of hundreds of people and caused billions of dollars in damage.

“Many of our communities haven’t even been returned home.” 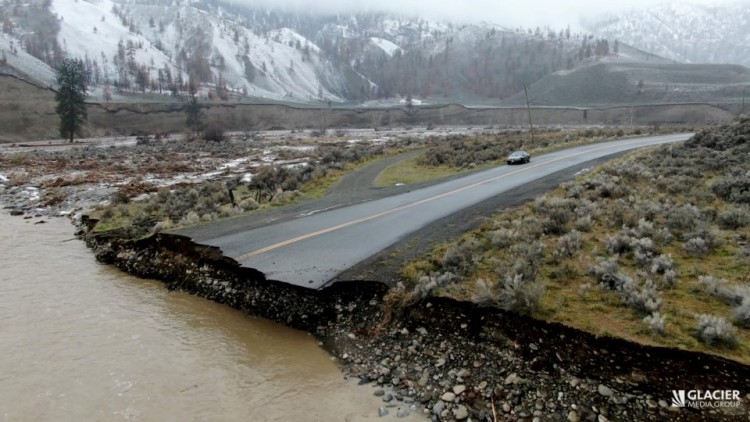 Where the province has made progress on climate change

The province hasn’t fallen behind on every front. According to the climate action report card, the B.C. government has made progress on policies or actions to:

The report points to B.C. ending its Deep Well Royalty Credit program in 2022, though other subsidies to the oil and gas industry remain.

As part of its plan to “leave no one behind,” the B.C. government has invested $134 million to fund climate action infrastructure projects in Indigenous communities and local governments.

Among other gaps noted in the report, there are still no plans to support fossil fuel workers and resource-dependent communities “through a managed wind-down,” and there remains “no comprehensive plan” to support communities especially vulnerable to climate change.

More than any area, the B.C. government has made significant progress in improving food security in the province, according to the progress report.

It’s currently developing a food security policy framework to mitigate the effects of climate change. It has also made commitments to enhance agricultural carbon sequestration, encourage regenerative agricultural practices, and support Indigenous communities to feed themselves.

Still, found the report, the province has failed to plan to reduce food waste; increase the consumption of plant-based foods; and mitigate the effects of the Site C dam on 31,500 hectares of surrounding agriculture land.

The report says the B.C. government has made progress to plan a wind-down of distance travelled in light-duty vehicles, invested in improving public transportation, and has set a goal to require all new vehicles sold from 2035 onward are zero emissions.

The September 2021 letter also called for the government to reallocate infrastructure funds from highway expansion to public and active transportation. On this front, the progress report says B.C. has failed.

“Yes, there’s been some progress, but there’s a lot more work to do,” Saxby acknowledged.

“There is a real opportunity for the new premier-designate, David Eby, to change the direction of this government.”